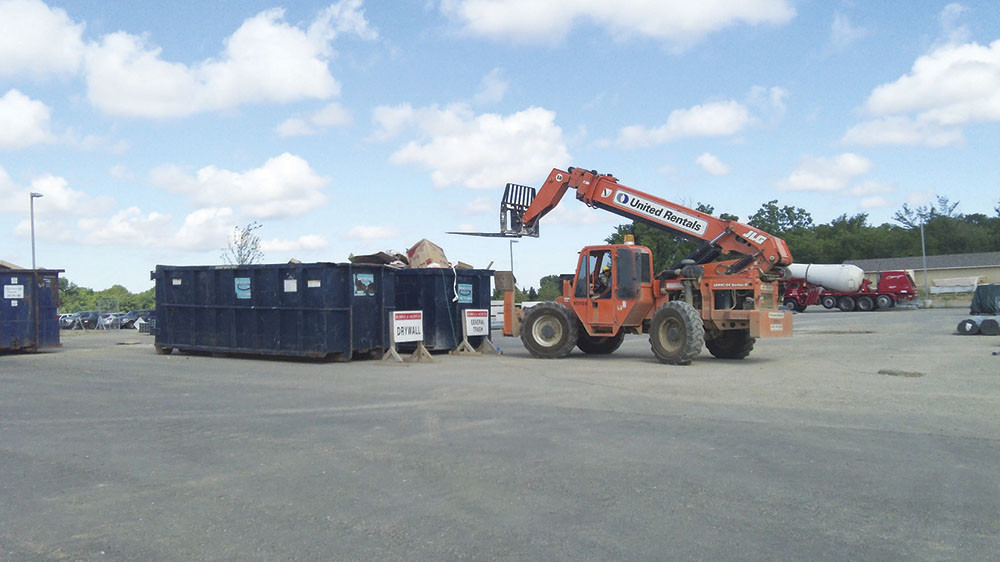 Robins & Morton tracks and measures all waste diversion and recycling on jobsites. This includes separating the construction waste by category. 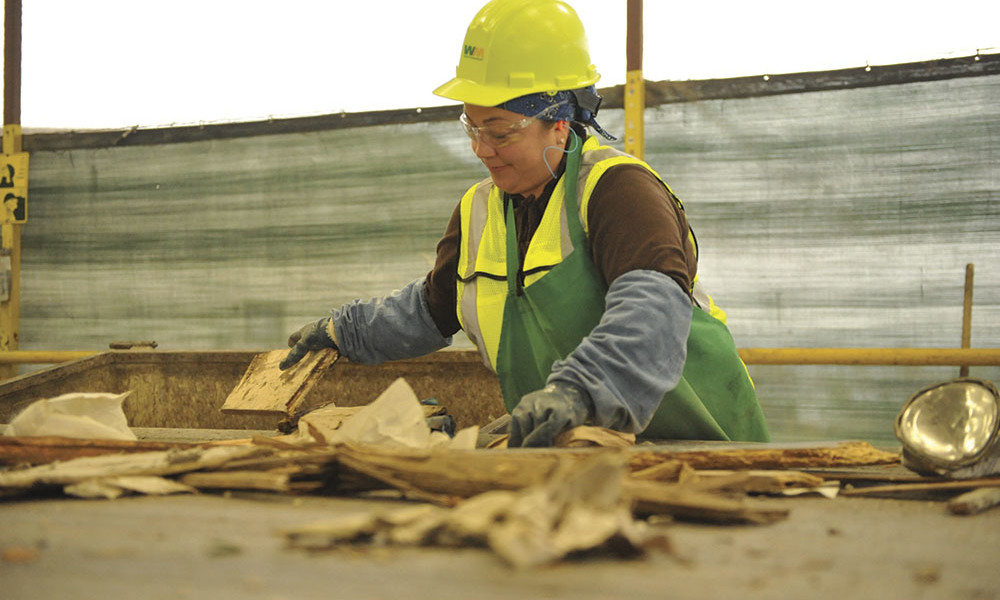 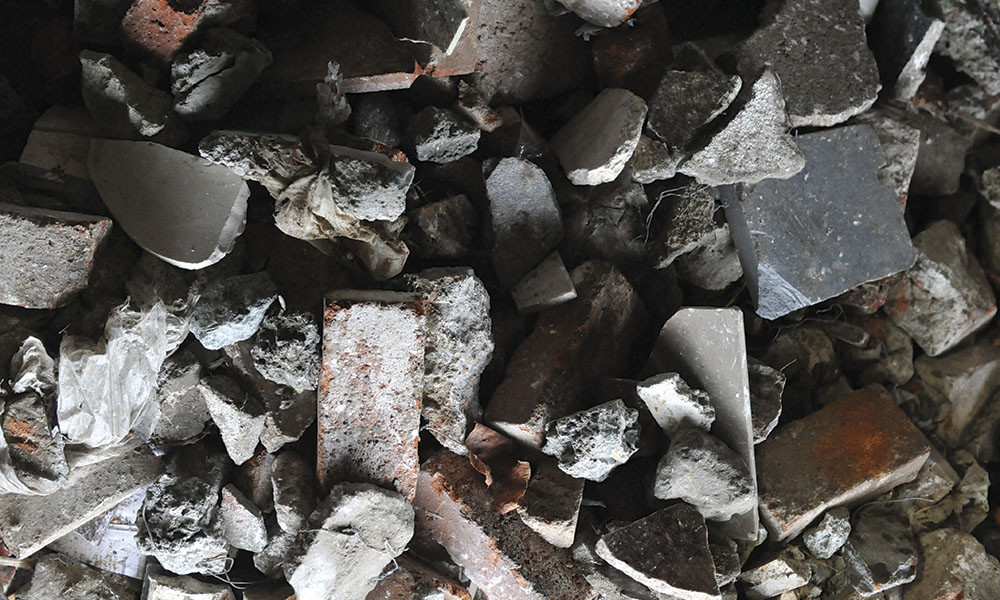 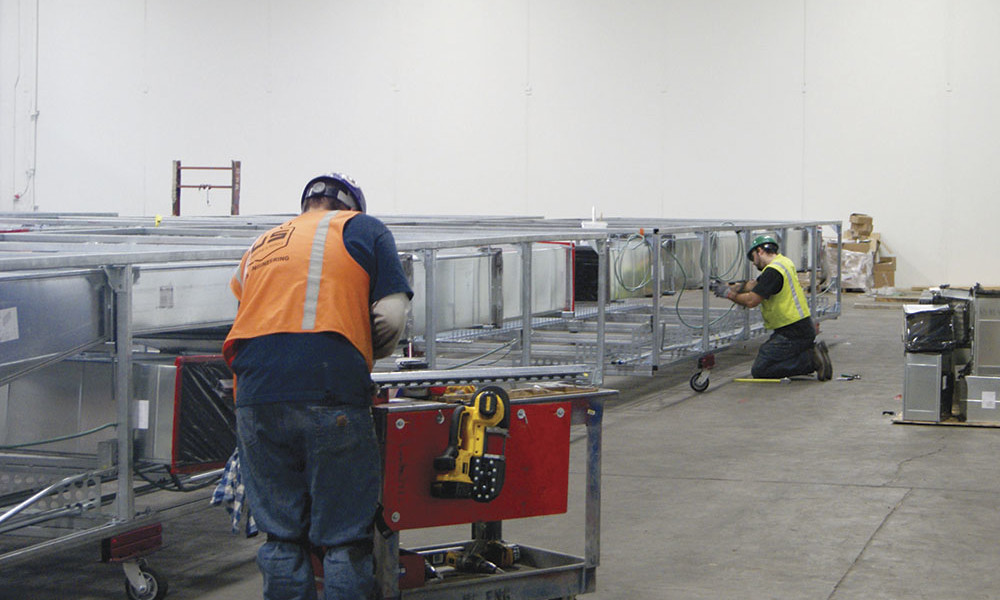 Use of prefabrication on hospital construction projects offers a number of potential benefits, including a reduction in material waste.
◀ ▶

According to the study Estimating 2003 Building-Related Construction + Demolition Materials Amounts, conducted by the Environmental Protection Agency, 4.34 pounds per square foot of waste is produced for nonresidential new construction. For a 250,000-square-foot medical facility, this equates to roughly 1.1 million pounds of C+D materials that must be removed, recycled or reused.
The Center for Maximum Potential Building Systems’ Co-Director Gail Vittori, who co-authored Sustainable Healthcare Architecture with Robin Guenther, says, “Hospital construction practices in the U.S., including construction and demolition diversion, are generally in step with other commercial construction practices and would be generally consistent with C+D generation rates.”

Vittori lists a few drivers for this:

Keeping it green
Given the abundant opportunities to recycle and reuse on healthcare building projects today, many companies are doing their part to keep it green. One example is the waste diversion efforts on the Scripps Anderson Medical Pavilion project in La Jolla, California. Roughly 70.8 percent of materials removed were recycled during construction. The project team, which included McCarthy Building Companies, employed various tactics, but perhaps the greenest strategy that reaped the most reward involved recycling concrete.

“McCarthy used existing concrete basement walls from buildings that were demolished in lieu of installing shoring to retain the earth,” said Project Manager Allen Lynn Sr.
The demolition materials on the project consisted of the following statistics:

Salvaging existing structures
Many materials can be salvaged from demolition and renovation sites. EPA recommends the reuse of large portions of existing structures during renovation or redevelopment: extending the lifecycle of existing building stock will conserve resources, retain cultural resources, reduce waste and reduce environmental impacts of new buildings as they relate to materials manufacturing and transport.
Robins & Morton was not only able to retain cultural resources and reduce waste, but also incorporate the area’s history by reusing materials on its HealthSouth Rehabilitation Hospital of Western Massachusetts project located in Ludlow, Massachusetts.

According to Jackie Mustakas, Robins & Morton sustainability manager, the 74,000-square-foot, 53-bed rehabilitation hospital was to be built on a site that was home to a rope mill in the 1800s. “When HealthSouth purchased the site, there were a series of structures still standing,” Mustakas says. “The project team noted the tremendous amount of brick onsite and decided to deconstruct the walls, clean the brick and incorporate over 100,000 salvaged bricks into the new hospital.”

Similarly, there were Southern Yellow Pine beams located onsite. Robins & Morton’s project superintendent thought these would be a nice addition to the project and took the beams to be re-sawn. The 250-board-feet of reclaimed wood is displayed on the wall of the hospital lobby and provides a warm and welcoming entrance.
Other demolition materials were crushed onsite and 4,000 yards of debris was used as structural fill and base.

“This is a typical practice for our teams to crush and reuse concrete on our hospital projects,” says Mustakas. “The reuse not only minimizes the waste that goes to the landfill, but also allows us to eliminate emissions from hauling in additional resources to use onsite for these requirements.
The waste diversion efforts helped contribute to the project’s LEED for Healthcare Gold certification.

Prefab pays off
SCL Health’s new Saint Joseph replacement hospital, located in the heart of Denver, Colorado, was carved out of the city’s largest and oldest medical campus and sits on the former children’s hospital site. This was accomplished, to some extent, by highlighting Lean as part of waste reduction.

According to Brandon Bergholz, Mortenson Company’s senior project manager for the replacement hospital, “We looked at prefabrication strategies as part of Mortenson’s interest in advancing Lean practices and as part of the overall Lean initiative for the new Saint Joseph Hospital. It made sense for sustainability and eliminating waste on so many fronts: the aggressive schedule, cost savings, offsite construction benefits, including reducing waste and reducing labor congestion onsite.”

Bergholz continues, “By building these components offsite, we were able to reduce cost by saving time on schedule and reducing the potential for injuries by working at the ideal work levels.”
Benefits of prefab on this project resulted in:

“The entire team, including designers and trade partners, worked together to prefabricate or build over 1,300 components offsite,” Bergholz says. “The results in our [prefab] study show the returns.” To download the study, visit mortenson.com/prefab-study.

Although there was not a huge impact on the overall waste reduction, it was meaningful to both the owner and the stakeholders that Mortenson was able to repurpose 2,000 square feet of stained glass salvaged from existing stained glass artwork in the chapel of the former Saint Joseph Hospital (which was operational and adjacent to the new hospital until it opened) and was used in the skylight in the new chapel that is part of the overall new Saint Joseph Hospital.

As more companies employ green building efforts to meet LEED certification and/or sustainability goals, it’s a win-win for the environment and future generations to come.