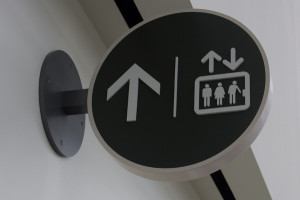 From the first step when visitors enter the new hospital, wayfinding clues abound. Five interactive touch-screen computer displays opposite the front doors greet guests as they approach the front desk. The information screens offer assistance in both English and Spanish, the predominant languages spoken by Parkland visitors.

The screens also use symbols and images to guide the user through a menu of options to help them find their way. Programmed like many familiar cellphone apps, they provide simple verbal and visual directions and maps to the desired destination. Because they are paperless, the lobby screens also eliminate litter.

Signage throughout the new hospital includes universal symbols based on a program called “Hablamos Juntos,” meaning “we speak together.” Symbols identify everything from restrooms to gift shop, imaging services to pastoral care. Parkland’s design team developed the majority of the icons used throughout the building to meet the hospital’s unique needs.

Colors are another subtle but important route-finding feature. From the main lobby, visitors have only two choices of elevators to take them to patient floors above – the gold elevators that lead to the Serena Simmons Connelly Tower, home to Women and Infants Specialty Health services, or the blue elevators that provide access to the acute care tower housing medical and surgical patients.

With 862 private patient rooms, the room-numbering system at the new Parkland also needed to be simple. The first digits represent the floor number, followed by a hyphen and room numbers. For example, 12-402 represents room 402 on the 12th floor. Signs greet visitors as they exit the elevators on each floor, providing additional directions to rooms and services.

A special wayfinding system was incorporated into the neonatal intensive care unit. In keeping with the mission of ‘bringing the park back to Parkland’ and to enhance the healing aspects of nature found throughout the new hospital, the 96 private patient rooms in the NICU are grouped into “Lake” and “Forest” zones. There are eight “pods” of 12 rooms each in the NICU; hallways and rooms are clustered by fish, frog, dragonfly and duck symbols in the Lake section, and by bear, bird, deer and rabbit symbols in the Forest area.