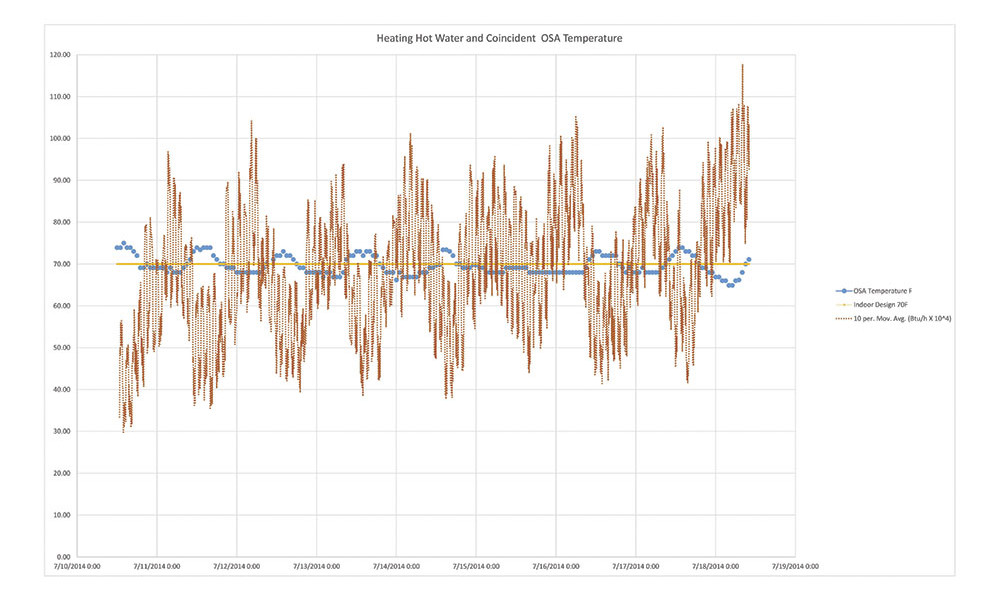 Energy efficiency is a pressing area of concern in the modern healthcare industry. On one hand, unlike many other industries, hospitals have stringent health and safety requirements that make energy reduction difficult.

In addition, certain portions of hospital buildings may be required to maintain cooler temperatures and higher air-change rates just to meet minimum code requirements. Given specific state or federal guidelines outlining the protocols for hospital mechanical designs, it becomes challenging to find areas where potential energy savings are possible. However, these savings are possible and the return on investment is high for those hospitals willing to investigate the opportunities.

One of the most common areas that facility managers will investigate for energy inefficiency measures is the hospital central plant. After all, the plant is working overtime to support the constant cooling, heating and emergency power needs for spaces typically spanning hundreds or thousands of square feet. Still, while the plant itself is a large source of energy use, it’s not the only one to be considered. Some of the highest savings can be found simply in analyzing systems controls and airflow management.

P2S recently completed a study of a San Diego, California area hospital’s central plant. Through testing, it was determined that simultaneous heating and cooling was occurring during ambient conditions above indoor temperature setpoints. This equated to 10 percent of the chilled water plant’s tonnage output at any given moment. This hospital, like many others, have constant volume air handling systems with hot water reheat for temperature control at the zone level.

The facilities management team decided to look at its entire system to determine how much reheating was happening throughout the hospital. What they found is that the supply air temperature control of air handling units was generally set to a constant temperature in the low 50s, with a reset function based on zone demands. This resulted in the maximum reheating of all airflow in the hospital at all times. This “setting it and forgetting it” method was forcing constant cooling and reheating of air, which in turn caused energy costs to remain unnecessarily high.

Selecting critical zones and using them to reset air handler supply air setpoints reduces chilled water demands. This does mean that a program of getting critical zones tied into the building control system is necessary if they are not already. It is also essential that these critical zones have adequate airflows for the room loads that they serve so the zone is not indicating a 100 percent cooling demand at all times.

Additional measures were implemented to control overall chilled water system pressure setpoints in order to maintain adequate control valve operation. By monitoring the ambient dry bulb and dew point temperatures, the chilled water plant pressure control setpoint could be adjusted up and down throughout the day based on the change in these ambient conditions. The range of pressure for this facility at a remote location from the plant was as low as 4 PSI during nighttime winter months and as high as 18 PSI during the daytime in the summer months.

The control strategy has two rates of change, which reset the system pressure setpoint. The first is based upon the change in dry bulb, which is at a slower rate of change; the second is based on the change in dew point, which is at a higher rate of change. This control sequence took time along with trending data to refine the rates of change for the system. Over time, increased reductions in pumping brake horsepower resulted for many hours of the year with no loss in chilled water system performance.

The final area being considered to reduce energy consumption is directed at the airflows for unoccupied spaces. The number of required air changes varies depending on whether the room is occupied or unoccupied, and the difference can be significant. In California, the requirement for an operating room with re-circulated air varies from a maximum of 20 air changes to a minimum of just six. This means if the building controls or sensors are not set to limit air changes when the room is unoccupied, the system will continue to change air at the maximum levels, thereby costing the hospital money in excessive airflow and added brake horsepower at the fan.

The hospital learned all these energy-conservation measures require the zone level controls and airflows be functioning correctly to implement. So when most facilities are looking to add more central plant equipment to solve capacity problems, this facility looked at controlling airflow, temperature and system pressure to limit capacity requirements and improve overall system efficiency.

Although the 24/7 nature of the hospital presents difficulties when it comes to energy savings, there are still many savings to be realized, even beyond efficient central plant design. By analyzing connected loads and the flow of energy throughout a building, as well as the system controls in place to guide these flows, hospitals can find extraordinary savings. Even more, because hospitals are designed to last decades, such studies present a solid return on investment — ensuring savings now and long into the future.