Sutter Health has built several hospitals in the California Bay Area over the past 15 years, but its Santa Rosa Hospital expansion is the first to use leftover construction materials to help the homeless. The re-purposed materials are being used for a small sleeping pod, part of a program that offers a temporary refuge for homeless people and residents of San Francisco’s Tenderloin district. The material was originally part of an exterior mock-up that allows pre-construction teams to test finishes, connection and watertight performance for the outside envelope of the building. 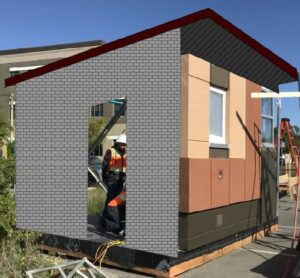 HerreroBoldt, general contractor on the Sutter Hospital expansion, initiated the proposal idea to repurpose construction materials from project mock-up to a sleeping pod. The idea was inspired by a recent presentation from the Lean Construction Institute on eliminating building waste.

The newly built sleeping pod has been added to a 5-acre retreat on Little Valley Road, Fort Bragg, operated for more than 22 years by San Francisco City Impact. The faith-based organization has a rescue mission in the Tenderloin district, along with a school, volunteer center and other programs that serve the homeless, the elderly and families in need. Learn more at boldt.com.