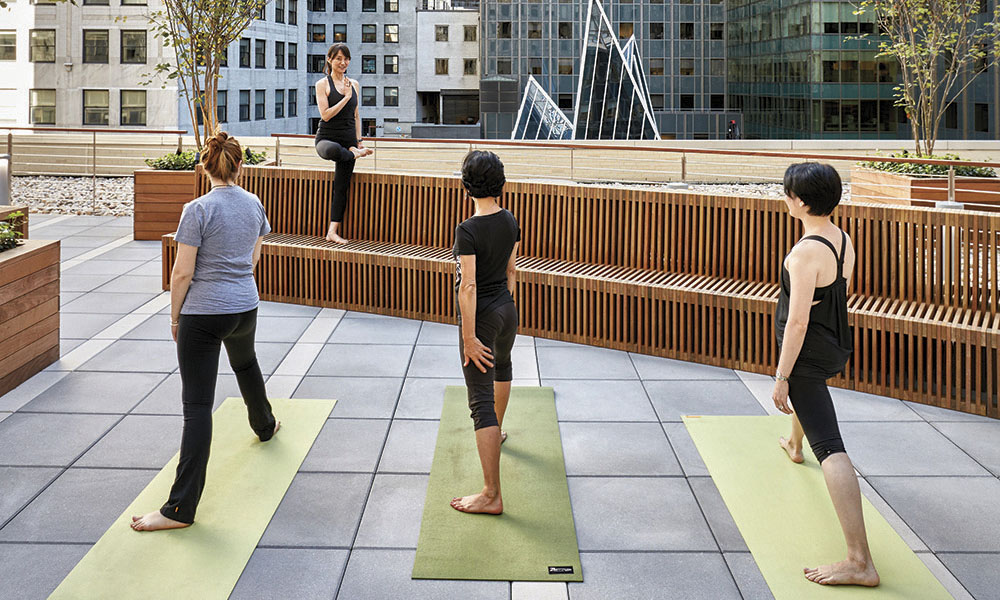 Making Well-being a Priority Spaces such as terraces, balconies and courtyards can function as areas for recharging or quiet contemplation. Photo: Garrett Rowland 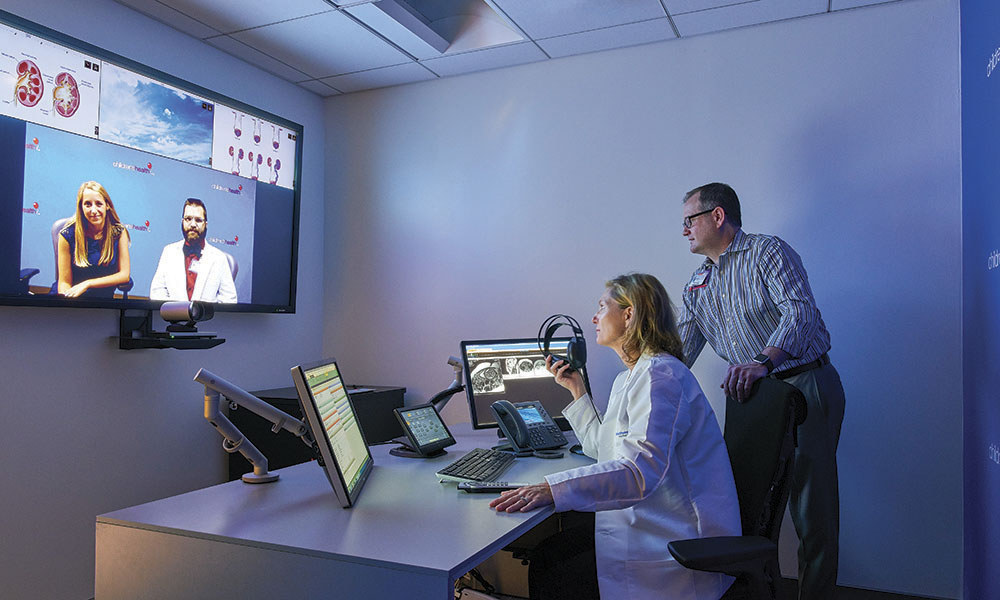 Telemedicine can take the form of live video interface between patients and practitioners, remote monitoring or the storing and forwarding of patient data. Photo: Ryan Gobuty 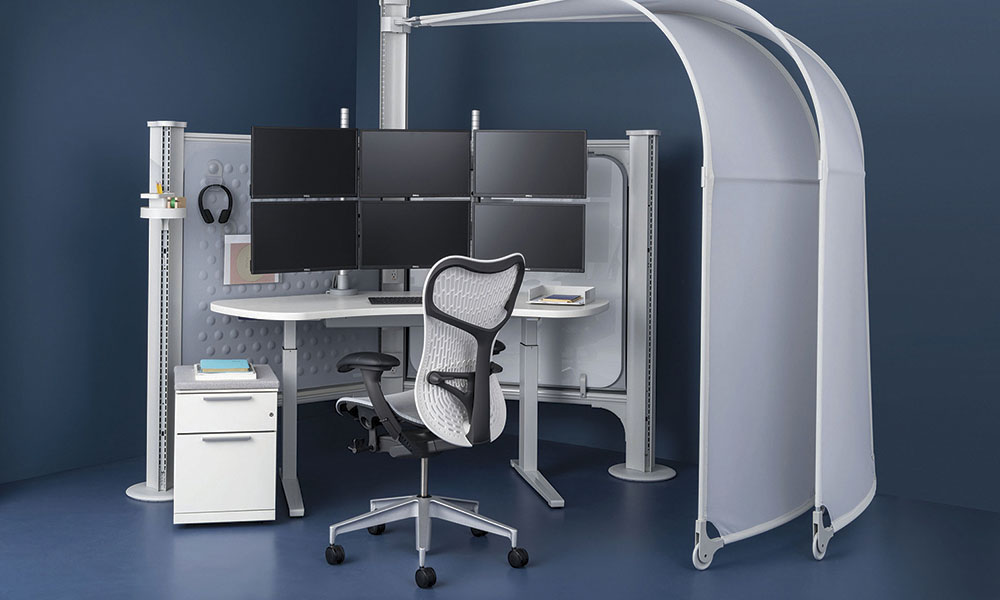 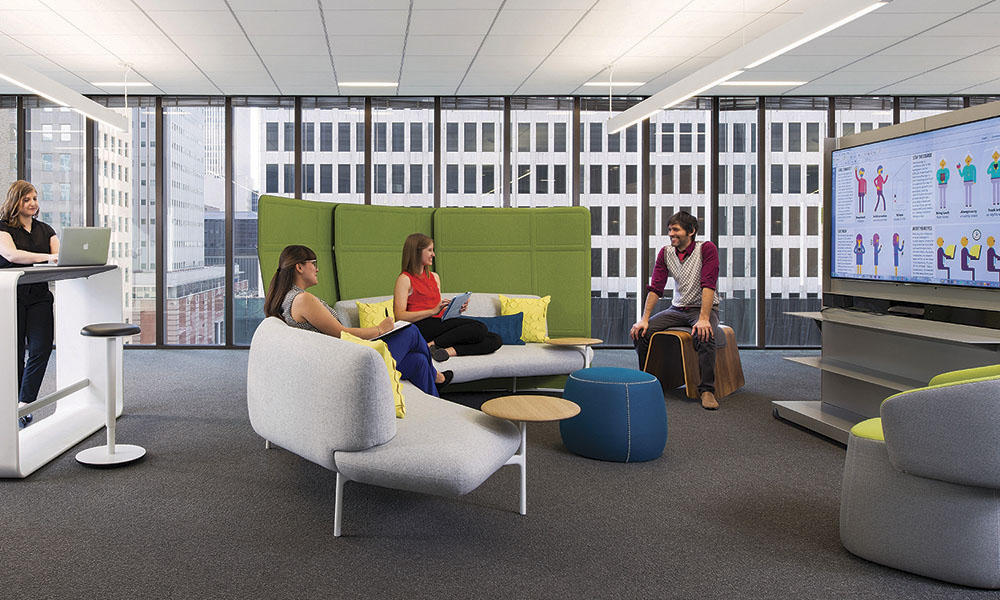 A variety of formal and informal gathering spaces should be a feature of each telemedicine facility floor. Photo: Ryan Gobuty
◀ ▶

Thanks to its cost-savings potential, negation of distance and time, delivery of easier access to healthcare specialists and technical wizardry, telemedicine is being hailed by many as a revolutionary force. At the very least, telemedicine interactions — which can take the form of live video interface between patients and practitioners, remote monitoring or the storing and forwarding of patient data — are set to explode in volume: by 2024 the number of virtual doctors’ office visits will surpass the number of physical visits.1

Already, the growth of this new form of interaction has given rise to a new typology: the large-scale telemedicine facility. As a juror for the AIA/AAH Healthcare Design Awards, I’ve had the opportunity to look closely at one of the first of this new breed — the 125,000-square-foot Mercy Virtual Care Center, which we’ve selected as the first telemedicine facility to be honored with an AIA healthcare award. Located in Chesterfield, Missouri, Mercy Virtual offers a diverse array of telemedicine services, from home monitoring to electronic intensive care to basic virtual hospital care. But at its core, the facility is something of a mash up of workplace and call center. Yet it’s a mash up that addresses the needs of its inhabitants. As noted in jury comments, “This project recognizes the humanity of the healthcare worker.”

Also, such facilities will need to enable secure, reliable and around-the-clock operation, in much the same fashion as mission-critical facilities. Thus, another layer is added to an already complex typology.

With an eye toward addressing the many overlapping needs of tomorrow’s large-scale telemedicine facilities, what follows is a set of key design recommendations that touch on everything from workplace design to occupant well-being to systems reliability.

If telemedicine becomes a titanic industry changer, it will do so in large part by its enabling of genuine human connections — between practitioners and patients separated by vast distances, as well as among practitioners separated by just a few feet. Such fostering of human connections presents a significant design opportunity. Large-scale telemedicine spaces that get it right will enable healthy, happy and meaningful experiences for practitioners, resulting in more effective delivery of quality care.

But with sizeable workforces, these facilities need to be planned to create a sense of intimacy; the relentless rows of workstations that afflict so many call centers won’t cut it. Instead, floorplates should be broken up into neighborhoods, or small groupings of workstations. These groupings help to humanize the scale of large floorplates. More importantly, they help practitioners more easily connect with each other when not videoconferencing. Human nature is such that people are more likely to collaborate when they feel they’re part of a small group rather than a massive collective. To that end, a variety of informal and formal gathering spaces — huddle rooms, conference rooms and lounges — should also be a feature of each floor.

Likewise, an equally important consideration is the on-camera appearance of practitioners. Cameras should be mounted so practitioners appear to look directly at patients, just as they would during an in-person interaction. If placed too low or too high, cameras will produce an awkward point of view.

Similar attention should be paid to lighting. Light sources at the workstation should produce diffused light that falls in front of the subject to reduce shadows. (Backlighting, by contrast, tends to result in a subject in shadow.) Furthermore, the on-camera background should also be well-considered. If a screening device is used, per the above recommendation, it should be pattern-free and a light, non-distracting color, such as neutral gray, to also aid in focus.

Energized and engaged practitioners are more effective practitioners. Given that many workers in large-scale telemedicine facilities will spend most of their days involved in sedentary activities, well-being concerns become even more important. However, workplace well-being efforts frequently fall short. Why? Because too often, well-being is reduced to a simple program or checklist. For it to truly work, well-being must be an overarching business strategy aimed at increasing productivity, bolstering energy and engagement and improving health and happiness. And like any good business strategy, well-being should be ongoing, targeted and essential to what defines a healthcare organization and its success.

In design terms, that philosophy translates to a holistic approach tailored to each healthcare organization’s culture. Yet there are some essentials that should be part of every well-being strategy.

For example, the importance of connections to nature cannot be overstated. Studies have shown that views to nature can reduce stress, improve concentration and boost job satisfaction.2 Spaces such as terraces, balconies and courtyards, which provide access to nature, are even more desirable because they also function as areas for recharging or quiet contemplation.

Rapidly evolving technology is a fact of life. And for a segment as tech-dependent as telemedicine, it’s key that workplaces can accommodate whatever technology comes over the horizon. No one wants to revamp a space every few years because technology keeps rendering it obsolete.

To that end, adjustable workstations that can be reconfigured easily or moved, raised access flooring that allows for power and data systems reconfigurations, and demountable partitions for conference rooms and offices will enable telemedicine facilities to reshape their spaces as needed. Additionally, universal design — i.e., one-size-fits-all workstations and offices — can imbue a space with interchangeability and additional flexibility.

The unpredictability of health emergencies necessitates heightened levels of reliability and readiness for telemedicine facilities. Much like mission-critical facilities, large-scale telemedicine buildings will require increased electricity loads, redundant backup power supply and automatic power transfer switching to ensure continuous operation no matter how trying the external circumstances may be.

Previously, considerable thought had to be put into accommodating onsite data storage. But as more healthcare systems migrate to either centralized data centers for all their facilities, or the cloud, the need for dedicated onsite data storage spaces is vanishing, thus freeing up more space for other programmatic needs.

By no means are these the only factors in the design of large-scale telemedicine spaces. For example, there is also the integration of brand, which revolves around uncovering the potential of what you are versus inventing what you should be, and the design of beta spaces that encourage experimentation and adaptation.

As more large-scale telemedicine facilities are designed and constructed, we’ll no doubt unearth more design considerations. Yet such is the nature of design: as needs evolve, so must design responses.