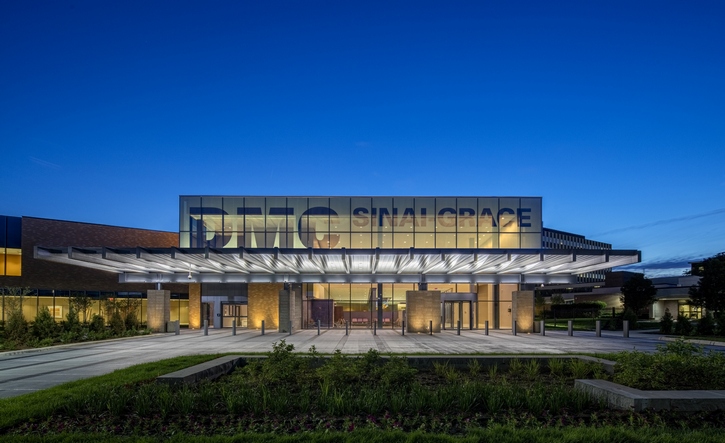 DETROIT, Mich. — The third and final phase of a $77-million renovation at Sinai-Grace Hospital at the Detroit Medical Center in Michigan has reached construction completion with a new main entrance, lobby, admitting area and radiology department. Designed by SmithGroupJJR, the three-year construction project is the largest undertaking in northwest Detroit in more than a decade.

The latest improvements resulting from the sizable, multi-year renovation and expansion program are significant to the hospital, which was originally built in the 1930s. A new main entrance, constructed of glass, burnished block and brick, was designed as a reflective glass box during the day, and glows like a lantern at night, serving to energize the urban community.

The design clearly identifies two distinct, exterior entrances: a main entry and a separate entrance for the emergency department. Inside, patients gain a clear sense of direction with areas of transparency at focus points and at transitions between the first and second floors.

The new main entrance, lobby, admitting and radiology areas represent the third and final phase of an extensive renovation and expansion program at DMC Sinai-Grace Hospital that broke ground in 2012. This final phase follows the earlier completion of a new 125,000-square-foot building addition containing a new ED (phase one), which opened in 2014, and a new intensive care unit (phase two), which opened in February of this year.

Phase One: New ED
The largest portion of the construction program was its first phase: a complete overhaul to the hospital’s emergency department, the busiest in Detroit. The new ED, now at 59,000 square feet, is more than double its previous size. Featuring separate entrances for walk-ins and ambulance arrival and 94 new patient treatment areas (including 42 hard-walled exam rooms), the ED provides increased security and privacy. Six nursing stations allow hospital staff to efficiently manage up to 125,000 patients each year. As a Level II Trauma Center, the new ED now has four trauma rooms outfitted with advanced lifesaving equipment for patients needing maximum medical care. The new department includes a confidential psychiatric crisis center and special treatment areas for geriatric and pediatric patients. Phase one completed in February 2014.

Exterior materials for the new addition feature a burnished, orange brick that closely matches that of the original Grace Hospital Building. The upgraded-yet-durable finishes for the high-volume, public spaces include the burnished brick, which serves to provide a strong inside/outside connection; terrazzo flooring and base; wood veneer wall covering and wall tile.