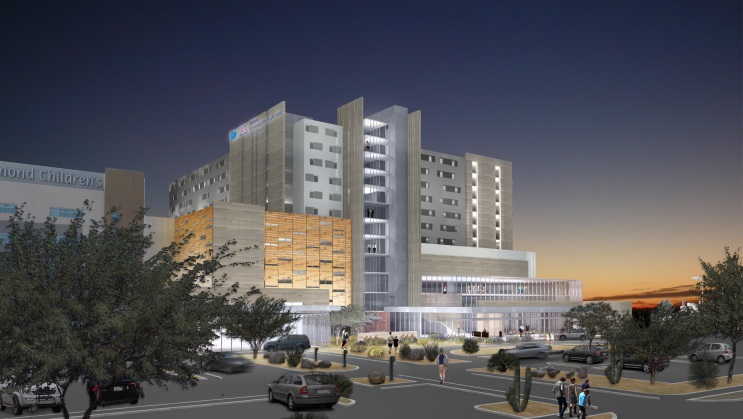 TUCSON, Ariz. – The contract for the design of the new Banner – University Medical Center hospital facility in Tucson, Arizona has been awarded to Shepley Bulfinch architects, in association with GLHN Architects & Engineers, Inc. of Tucson. The 11-story tower is scheduled for completion in 2019.

This news follows Banner’s acquisition of the University of Arizona Medical Center, which was finalized on Feb. 27.

“We are honored to be working with Banner Health as they rebuild the core of the hospital,” said Shepley Bulfinch’s David Derr, AIA, principal-in-charge for the project. “Both Shepley and GLHN know the University Medical Center well from our previous work, and we understand its importance to the residents of Tucson and surrounding communities.”

Shepley Bulfinch brings national expertise in academic medical center design to the project, with clients that include Yale-New Haven Hospital and Dartmouth-Hitchcock Medical Center. The firm prepared the master plan for the new facility and completed the hospital’s surgical services renovation and expansion in 2013. Also in Tucson, Shepley Bulfinch worked with city officials and community stakeholders on the development of the Main Gate Overlay District near the University of Arizona campus.

GLHN has collaborated on significant local projects, including the Streetcar Maintenance and Storage Facility and Pima County Courts Complex, both integral to the city’s downtown redevelopment efforts. The firm has provided services to the healthcare industry for over 40 years, working at over 120 VA medical centers nationwide and renovating more than 100 areas on the University of Arizona Medical Center campus.