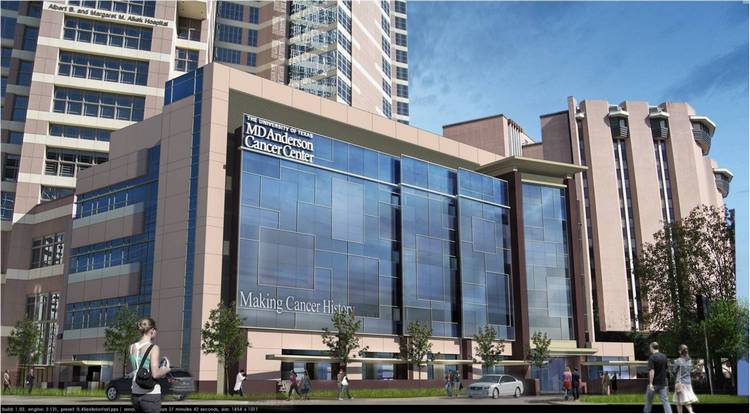 HOUSTON, Texas — McCarthy Building Companies, Inc. recently topped out on The University of Texas MD Anderson Cancer Center – The Pavilion project in Houston, Texas. The pavilion is a design-build, horizontal expansion of the Albert B. and Margaret M. Alkek Hospital in the Texas Medical Center. The scope of the pavilion project adds an additional 185,000 square feet to the hospital. The topping out ceremony marked the completion of the highest point of construction on the jobsite and was celebrated with a company-catered lunch, gifts and recognition ceremony. In attendance were more than 250 guests, including construction workers, designers, engineers and MD Anderson staff. According to the current claims information for the project, it has been one of the safest projects that MD Anderson Cancer Center has ever had in The University of Texas Rolling Owner Controlled Insurance Program. The pavilion will be an eight-story facility with basement, which will interface and be interconnected with the Alkek Hospital and the Lutheran Hospital buildings. The pavilion will contain eight diagnostic imaging rooms, six operating rooms, surgical waiting rooms and the expansion of perioperative support services–sterile supply and sterile processing. Additionally, it will act as the brand new entrance lobby and covered driveway for the entire hospital. The project began in the spring of 2013 and is scheduled for completion in late 2015.

The project architect is HKS, Inc. of Dallas. In addition to the pavilion project, McCarthy’s roster of healthcare projects with MD Anderson includes the MD Anderson Alkek Hospital expansion. Completed in 2011, the $240-million design-build project included a 12-story vertical tower expansion placed on top of the existing 12-story Alkek Hospital; this was one of the firm’s most challenging healthcare expansion projects to date. McCarthy also completed the MD Anderson Alkek infrastructure upgrade project consisting of retrofitting seven existing air handler units with “fan wall technology.” The work took place on the eighth floor of the Alkek Tower and required temporary air handling units to backfeed the existing units while the retrofitting was taking place. Additionally, McCarthy worked on the MD Anderson Children’s Cancer Hospital renovation, renovating the ninth floor of the Alkek Tower where McCarthy originally completed the 12-story vertical expansion. Photo courtesy of McCarthy. Rendering courtesy of HKS, Inc.