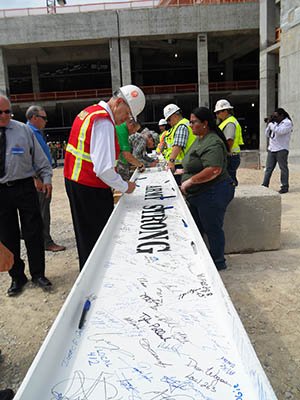 The Balfour Beatty | McCarthy team is providing design-build services for the 947,000-square-foot project, which will replace the existing Carl R. Darnall Army Medical Center and provide a new, state-of-the-art healthcare facility for service members and their families. The design-build process is greatly benefiting the project, saving time and money due to increased efficiency, removing at least two years from the construction timeline.

“We are excited to celebrate this project milestone with U.S. Army Corps of Engineers and our other project partners. We look forward to completing this highly sophisticated facility that will provide top-tier healthcare services to active duty soldiers, veterans and their families, as well as the surrounding community of Fort Hood,” said Michael J. McWay, president of McCarthy’s Texas Division and chairman of the Balfour Beatty | McCarthy Management Committee. “The design-build process, in conjunction with our decades of experience in the healthcare industry, has enabled the team to build a coordinated, high-quality facility that meets the government’s budget and schedule.”

“The Balfour McCarthy/HKS design-build team has worked diligently to reach this important milestone. We are proud to be part of this collaborative team and honored to build this world-class facility for the service men and women and their families who sacrifice so much for our country,” stated Doug Jones, regional CEO for Balfour Beatty Construction.

“None of this could take place if not for the extraordinary efforts by a dedicated and talented team. This team has combined to create a level of synergy that is difficult to match,” added Colonel Charles Klinge, commander, Fort Worth District, USACE. “This team has also consistently provided a realistic level of workmanship throughout all phases of procurement, fabrication, construction and installation of equipment and facilities.”

The topping out event signifies completion of the highest elevation point of construction. The project’s onsite building team joined members of USACE, HFPA, MEDCOM and more than 800 workers to sign the last beam to be put in place, inscribed with the words “Build Strong. Army Strong.” The beam was hoisted into place during the ceremony, and as it was lifted into the air, the audience shouted, “I am safety!” 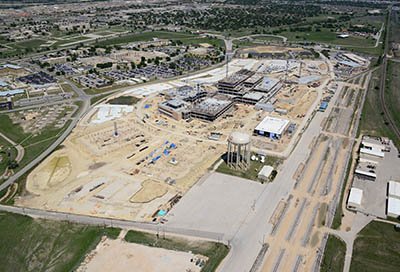 The project sits on a 72-acre site and will include a six-story hospital tower, two two-story outpatient clinics, one three-story outpatient specialty clinic, ambulance garage, logistics building, central utility plant and three parking structures. Darnall serves roughly 45,000 active duty personnel and nearly 125,000 military family members and retirees within a 40-mile radius. More babies are born at Darnall than any other DOD facility. Darnall has been active in the treatment of soldiers and their families during the Global War on terror. This new facility will serve America’s soldiers of the 21st century in a world-class hospital. Darnall is being designed and constructed with a goal of maximum flexibility to keep pace with the community’s increased healthcare needs. Due to the hospital’s forward-thinking design and construction, another two floors can be added at a later time, if needed. The choice of the concrete structural system allows for longer bays, which will allow for greater ease of adoption to future changes in healthcare technology.

The installation of interstitial space also serves to make future expansions more streamlined and seamless. Mechanical, electrical and plumbing systems are housed between the regular-use floors so improvements and changes can be made without disturbing patients and staff in the floors above and below. As a result, hospital suites and other spaces can be easily renovated without affecting MEP systems, yielding a reduced lifecycle cost.

The project also saved time and costs through the use of insulated precast panels in the façade. When the panels are erected, the façade will be complete – the brick is already cast into the panels, which cut down on the time of enclosure.

The use of state-of-the-art technology has also translated into cost savings for the project. The Balfour Beatty | McCarthy team has maximized the use of Building Information Modeling tools and mobile apps in the field, including AutoDesk BIM 360 Field and prefabrication techniques to help facilitate collaboration and coordination of all project aspects during design and construction while improving decision-making and expediting progress.

The new medical center was designed to meet USGBC LEED-Gold certification requirements. Key sustainable measures include more than 30 percent reduction in energy use over ASHRAE Standard 90.1; utility use reduction of 55 percent over the existing hospital due in part to daylighting and a green, planted roof; 50 percent water reduction for irrigation use due to drought-tolerant landscaping and 30 percent decrease in water usage for plumbing systems with high-pressure, low-flow plumbing fixtures. In addition, the new facility will utilize a 100 percent dedicated outside air system, which will improve overall indoor air quality and eliminate recirculation of air within patient care areas.

Other green features include Forest Stewardship Council certified wood used on all of the doors and millwork, power metering, recycled construction materials and low-volatile organic compound paints, adhesives and sealants.

Construction is scheduled for completion in July 2014, with operations set to start in summer 2015.