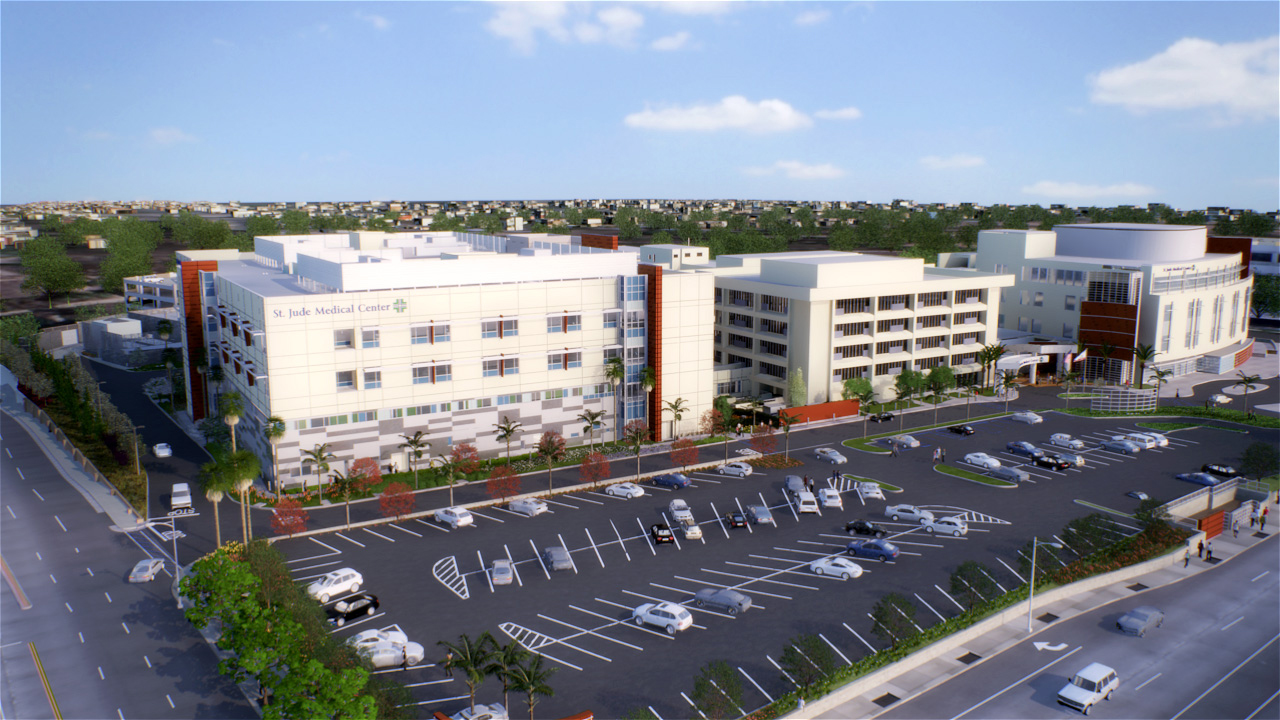 FULLERTON, Calif. — The St. Jude Medical Center patient tower project recently reached a major construction milestone when iron workers secured the final structural steel beam atop the four-level structure. Located on the northern side of the existing medical campus at Bastanchury Road and Harbor Boulevard, the $285.4-million hospital tower project is 35-percent complete and three days ahead of schedule. Construction began on the project in September 2011.

The hospital celebrated the tower’s topping out on June 26. During the celebration, a ceremonial steel beam, which had been signed by hospital employees, donors and project team members, was lifted 85-feet high and then secured to the top of the structure. A common practice in most topping out ceremonies, an American flag and evergreen tree adorned each end of the beam as it was raised and set in place. The flag signifies a united effort by the project team and the evergreen tree symbolizes growth, life and good luck for the construction workers and the building’s future occupants. 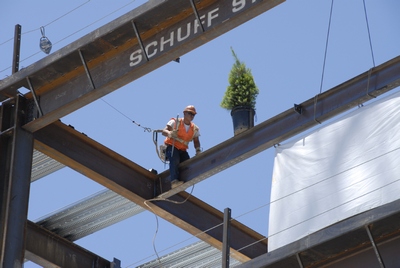 team. A banner signed by those involved in the project and an Iron Worker’s Union banner were attached to the final steel beam and lifted to the top of the structure. During the event, McCarthy gave a safety award to Schuff Steel’s foreman for his efforts to help ensure a safe work environment throughout steel erection.

An integral part of the St. Jude Medical Center’s multi-phased master plan, the Northwest Tower project includes construction of a 200,000-square-foot, four-story acute care building with a connecting bridge to level four of the existing hospital buildings and a 14,000-square-foot central utility plant. Along with architect International Parking Design, McCarthy is adding 215 parking spaces to an existing 455-car parking structure that the firm built in 2004.

In order to meet strict California seismic regulations in compliance with Senate Bill 1953, the tower is being built with a lateral force-resisting system consisting of buckling restrained braced frames with moment resisting beam to column connections. Additionally a lateral foundation system is being built with continuous anchor caps in conjunction with tie-down anchors.

Featuring sophisticated technologies and innovations in patient-centered care, the new 120-bed patient tower will house: private and semi/private rooms with flat-screen TVs and comfortable daybeds for family members; computers in every patient room permitting physicians and nurses to review and update medical records without leaving the patient’s bedside; 14 operating rooms with state-of-the-art “smart” surgical suites and the newest improvements in minimally invasive and robotic surgeries and advanced information systems allowing immediate clinician collaboration. The tower will also include a spacious cafeteria, pharmacy and areas for support staff. The project is scheduled to complete in summer 2014 and open in fall 2014.