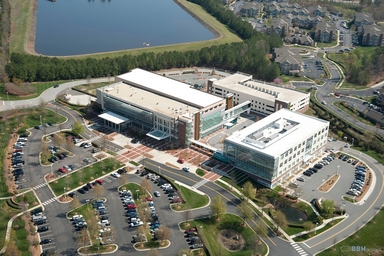 With an anticipated opening date of October 2013, WakeMed North Hospital will be a 61-bed acute care hospital with a focus on inpatient women’s specialty services, offering a full range of obstetric and gynecological services, including comprehensive preventive, diagnostic and therapeutic care. The facility will continue to serve men and children through the existing emergency department, outpatient surgery, imaging, lab and physician services already offered at the facility.

“Transitioning to a hospital is the next logical step as the infrastructure is already in place and the community has a critical mass of 262,000 residents living within a seven mile radius of the facility.  While the hospital will initially open with a women’s focus, our plan is for it to continue to expand to meet the needs of women, men and children alike.”Atkinson continued.

The addition of a hospital to any community is always a significant boost to a community’s economy. Construction is predicted to create 500 construction jobs and will increase the current 150 employees to 442 full-time equivalent employees by the second year of hospital operation with an average salary of $48,760.

WakeMed received approval to add 41 licensed acute care beds to WakeMed North Hospital in 2009. These beds were in addition to the 20 acute-care beds already approved for relocation from WakeMed Raleigh Campus, making the total bed count for WakeMed North Hospital 61. The inpatient beds will be constructed in an approximate 90,000-square-foot addition to the existing North Healthplex. The cost of the project is estimated to be nearly $62 million.