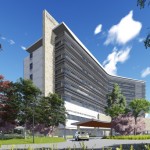 RALEIGH, N.C. — WHR Architects recently celebrated the topping out of the North Carolina Heart & Vascular Hospital at the construction site of the new facility in Raleigh. END_OF_DOCUMENT_TOKEN_TO_BE_REPLACED 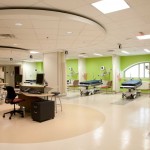 ATLANTA, Ga. — With heart disease being the leading cause of death in Georgia and around the country, the need for advanced cardiac care services has never been more critical. Grady Health System took a major step forward in meeting this challenge with the opening of the Correll Cardiac Center. END_OF_DOCUMENT_TOKEN_TO_BE_REPLACED

McCarthy was retained by the Grossmont Healthcare District, with CEO Barry Jantz and the publicly elected GHD board members providing oversight. Sharp HealthCare is the operator of Grossmont Hospital through a 30-year lease that was executed with the district in 1991.

Proposition G, a $247-million bond measure approved by voters of the East County region in June 2006, is funding the project, budgeted at $26,325,383 in construction costs. As proposed in the hospital’s Facilities Master Site Plan, Prop. G is funding several other infrastructure construction improvements at the publicly owned hospital, which opened in 1955.

Designed by KMD Architects, the Grossmont Hospital Heart and Vascular Center will be a cast-in-place, concrete structure with spread footings and a structural steel moment frame, with one level below ground and two levels above. Construction of this facility will allow for expansion of the hospital’s existing surgery department and provide new multipurpose procedural rooms with the flexibility to support a wide range of specialties including general surgery, minimally invasive surgery, image-guided surgery and endovascular interventional procedures.

When completed in March of 2015, the building also will house a pharmacy, laboratory and covered walkway connection to the existing Women’s Center on Level A, as well as a new loading dock and materials management services area on Level B. The new building will allow for the relocation of the hospital’s pharmacy and clinical laboratory space to meet current seismic criteria.

“The new facility is being built on a tight site within a small footprint of the busy hospital campus, presenting access challenges for work crews, material and equipment,” said McCarthy Project Director Jason Mrozek. “We’ll also be creating tie-ins to the existing hospital, which will call for a carefully coordinated and closely managed construction schedule to minimize any disruption to campus operations.”

All told, this project encompasses shoring, foundations, structure and build-out of Levels A and B. Level 1 will be provided as a shell space to accommodate the future build-out of a catheterization lab and operating rooms.

KPFF Consulting Engineers is the structural and civil engineer, Randall Lamb is the electrical and mechanical engineer and Wimmer Yamada and Caughey is the landscape architect. Parsons Corporation is serving as GHD’s program manager.