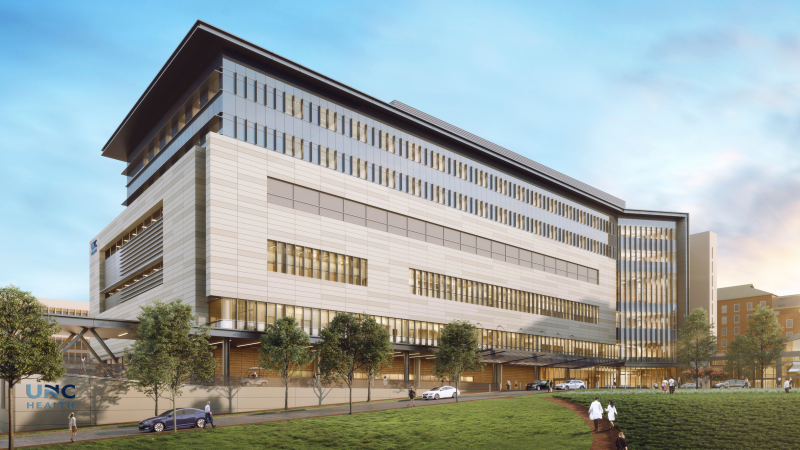 UNC Hospitals Surgical Tower in Chapel Hill, North Carolina recently topped out with a ceremony. In keeping with tradition, a steel beam was signed by executive leaders and staff of UNC Hospitals, members of the UNC Health System and the Skanska construction team. It was decorated with flags and an evergreen tree and placed atop the seven-story building. 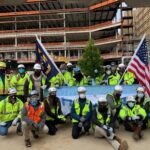 UNC Health is North Carolina’s largest academic health system and is composed of 14 hospitals and hundreds of clinic locations. The new 360,000+ square-foot surgical tower will include a basement level and will house numerous enhanced surgical spaces including:

The building will also include a main reception and visitor waiting areas on each floor, central processing, offices and conference rooms, an indoor and outdoor staff lounge and staff locker rooms.

In order to reach this milestone with the placement of the steel beam, Skanska had to ensure that the following elements were in place:

More than 2,000 workers have been trained and the project has a 250-person workforce.

Skanska’s work on the project also includes constructing patient drop-off canopies at the surgical tower and the existing children’s hospital, as well as the construction of two overhead pedestrian bridges that connect existing parking decks and the dental school building to the surgical tower. Additionally, the general contractor is providing work on a three-story service connector, renovation project at the existing ambulatory patient care facility and expansion of the café in the existing part of the hospital.

EYP is serving as project architect.