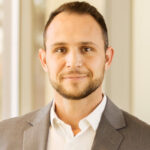 In his new role, Adams is tasked with overseeing all preconstruction and construction operations on projects, driving the preconstruction process and making sure jobs are set up correctly while collaborating with project partners.

Adams is leading the Mayo Clinic Vertical Velocity team, which is tasked with the vertical expansion of the east hospital tower valued at $145 million. He has spent all his career in the Southwest between Arizona and New Mexico and has a passion for projects in the healthcare industry. The special services group, which Adams oversees, completes roughly $10-15 million in project revenue per year.