When Children’s Hospital of the King’s Daughters opened the region’s first neonatal intensive care unit in 1972, located in Norfolk, Virginia, the tiny babies shared a 20-bed unit in a single, large room with older children who also needed intensive care.

Over the years, the NICU has gained its own space, more beds, more sophisticated technology in “pods” of six to nine babies, making it the highest level NICU in 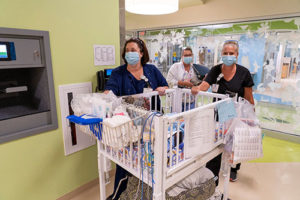 CHKD staff members move one of the hospital’s smallest patients to the newly renovated NICU.

the region, caring for the sickest, smallest babies. This past month brought the completion of the most recent renovation of the unit, bringing the latest in NICU features and advancements.

The NICU now has 50 private rooms, and 10 rooms with two beds each. The number of children who can be cared for is the same, but all 70 beds have space for a parent to rest, along with private space for bonding. Sliding glass doors and the latest technology in monitors allow NICU staff to easily see how babies are doing, and provide the latest in treatments. “These tiny babies really need more space than you would think,” said Dr. Jamil Khan, a neonatologist who is medical director of the NICU.

The trend in NICUs across the country is moving toward a more individualized environment so levels of light and noise can be adjusted to meet the babies’ needs, and parents can spend quality time with their infants. A tiny, premature baby, for instance, may need a quiet, dim environment, while older babies benefit from more stimulation, such as more light and more talk and touch from caregivers.

This renovation was five years in the making, with the first wave of babies moving in October of 2019, and the final 48 babies being transferred to the new unit this past month. Because of the delicacy of the infants, a single transfer took up to eight staff members, including doctors, respiratory therapists, nurse practitioners, nurses and others, rolling babies in incubators and cribs from the seventh floor to the fourth.

The renovated unit has a whimsical oak tree in the lobby, with a squirrel peeking out from a knothole. A family lounge area has a kitchen, room for classes on care of babies and a store where parents can “buy” books and clothing with “NICU bucks” they earn by attending classes that prepare them to take their babies home.