Edwin Beltran, FIIDA, Assoc. AIA, has recently been inducted into the International Interior Design Association’s College of Fellows. It is the highest honor paid by IIDA to its professional members, recognizing those whose activities and efforts have benefited and enhanced the organization, and whose design work has significantly influenced the interior design profession.
Beltran is a vice president of the IIDA International board of directors and principal of NBBJ’s Interior Architecture and Design Practice, leading some of the 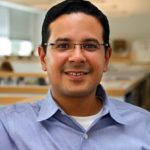 firm’s most notable healthcare interiors. Influenced by his training as an architect, his approach to interiors translates the unique “ethos” of each institution into inspiring — and beautiful — places carefully tailored to nurture healing. A strong advocate for integrated design excellence, Beltran’s multidisciplinary approach consistently promotes a close and collaborative relationship between all stakeholders.

Beltran holds an environmental design degree from the University of Puerto Rico and a master’s in architecture from The Ohio State University, where he has served as an adjunct faculty member and guest critic of the university’s Knowlton School of Architecture.