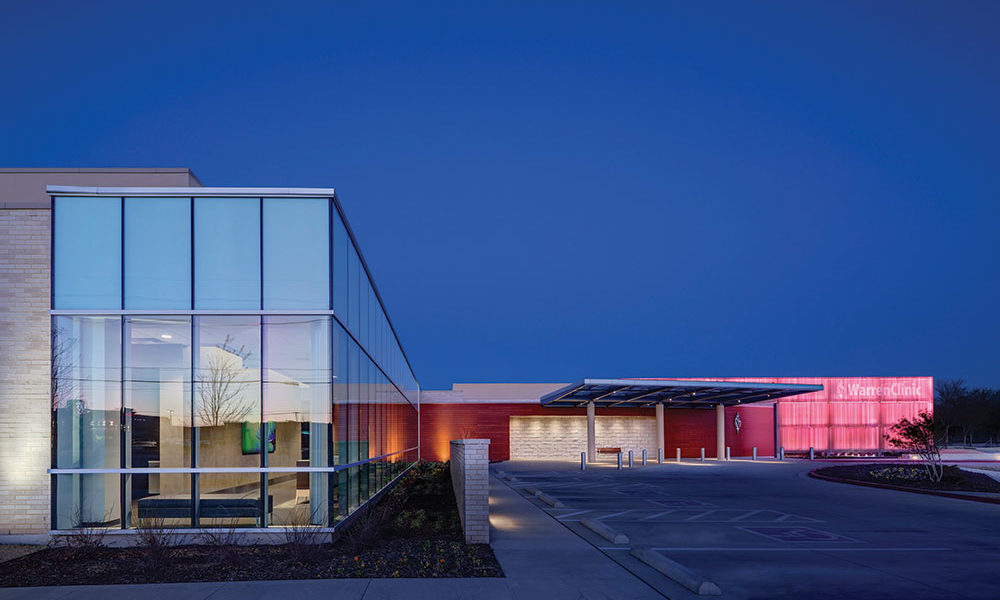 The Warren Clinic in Tulsa, Oklahoma was designed with non-invasive landscaping that requires very little irrigation. The facility is LEED for Healthcare certified. Photo by Charles Davis Smith 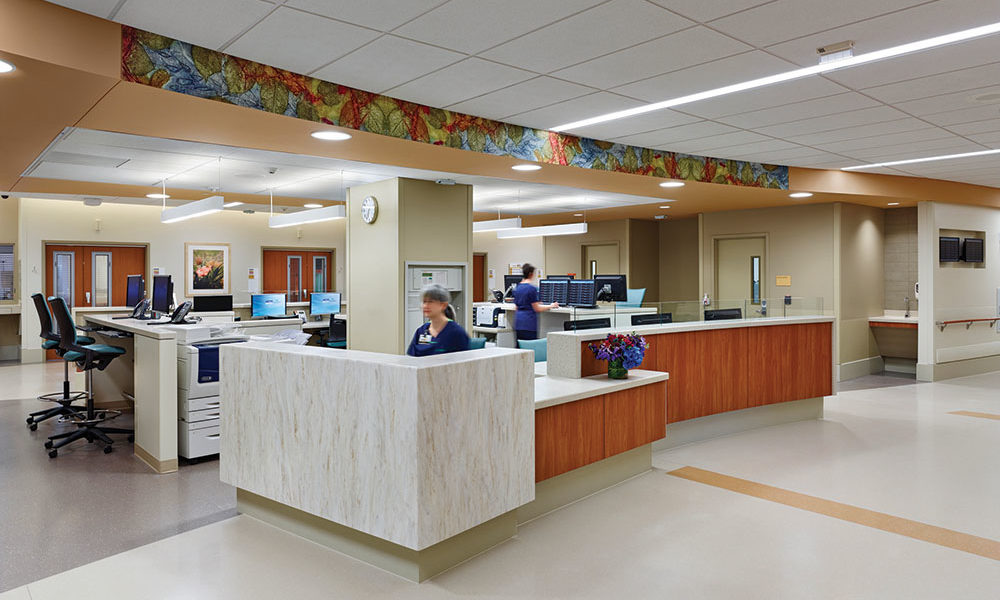 Nurse stations at Mainline Health’s Lankenau Heart Pavilion in Pennsylvania are equipped with motion-activated sinks that regulate the amount of water used for hand-washing. The facility received LEED Silver certification. 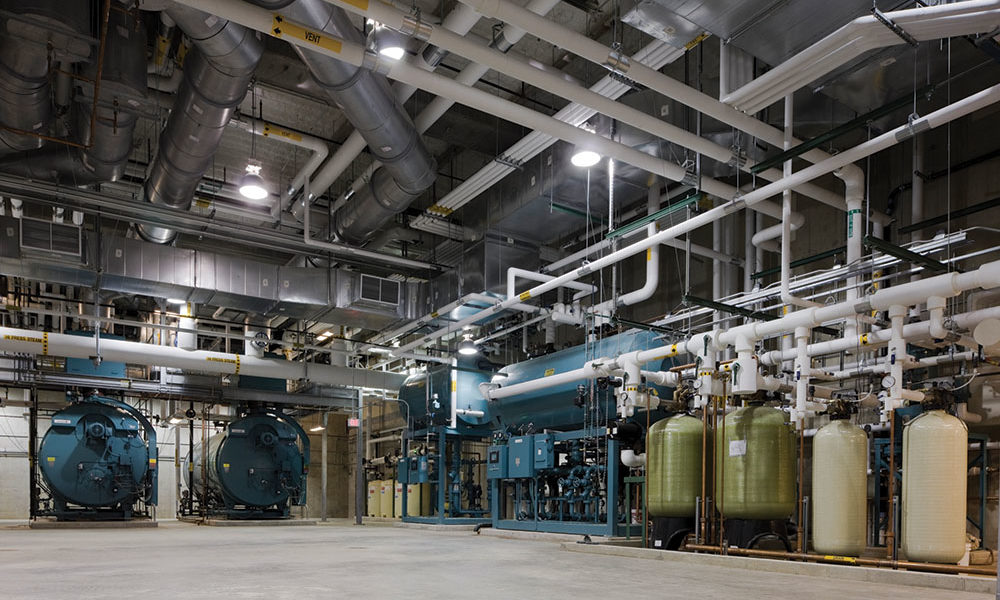 The energy plant at the Lankenau Medical Center Patient Pavilion for Heart, Vascular and Lung Care uses variable speed fans and economizers to help reduce energy use. A steam-driven chiller is used for peak shaving for a utility demand response program. Photo by David Whitcomb 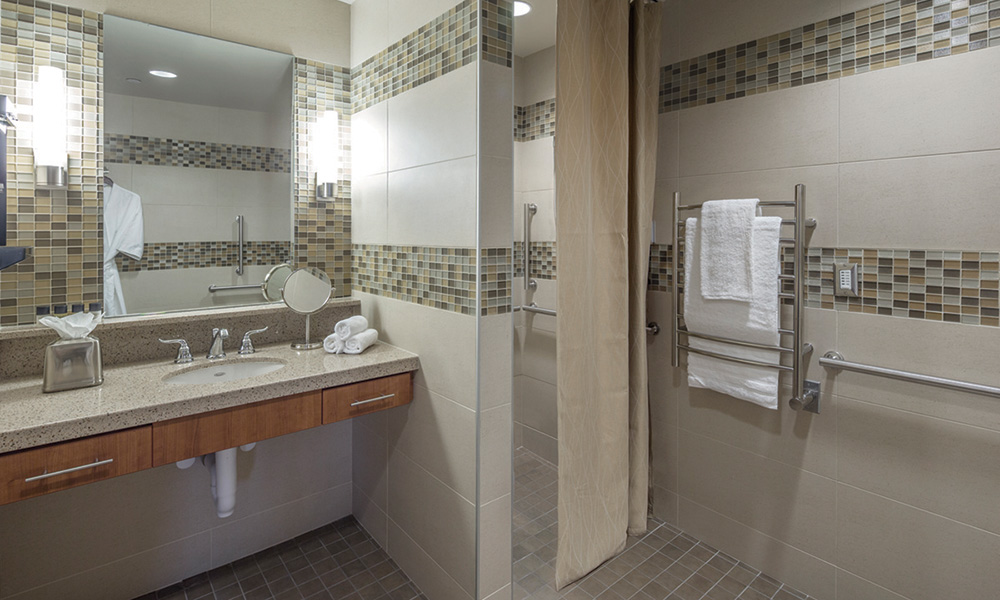 All patient rooms and patient bathrooms at Mainline Health’s Lankenau Concierge Suite, Pennsylvania, are required to have sinks. Switching from regular sinks to low-flow fixtures in all patient rooms can drastically reduce a hospital’s water usage.
◀ ▶

The world was shocked to learn that Cape Town, South Africa’s second largest city, was forced to reconcile with the fact that its water supply wasn’t a lifetime guarantee. In January 2018, the mayor of Cape Town, Patricia de Lille, announced that “Day Zero” would occur in April of that year.

Day Zero was a term used to describe the crisis at hand when the dams that feed the city its water supply would dry up and all city-supplied water would cease to exist. The city asked residents to drastically cut back on their water usage, warning they might be forced to wait in lines for water rations if trends continued.

Sink faucets were turned off and hand sanitizer dispensers were installed in bathrooms, wealthy residents drilled boreholes in their land to access ground water, lawn watering was banned, agriculture irrigation was severely restricted and grocery store bottled water supplies were raided as the city requested residents to only use 13 gallons of water per person per day. In comparison, the average U.S. citizen uses anywhere from 80 to 250 gallons of water per day.

The city was able to cut back enough to postpone Cape Town’s Day Zero event. Since drought season is over for the year, water usage can never go back to the levels of the past. Coming to the brink of shutting off the city’s water supply has Cape Town professionals united in their effort to change. Many U.S. cities, and subsequently hospitals, will be faced with these same struggles in the near future.

Historically, water has been a cheap resource, costing less than a penny per gallon. As energy codes get stricter, hospitals are conserving more water. Water utility rates in California and Washington are rising as much as seven percent annually. The more utility costs rise, the higher efficiency fixtures and equipment will be. It is a hospital’s job to keep people healthy and, ultimately, the way to do that is to keep our environment healthy. The following is what new and existing hospitals can proactively do to conserve water.

Step 1: Communicate & include staff and patients in efforts

The first step for existing hospitals wishing to conserve water is to include and inform hospital staff and patients of their efforts. Of course, extreme efforts cannot be taken since hospitals cannot function without a large water supply. However, by requesting patients and staff to turn off faucets when not in use makes it known that the hospital is striving to use less water and, ultimately, save money.

Although patients and staff may feel inconvenienced at times, the accumulated savings could be spent on hospital programs or improvements, making the hassle well worth it.

Next, existing facilities can start accumulating their water usage history. If energy commissioning programs are in use, hospitals can pull data from the past few years and make edits or updates to the systems as necessary. As part of this intensive systems edit, all water meters should be checked and sub-meters installed, if not already in use. Hospitals should set goals based on this baseline data.

While it may seem obvious, regular maintenance to mechanical and plumbing systems should be done and all leaks and inefficiencies repaired. Irrigation systems are also a huge consumer of water.

If detected early enough, inefficiencies can be corrected and potential damages to surrounding equipment and finishes prevented. Native plants can be used in landscaping, so less water will be necessary. Finally, a quick study into the amount of irrigation recommended in certain areas can be found based on recent rainfall. Rain sensors are a no-fuss way to prevent unnecessary watering.

Though plumbing systems and fixtures cannot be updated instantly, as a campus expands and is renovated, efficient fixtures should be requested and new systems put into place. As budget money and donor funds become available, hospitals can strategically install elements of a more efficient system until it’s complete.

Installing new low-flow faucets, updated shower heads, dual-flush toilets and pint urinals in all bathrooms, both private and public, will lead to significant savings on a new hospital addition or new tower. These new fixtures, combined with Energy Star-certified appliances, could reduce water usage from the baseline by 50 percent.

The same concept applies to outdated medical equipment and tools. If they require intense amounts of water to sterilize or use, they can likely be replaced with something innovative and less impactful on the water supply.

On a smaller scale, appliances can be purchased that use economical water cycles. Ice machines and refrigerators are constantly being updated to incorporate air cooled or closed loop systems, which waste less water. Medical vacuum pumps are being developed that use no water at all.

New healthcare facilities have the most potential for savings. Many of the same strategies come into play, such as more efficient medical and systems equipment, native landscaping, irrigation, maintenance, metering and commissioning, but they can be taken to the next level.

Xeriscaping, or landscaping that requires no irrigation besides rain, for instance, can be planned early so that only native plants are installed and irrigation water saved. Drip irrigation is a step away from xeriscaping, but still greatly reduces water use, compared to traditional irrigation systems. The water supply is used to flush toilets and water plants from a rain collection system, or greywater system.

Greywater systems utilize gently used water from sinks, showers and washing machines for non-potable applications. Potable drinking water is often used for these tasks, which is quite wasteful. Permeable paving, in parking lots and along sidewalks, will also cut down on the intended sewer drainage use on the hospital campus.

There are many new equipment technologies that can be taken advantage of during the early stages of hospital design. Early planning and coordination can allow for a new, optimized central utility plant. CUPs are typically comprised of cooling towers, generators, chillers and boilers. Cooling towers, chillers and boilers are all giant consumers of water and have great potential to use less water than typically permitted by the energy codes.

A new or upgraded CUP is the quickest way to save water and energy costs in the long term, despite higher short-term costs. New utility plants range greatly in cost, depending on the size of the campus. An 80,000-square-foot CUP, for instance, might cost around $75 million, but could generate $2 million per year in energy savings.

While Cape Town’s recent experiences were eye-opening, they have taught us a great deal about how much water is taken for granted. As one of the industry’s biggest consumers of water and energy, hospitals will play a huge role in how to evolve the use of this precious resource. If we proactively plan for greater efficiencies now, hospitals and surrounding communities can push back our own Day Zero by decades or even centuries.