Tushar Gupta, AIA, design principal with EYP Architecture and Engineering, has been promoted to managing principal of the firm’s Houston, Texas office. In addition to his design responsibilities, Gupta will strategically leverage EYP’s business development, operations and design teams to optimize performance across all aspects of the local business. Gupta strives to grow the office and will collaborate with local staff to enhance the firm’s presence among Houston health systems, universities, architectural and engineering industry and the community.

Since joining EYP in 2000 as a Tradewell Fellow, Gupta has pursued design excellence at every step of development. Collaborating on complex projects with 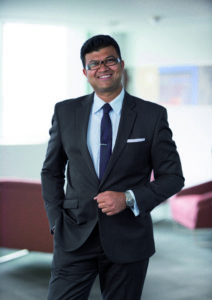 sizable teams, Gupta’s experience with building consensus and meeting client expectations has poised him for this leadership role. His notable projects include Houston Methodist – The Paula & Joseph C. “Rusty” Walter III Tower, Center for Science and Health Professions at University of St. Thomas, Louis and Peaches Owen Heart Hospital, Stamford Hospital, Jersey Shore University Medical Center, North Carolina Heart and Vascular Hospital and UCHealth Longs Peak Hospital. His projects have been honored for excellence by the European Healthcare Design Awards, International Academy of Design and Health and the Society of Critical Care Medicine, among others.

Gupta was promoted to EYP firm principal in 2006. He is actively involved with the The American Institute of Architects Academy of Architecture for Health and is committed to developing the next generation of architects. He serves as 2018 AIA AAH president elect and received his Master of Architecture from Texas A&M University.