In many places across the U.S., hospitals and healthcare systems are the largest employers in their regions. But are they true engines of economic development for their communities? Not always. Their limited influence is often the consequence of outdated planning strategies and tax laws. Now a bottom-up demand is creating a market for a more responsive and proactive model of healthcare delivery, sparking a revolution that will directly impact the planning and land use strategies used on major hospital campuses. Let’s look at how this situation has developed, and outline some solutions to address it.

In rural and suburban areas, hospitals tend to build on low-density tracts where land is relatively cheap and additional land is available for expansion. Infrastructure has to be extended to these remote sites that lack adjacent housing, amenities or public transit, and staff has to commute to work rather than live nearby. New or expanded hospitals often require significant public support to open their doors. In denser urban areas, hospitals can quickly become landlocked as they grow. This forces them to a) buy and rezone adjacent properties—which can be unpopular, costly and time-consuming—or b) move some departments offsite into leased space, which is costly for the institution and inconvenient for staff.

Beyond these land-planning challenges, we must also remember that most community and regional hospitals are nonprofits, which means they don’t pay federal income tax or state and local property taxes in return for providing a community benefit. However, definitions of “community benefit” and “charitable services” vary greatly from one municipality to the next. In recent years, we have seen communities across the country challenge hospitals’ tax-free status. In 2016, 12 municipalities in New Jersey filed tax appeals against the hospitals in their communities, leading the judge in the case to write: “Non-profit hospitals have changed significantly, from their early origins as charitable alms houses… Today they are sophisticated centers of medical care, and in some cases, education, providing a litany of medical services regardless of a patient’s ability to pay.”

In places where the economy is strong, this arrangement may have little impact on the community’s economic health. However, when these hospitals are located in disenfranchised neighborhoods that lack the economic base to absorb the lost revenue, the new hospital—which might also house a state-of-the-art obstetrics wing that brings business from across several states—provides little benefit to its surrounding community.

As new practices become more prevalent, we should rethink hospitals’ traditional patterns of growth and expansion—and, ultimately, how they can both promote health and strengthen their communities. Here are four strategies for creating a win-win scenario.

Over the past decade, the growth of inpatient care has dropped by 19.5 percent while outpatient care has risen by 47.4 percent. This reflects the movement away from episodic care to consumer-oriented continuous care and a focus on overall well-being. Hospitals will no longer be measured by the number of patients they can service, but rather by the breadth and variety of services available to the patient. As hospitals look beyond the patient bed as the fundamental building block of expansion, they free up precious real estate on landlocked campuses. The land might be used for a new building that consolidates off-campus departments or, as we are seeing at Maryland’s Shady Grove Adventist Hospital, made available to private development that serves the community. 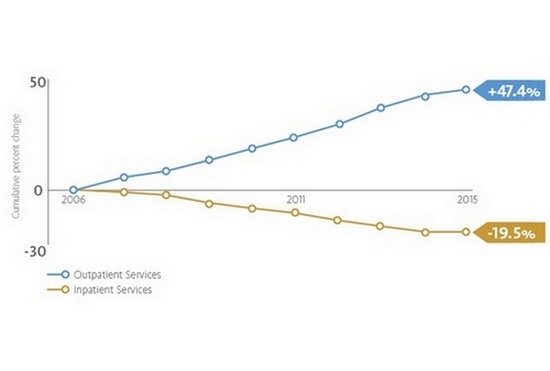 2. Promote a mix of supporting uses

Whether or not a hospital chooses to develop its own property, it can still influence the growth of private taxable uses in the community. This can be accomplished in many ways, such as offering incentives to staff that walk to work (promoting wellness and creating demand for nearby housing and amenities) or by strategically locating new facilities in or near the neighborhood. While working on a neighborhood plan for Southwest Baltimore, we collaborated with the University of Maryland Medical Center. They had taken a critical step in the community’s revitalization by crossing MLK Blvd., a historic socio-economic division between downtown and the southwest neighborhoods, to build a state-of-the-art proton cancer treatment facility.  The university partnered with a private developer to build high-rise housing and a hotel next to the facility, foreseeing the neighborhood’s role as supporting the “medical tourism” created by the proton facility. This investment showed certainty in a disenfranchised neighborhood, and sparked rehabilitation of the existing housing stock. With the shift toward continuous care, people with specific needs will want to live closer to healthcare centers for easy access to weekly treatments or on-demand services.

Hospitals must engage their communities when it comes to plans for growth and development. Likewise, communities must engage hospitals—their anchor institutions—in the decisions that shape the neighborhood. In the former case, a hospital representative might be encouraged to join the board of a community organization or become a member of a local planning commission. Having community members attend planning meetings and play an active role in the public process completes this two-way street. It is critical to build trust and collaboration with adjacent neighborhoods and find ways of providing true community benefit.

At the other end of West Baltimore Street, we engaged Bon Secours Hospital, part of an international Catholic charity that has been active in the Southwest Neighborhoods for well over a century. Bon Secours has long provided housing, education and social services beyond basic medical care. Recently, Bon Secours established “a Community Investment Program where a portion of unrestricted assets (investment funds) are made available through loans to community projects… The monies are made available through non-profit financial institutions to borrowers at low, or below market, rates to foster improvements in the overall health of communities.” In the case of hospitals that develop property, they may choose to hold ground leases on the property and dedicate those revenue streams back into the community in a similar way. 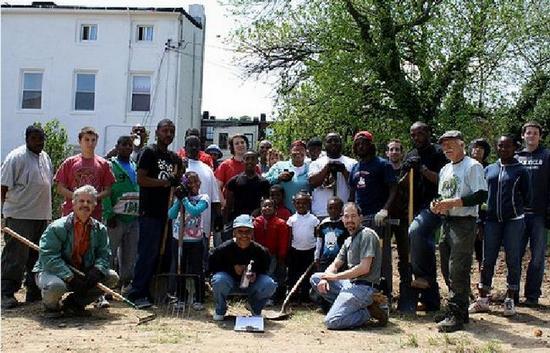 A tried-and-true key to success: plan ahead. In our experience, hospitals do not always expand according to plan. Instead, expansion comes when opportunity arises—either when a donor makes funding available, or when a temporary solution becomes untenable, such as leasing off-campus space. By contrast, when hospitals create a 10- or 20-year strategic plan, it becomes possible to evaluate specific sites within a larger framework and a set of defined goals. Such a framework might address shifting service models, expansion or contraction, lease timelines, costs of land development, access to transit and, of course, impact on the community. Incoming hospitals are in positions of power to dramatically shape neighborhoods, and it is deeply important for them to outline in advance how they will function as good neighbors. Once a clear path is charted for these and other themes, determining the highest and best use of a property becomes much easier.

Hospitals can no longer afford to operate as “cruise ships” on the horizon, providing everything on-campus. They must develop symbiotic relationships with their surrounding neighborhoods or regions. By doing so, there is tremendous opportunity for hospitals to remain competitive while becoming true engines for community and economic development.