Based in Columbus, Ohio, Levitt is a key leader of CannonDesgin’s business development team, directing strategic efforts for pediatrics throughout the world. His 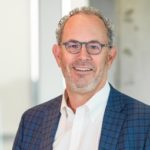 39-year career has included top-level positions at several of the nation’s leading architecture firms, steering them to record growth and expansion.

Levitt is an alumnus of the University of Cincinnati. In addition to his work with HCI, he supports industry organizations that include the American College of Healthcare Executives and the American Institute of Architects. A SMPS fellow and 2006 Marketing Achievement Award recipient, he has served the organization at local chapter and national levels culminating in his role as national president. Passionate about giving back to the community, Levitt has previously served on the boards of the Ronald McDonald House Charities, BalletMet and Columbus Zoological Gardens. He serves as an ambassador for Nationwide Children’s Hospital.