Michelle Acosta and Stephen Parker, both with SmithGroupJJR, have received the American Institute of Architects 2018 Young Architects Award. The AIA Young Architects Award recognizes professionals who have been licensed 10 years or fewer, regardless of their age. It honors those who have shown exceptional leadership and made significant contributions to the profession early in their careers. 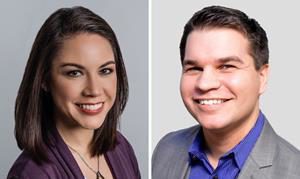 Michelle Acosta, AIA, EDAC, is a healthcare project manager at SmithGroupJJR’s Phoenix, Arizona office. She joined the firm in 2016 and is serving as the project manager for Phoenix’s Salt River Pima Maricopa Indian Community Northeast Ambulatory Care Clinic and the campus master plan for the University Medical Center of Southern Nevada.

Acosta has been an been active and dedicated member of the American Institute of Architects since she joined Arizona State University’s student chapter, where she helped grow the chapter from 20 members to more than 100. This was the beginning of more than a decade of significant leadership roles within AIA. After becoming the associate director of AIA Phoenix Metro, she took on the role of regional associate director for AIA Western Mountain Region, where she was honored with the 2008 AIA WMR Directors’ Recognition Award.

In 2014, Acosta relocated to Los Angeles, California and joined AIA Pasadena & Foothill and within the same year was elected the 2016 chapter president, becoming only the sixth female president in its 68-year history. In this role, she increased the diversity of its board of directors and established new ways to attract and mentor younger members. Today, she remains active with AIA, serving as diversity and equity chairperson for AIA Arizona.

Stephen Parker, AIA, NCARB LEED AP BD+C, joined SmithGroupJJR in 2014 and serves as an architect and planner in the firm’s Washington, D.C. office. He is engaged in a wide range of projects for the firm, including the expansion and extensive renovation of Indiana University’s Assembly Hall and a next-generation hospital at Sharp Chula Vista Medical Center in San Diego, California. He also collaborates on multiple projects with the U.S. Department of Veteran Affairs that are contributing to the creation of improved healthcare environments for veterans.

Parker has been involved with the AIA at multiple levels. As a student and architectural apprentice, he served on the AIA Greenville (South Carolina) executive committee and went on to serve as a member of the executive board of AIA South Carolina. He became an early champion for the National Design Services Act, legislation intended to allow design professionals to pay off their student debt through community design service.