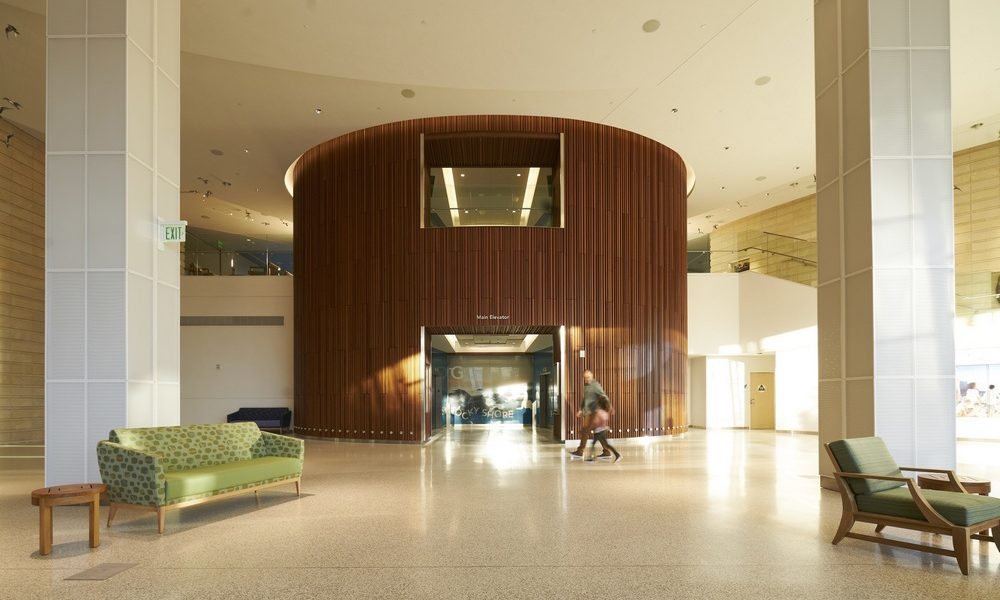 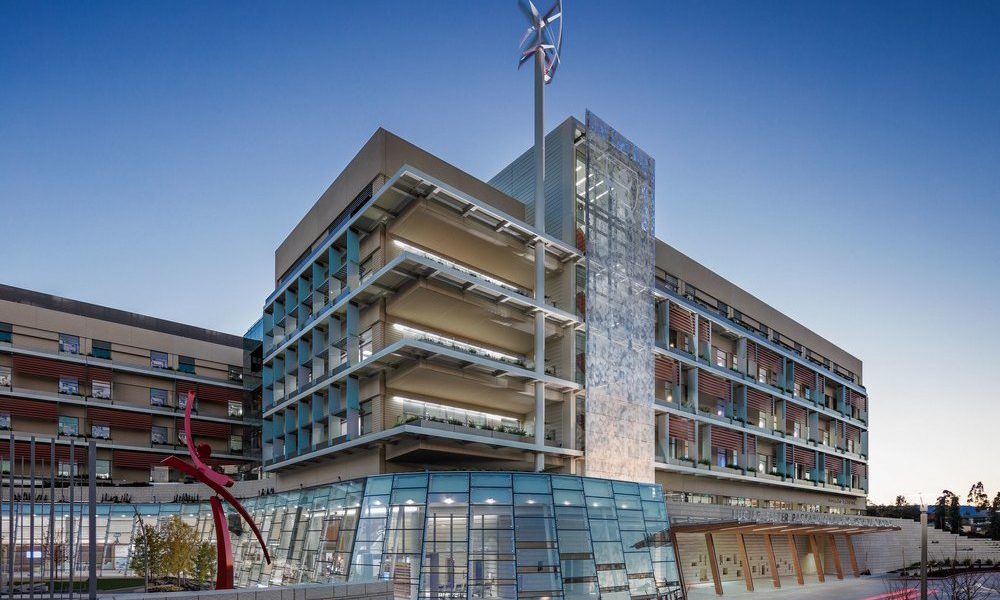 The new main building at Lucile Packard Children’s Hospital Stanford, located in Palo Alto, California, has been awarded LEED Platinum certification by the U.S. Green Building Council. The hospital, which opened in December 2017, is one of five new hospitals — and the second children’s hospital — in the world to earn the USGBC’s Platinum designation.

The 521,000-square-foot building and 3.5 acres of gardens and green space were designed, planned and built by design architects Perkins+Will, executive architects and medical planners HGA, engineers at Mazzetti and general contractor DPR Construction. The teams worked closely with patients, families and hospital faculty and staff to create the facility, which is anchored by the core themes of providing a family centered approach to healthcare and meeting the highest standards for sustainability.

Reducing energy and water use

A distinct feature of the building’s façade are the horizontal orange slats, called louvers, positioned like awnings across the top of each window. These are part of an external shading system that minimizes direct sunlight penetration into the building, which helps reduce solar gain — the increase in temperature caused by the sun. It also cuts down on the need for air conditioning, which requires both energy and water. Minimizing direct sunlight penetration into the building is also essential for the displacement ventilation system to work effectively. Hence, the design of the exterior walls directly supports the hospital’s ventilation system selection and its energy-efficiency goals.

Additionally, in a departure from traditional facilities, the hospital’s data center is positioned on the roof rather than in the basement, a move that dramatically reduces the fan energy required to keep it cool and allows it to utilize cool nighttime outdoor air rather than air-conditioned air for much of the year.

Maintaining a safe environment for children and their families requires an abundance of clean water. With conservation-driven water systems implemented across the hospital campus, Packard Children’s is an industry leader in maintaining sustainable complex medical systems and equipment as well as essential services like heating and cooling, laundry, sterilization, sanitation and food service.

The hospital’s water-conserving, energy-efficient equipment such as dishwashers and sterilizers are projected to use about 80 percent less water than their standard counterparts. Water-cooled pumps and air compressors are being eliminated to reduce water usage, and on-demand sinks and ultra-low-flow bathroom fixtures are expected to save 2.5 million gallons of water per year.

Packard Children’s is one of the early pilot facilities for LEED credits related to nature connectivity. The new hospital’s grounds add 3.5 acres of gardens and green space to the pediatric campus. These gardens offer distinct places of respite to both families and staff, including outdoor overlooks on every nursing unit, as well as a series of garden spaces adjacent to the lobby, on the main concourse floor and near the staff entrance. In addition, outdoor planters are integrated in the solar-shading system, providing an immediate connection to nature for every patient room and at the centralized family lounges on each floor.

The hospital’s drought-tolerant and water-efficient landscaping is irrigated with non-potable water only, which is collected in two 55,000 gallon underground cisterns. The cistern system filters, stores and reuses water collected from rainfall, mechanical equipment condensate and even hemodialysis.

According to Perkins+Will and DPR officials, more than 28 percent of the hospital’s building materials, including carpet, tile, steel and concrete, contain recycled content, and more than 26 percent of those materials were extracted or manufactured within 500 miles of Palo Alto. The centerpiece of the new hospital’s lobby is an elevator bank that was designed to look like the trunk of a great redwood tree. It is clad in reclaimed redwood salvaged from the 200-foot-tall Moffett Hangar One, an iconic 1930’s naval hangar in nearby Mountain View, California that had long been a landmark in Silicon Valley before being deconstructed in 2012.