NEW YORK, N.Y. – The Dodge Momentum Index increased 0.5 percent in February to 146.9 (2000=100) from the revised January reading of 146.2. The momentum index is a monthly measure of the first (or initial) report for nonresidential building projects in planning, which have been shown to lead construction spending for nonresidential buildings by a full year. The move higher in February was the result of an 8.2 percent increase in the institutional component, while the commercial component contracted 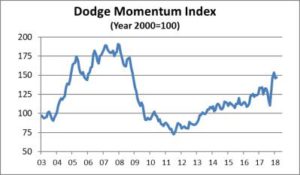 4.8 percent. The commercial component has declined for two consecutive months and, while this should not lead to an outright decline in construction activity, it is an additional sign that commercial building construction growth could ease in 2018 in response to rising vacancy rates for offices and warehouses. On the other hand, institutional building construction continues to feed off the massive number of state and local bonds issued for schools and other institutional buildings over the past few election cycles.

In February, 16 projects each with a value of $100 million or more entered planning. For the institutional sector, the leading projects were the $450-million MSG Sphere Arena in Las Vegas, Nevada and the $412-million St. Jude’s Children’s Hospital Research Center in Memphis, Tennessee. The leading commercial projects were the $280-million first phase of the Sentinel Data Center in Sterling, Virginia and a $150-million mixed-use project in San Jose, California.