Jim Henry, AIA, has been named health director responsible for the U.S. West region healthcare architecture practice for HDR. This move signals a transition for Henry from the global firm’s design team to its health leadership team.

Henry has most recently served as design director for the Health sector, where he played a pivotal role in bringing to life many of HDR’s most noteworthy 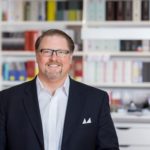 projects. He has worked on projects such as The Pavilion for the University of Pennsylvania Medical Center, Cleveland Clinic Abu Dhabi and The Ohio State University’s Wexner Medical Center. Henry also was the co-design lead for New Parkland Hospital, the largest county hospital in the U.S.; design director for Lackland Ambulatory Care Center, the largest of its kind in the Department of Defense; worked with Kaiser Permanente on the Reimagining Ambulatory Design project and many other healthcare, education, science, technology and civic projects.

Henry’s extensive portfolio brings nearly 20 years of architectural experience reflecting his commitment to designing physical environments that enrich lives and promote the humanistic principles he strongly values. In 2015, he received a Young Architect Award from the AIA.