The most recent Commercial Buildings Energy Consumption Survey collected new information about lighting control technologies and strategies in the United States in 2012. Compared with other investments in energy efficiency—such as upgrading heating, ventilation, and air-conditioning systems or replacing insulation—lighting controls are often relatively easy, accessible and affordable changes. A new EIA report, Trends in Lighting in Commercial Buildings, details these strategies and provides information about lighting technologies in commercial buildings, including healthcare facilities. 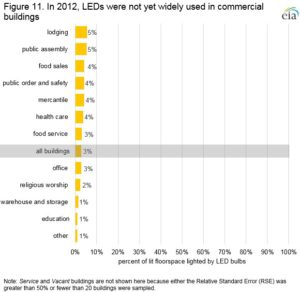 Lighting control technologies provide the appropriate level and type of lighting to a building and save on electricity costs. The use of these systems is more common in large, lit commercial buildings with at least 50,000 square feet of floorspace.

A third set of strategies saves energy by adjusting the amount of light produced by bulbs to give just enough light to a space for the conditions or the tasks performed there. Multi-level lighting or dimming adjusts lighting power through continuous dimming, stepped dimming or stepped switching. These devices were used in only 7 percent of all lit buildings but in 23 percent of large lit buildings in 2015.

Daylight harvesting uses a lighting control and shade system to automatically dim light fixtures when natural light is available or adjusts shades so that natural light and artificial light combine to provide the desired level of lighting. Daylight harvesting was used in only 2 percent of all lit buildings but in 9 percent of large lit buildings. High-end trimming or light-level tuning sets the maximum level of lighting to less than 100 percent. Light-level tuning sets the level even lower if a room or space needs less light. These strategies were fairly uncommon, used in only 1 percent of both groups of buildings. 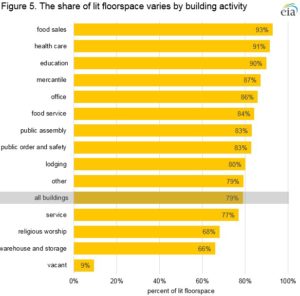 Lighting and principal building activity
Different activities demand different amounts of light within a building. The average amount of lit floorspace for all buildings is 79 percent, but three building types have light in at least 90 percent of the floorspace – food sales, healthcare and education.

The new report also provides data on the use of different bulb types. Since 1995, CBECS has used similar questions to capture lighting use in buildings, allowing for comparisons across survey years for five bulb types: standard fluorescent, compact fluorescent, incandescent, high-intensity discharge and halogen.

Breakdown of bulb use
Standard fluorescent
Standard fluorescent bulbs provide light to the majority of lit floorspace across all building activities. Though this lighting type has been common in commercial buildings for decades, the technology continues to evolve. Tubes for standard fluorescents have become increasingly narrow in diameter, moving from T-12 lamps to T-8 and T-5, meaning that they can be made with higher quality materials, resulting in a more efficient bulb.

There was a statistically significant decrease in the share of lit floorspace using incandescent lamps in seven building categories between 2003 and 2012: education, lodging, food service, religious worship, retail (other than mall), healthcare and office.

Read the full report at eia.gov.