The Turner project team managing the expansion of emergency and intensive care services at Cleveland Clinic in Miami, Florida, recently celebrated topping out the steel for the five-story facility – and they’re looking ahead to the next milestone. 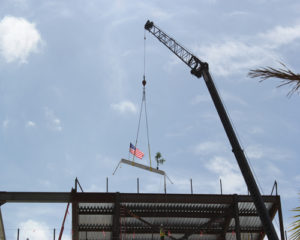 an engineer on the job. More than 200 people gathered to celebrate topping out the tower piece of the project.

The project team is realizing multiple phases of construction simultaneously, Hussey explained. “We’re working on the bed tower, a central utility plant, the utility corridor in front of the existing hospital facilities and extensive work inside the hospital broken down into nine phases of renovations, as well as adding two surface parking lots and performing other site work,” he said. Given that diverse scope of work, as the hospital’s leaders recognized in their remarks at the topping out, one of the project’s greatest challenges is minimizing the disruptive impact of work on the patients and on hospital operations.

According to Hussey, prefabrication is a key countermeasure the team has taken to reduce these effects. “We prefabricated the steel vierendeel truss sections for the utility corridor on site, but well out of the way of hospital operations,” he explained. “We are also performing modularization and prefabrication of other building elements for the same reason – including MEP corridor racks being installed now, and bathroom pods which will be fabricated, delivered and installed over the next couple of months.”

With building dry-in as the next major milestone, the project team is looking forward to exterior wall installation, which is set to begin this month. The Bed Tower project is scheduled for completion in summer 2018.