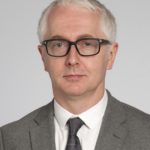 In this newly created role, Connell will be responsible for the creation, strategic alignment and execution of architecture and other design initiatives to create serene, restorative environments consistent with Cleveland Clinic.

As a partner at Foster + Partners, Connell was involved in the creation of the Cleveland Clinic Master Plan, which was designed to provide a welcoming campus-like environment for patients and serve as a road map for future campus development. Connell has also been involved in the design of Cleveland Clinic’s Health Education Campus, which will include a 27,000-square-foot atrium and four stories of learning spaces that encourage interaction among the medical, dental, nursing and allied health students enrolled there.

Prior to beginning his career at Fosters + Partners in 1988, Connell graduated from Glasgow School of Art and the University of Glasgow in Scotland, United Kingdom. In his time at Foster + Partners, Connell has worked on more than 100 projects around the world, with his completed buildings receiving more than 40 awards. His involvement has ranged from architecture, industrial and interior design to infrastructure and master planning.