ST. LOUIS, Mo. – Bade Roofing Company reported zero injuries on a challenging project that required its workers to scale a 1,200-foot-long, 13-foot-wide elevated pedestrian skywalk through one of the busiest medical campuses in St. Louis, Missouri.

The East-West Connector project on the BJC HealthCare/Washington University Medical Center campus was completed in March 2017, following 8 ½ months of 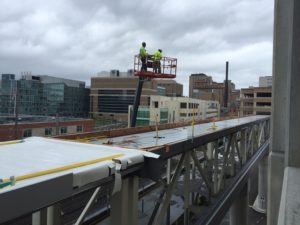 construction. The massive concrete, glass and steel structure reaches heights of 40 feet above street level and travels nearly a quarter of a mile to connect four parking garages and various buildings throughout the busy campus.

Bade crews installed a tapered roof system – a Firestone induction-welded white TPO membrane with R20 insulation and a ½-inch cover board – over the entire length of the pedestrian bridge. The roofing project was broken into seven areas and each area had to be installed separately and not in order, so this meant Bade’s workers had to mobilize and demobilize frequently and splice newly installed roof areas to ones installed sometimes months before.

A crew of three to four workers took three months to complete the complex roofing project. In a single, 15-hour day, two workers roofed a 120-foot span of the bridge. Given the logistics and safety concerns, this was an amazing feat, said Bade Roofing CEO David Bade.

Bade crews utilized a lifeline stanchion system, installed every 30 feet along the top of the skywalk. The stanchions had to be clamped to the structural I-beams, which required cutting through 18 gauge metal decking to get to them.

“Safety on the project had to be handled much like a road bridge,” said Bade. “It made roofing very slow and tedious, but safety was a major concern and the project was completed with no incidents.”

The massive connector is constructed of 14 concrete piers (2,500 cubic yards of total concrete), more than 500 sections of glass panels and pre-fabricated steel truss sections weighing a total of 380 tons.

KAI Design & Build, in a joint venture with Paric Corporation, served as the architect and general contractor on the project.