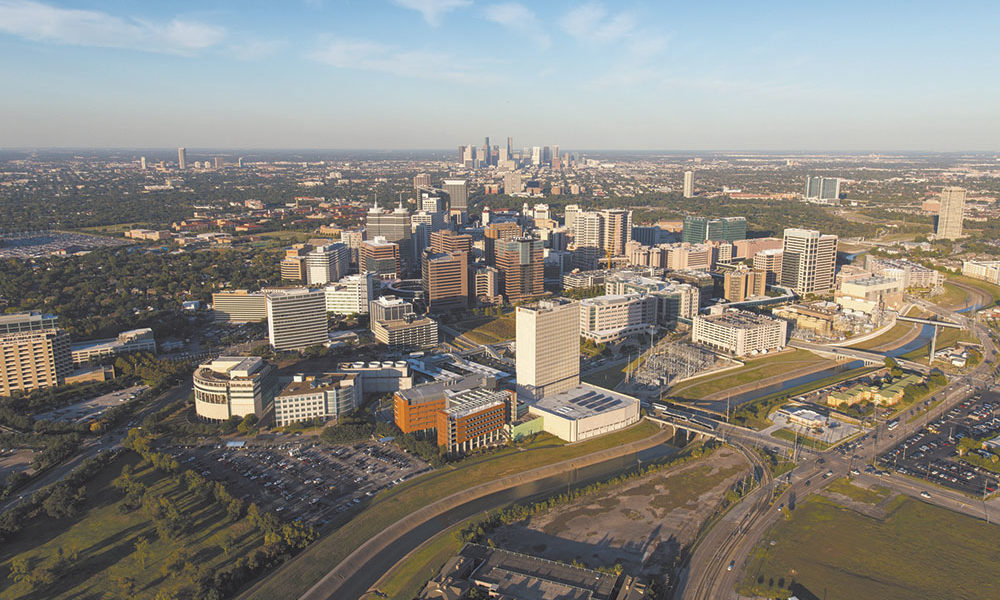 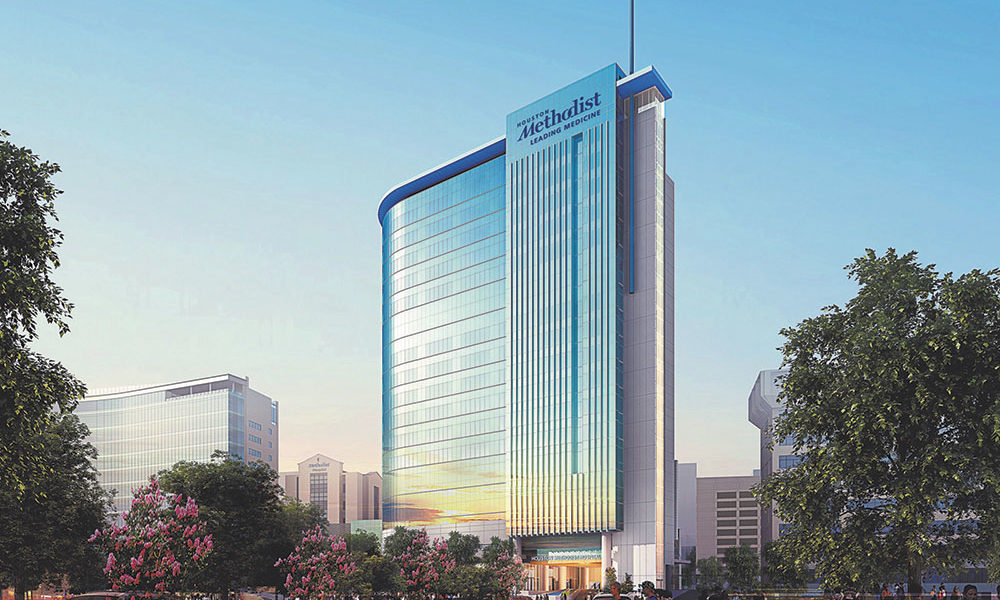 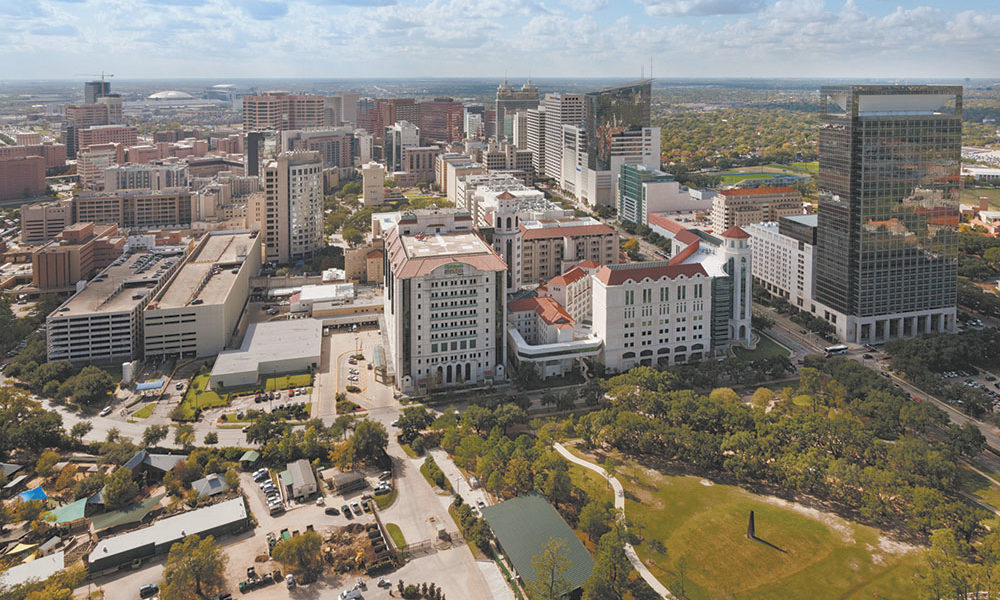 Aerial view of the Texas Medical Center with Memorial Hermann in the foreground. 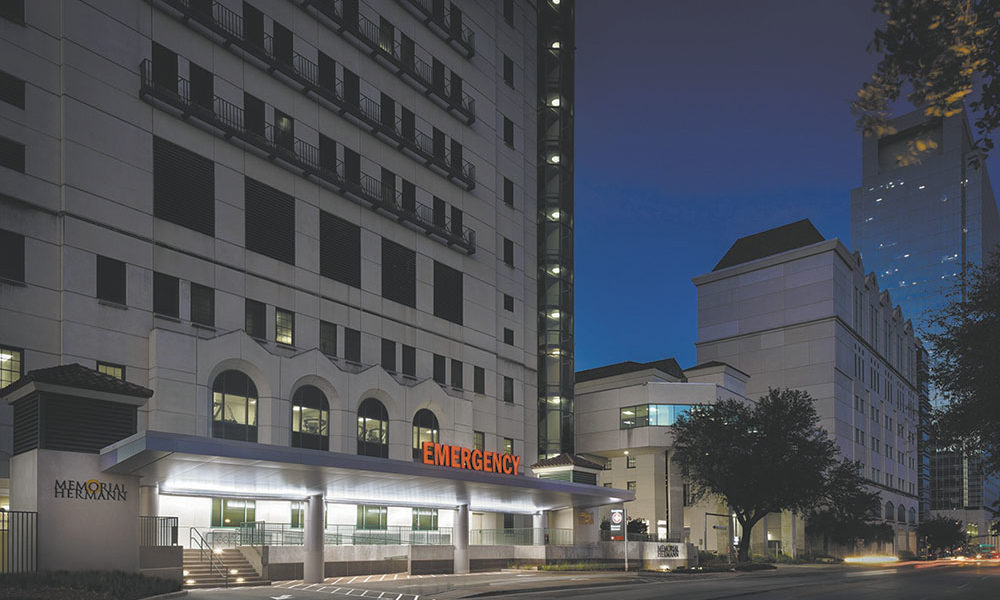 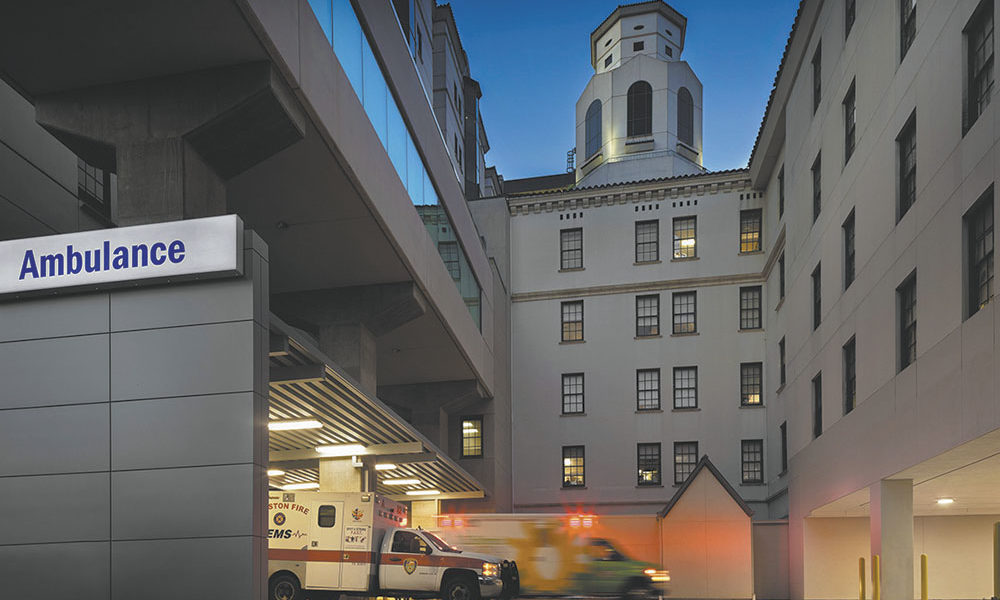 Efficient and ample ambulance and public drop-off zones at Memorial Hermann accommodate 3-4 queuing SUVs, with the ability of a fifth SUV or truck to pass by, as well as accommodating five ambulance unloading bays. The new entrance is now complete in Phase 1 of the expansion. 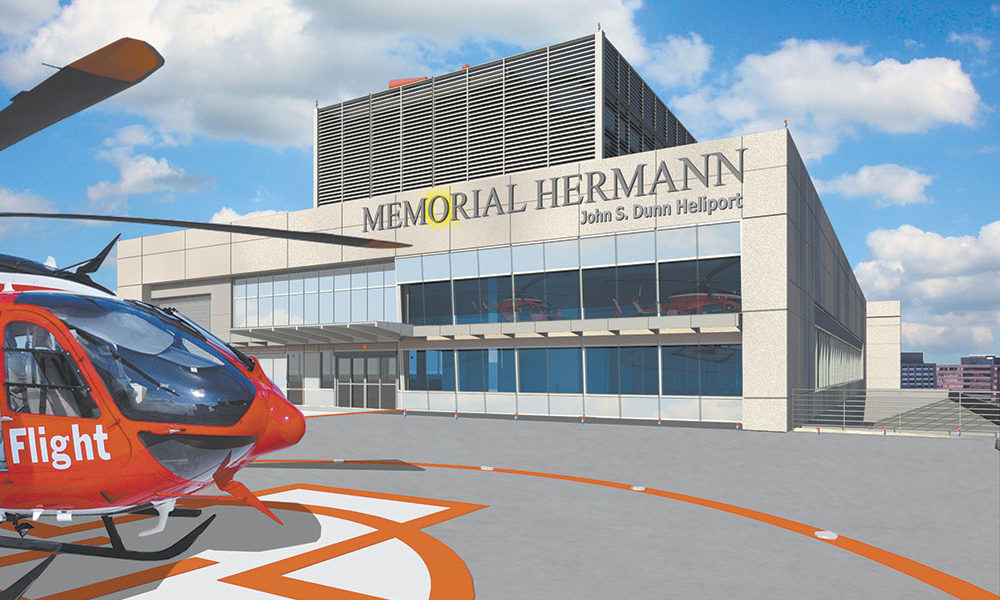 Measuring Up: Methods to Rise up to Challenges, Needs of Urban Healthcare

“Best and brightest” practitioners are drawn to the teaching, research and innovation at academic medical centers. Academic medical centers and teaching hospitals need to be a certain size to satisfy the needs of a robust teaching program. A comprehensive range of medical specialties demands a certain minimum number of patients requiring those special skills to create a meaningful teaching environment. Added together, those specialties and their requisite patient population define a relatively large hospital, above 400 beds, that needs to be in a population center capable of filling those beds.

Moreover, the highest ranked teaching and research hospitals are specialized facilities — cancer centers, cardiac care or pediatric hospitals — not general hospitals. The aggregation of highly specialized capabilities tends to create medical centers, which include academic, research and teaching resources in a variety of settings: specialized and more generalized hospital and research facilities and medical schools that can service a number of patient care institutions.

Houston’s Texas Medical Center, with one of the highest densities of clinical facilities, provides an exceptional example for understanding both the challenges and possibilities that large urban medical centers represent. Established in 1945, the campus includes aging and new facilities on a relatively tight, very urban parcel of land in central Houston. From a facility perspective, this creates its own set of problems, not the least of which is the challenge of renewal and replacement. While the TMC controls its density and development within the boundaries of its campus, like other urban medical centers, the availability of land is constrained.

An aging, existing facility cannot be taken down until the institution can replace that capacity, which requires sufficient land for building. Despite the densities and the difficulties involved, there’s an intellectual critical mass and synergy that makes it worth the effort to expand on the campus.

While the TMC’s major hospitals all have satellite facilities around Houston, the main campus still offers higher levels of care for the most acute and complicated diagnoses. Two replacement and expansion projects at the TMC demonstrate two different approaches to growth and reveal the diverse range of patients served in this busy, urban medical center.

To grow in a measured way that allows an institution to maintain a functioning, aesthetic facility, there is a need for an “empty chair.” To prepare for this expansion, HMH acquired three parcels of land from Texas Woman’s University, The Institute of Religion and Favrot Hall. The TMC worked with the individual entities to come to an agreement, thus creating a new North Campus for Houston Methodist.

Unlike Houston Methodist, Memorial Hermann’s expansion is being built on a constrained site adjacent to the current facilities in order to provide critical linkages to existing infrastructure. One of the most sensitive components of the project involves the emergency department and, most specifically, the Trauma Institute.

If distribution of care is a problem, a far more critical concern is the deeply uneven distribution and capacity of Level 1 trauma care. Houston, the fourth-largest city in the U.S., has two Level 1 trauma centers — Memorial Hermann and Ben Taub Hospital — located adjacent to one another in the TMC. Travel distances and accessibility are a constant problem, improved significantly by operations like Memorial Hermann’s Life Flight system, which tackles the problem of making trauma care available to a larger catchment area.

Although this is not an uncommon problem in most urban centers, it is much more profound in the suburbs and the smaller population centers within any given state or geographic area. Someone once said that “the worst place to be shot is a) in the head and b) in the suburbs. In either case, your chances of survival are greatly reduced.”

Given the seriousness of the issue, it was important that those designing new trauma facilities at Memorial Hermann understood that the hospital and the trauma institute are vital community resources, even more so in emergencies. Working closely with the physicians and staff, the design team developed plans for a major capacity expansion to the existing Level 1 trauma emergency department that provides an improved emergency entrance with connections to all trauma services in the same building, including Life Flight; trauma, ortho and general operating rooms; burn beds with a rehab gym; shock trauma intensive care and the existing children’s hospital.

One of the primary goals of the project was to design to accommodate 2023 projected volumes, which included almost doubling treatment positions (from 42 exam positions to 63 exam positions), with the majority of the growth in the trauma and pediatric treatment areas. With site constraints complicating the expansion, the design team met the space demands with a variety of solutions from creating flexibility by right-sizing different “soft spaces” (e.g., consultation and triage rooms) and placing them strategically for growth to introducing a “right-of-use, not of the ownership” concept for the documentation stations.

The new trauma ED layout maximizes visibility to entrance points and treatment areas, with priority given to the ambulance entrance, Life Flight entrance from the trauma elevator and the major trauma rooms. The racetrack design features 12 major trauma rooms, 6 critical exam rooms, a CT scanner and an orthopedic cast room surrounding an open core of team workstations and support spaces, dedicated workrooms for the research team and a consultation room for families prior to admitting the patient to surgery or a bed floor.

Further underscoring the community resource nature of the trauma institute, the facility is designed to provide flexibility during a disaster scenario/mass casualty event by strategically locating infrastructure into several exam and treatment rooms. Disaster equipment is located on the ground floor, immediately adjacent to the setup site, eliminating the time required for the search and set up of the equipment.

As major population centers continue to grow, the urban medical centers that serve them must continue to provide a broad range of clinical care of the highest quality and serve as an invaluable community resource. Examining new projects, such as Houston Methodist Hospital and Memorial Hermann at the Texas Medical Center, most are prepared for the challenge.