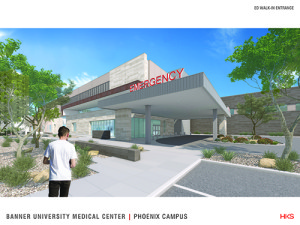 While the emergency department construction will begin in October 2015, the patient tower construction is not yet approved and funded.

The proposed tower would create 312 private rooms in the 16-story tower, eliminating all semi-private patient rooms and making Banner – University Medical Center Phoenix the tallest hospital in Arizona. Three existing buildings on the campus would be demolished to make room for the new tower. Designed with expansion and flexibility in mind, the tower would host the infrastructure to add two additional towers as needed.

The construction of the ED is slated to begin in October 2015 and includes two helipads and an emergency generator building. A 1,100-car parking garage opened on the campus earlier this year. The ED opening is scheduled for December 2019.