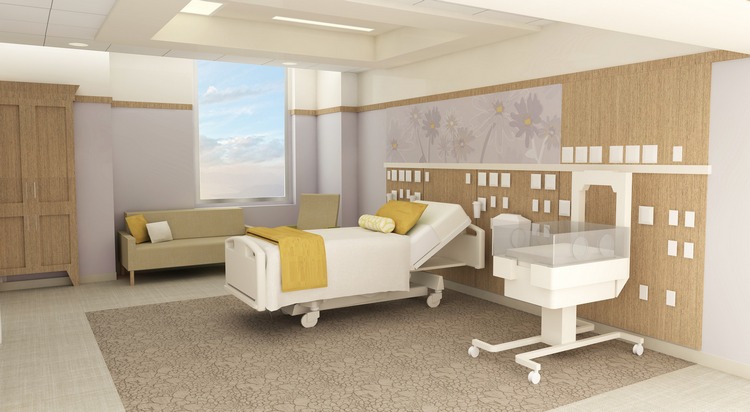 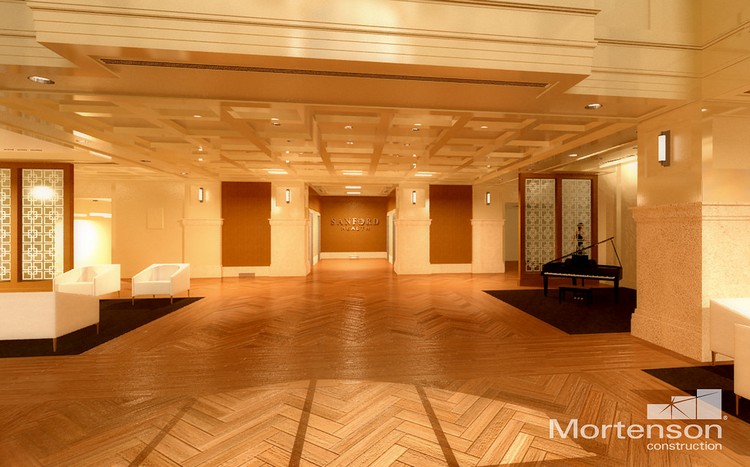 FARGO, N.D. – As construction continues on the structure of the new $494-million Sanford Fargo Medical Center, interior plans are also being developed for the facility’s design. The main lobby area and patient room designs are complete, giving the public a first glimpse of the facility’s interior. Additionally, construction on the elevator shaft nears completion.

The lobby area will cover 4,000 square feet and will vault to 44 feet at its highest point. This multilevel space features public seating on the first floor and surgery waiting areas on the second and third floors featuring views to the lobby below.

Collegiate gothic architectural design–Sanford’s chosen design for all its new builds–typically features a darker interior; however, the south facing lobby area’s gothic arches and dormers include large windows to allow the area to be flooded with natural light.

“Natural light can be such a powerful tool in the healing process and in promoting positive well-being of patients, staff and guests. We optimized the size and placement of the windows in the lobby’s design to allow for maximum light,” said Paul Richard, Sanford Medical Center Fargo president.

The lobby’s aesthetics will feature porcelain tile flooring, carpet and paneled wood on walls. The lobby will house reception services and a grand piano located in the entrance. Adjacent to the main lobby will be a gift shop, chapel and public dining areas. Three separate restaurants will be part of the space, with a large dining area featuring a stone fireplace. Each restaurant will have its own unique theme and feature comfort foods and exhibition cooking.

Labor, delivery and recovery rooms and surgery rooms will feature a family area, complete with sleeper sofa for overnight stays. A linen pass-through system similar to modern-day laundry shoots will be included to minimize patient disruption. Each room has large windows to maximize natural light, and the X-shaped design of the building will allow each room to have an unobstructed view.

The patient rooms are designed with flexibility in mind to adapt to changing services over time if needed. Each patient room, with the exception of the labor, delivery and recovery rooms, will be the same size to allow for smooth adjustments in the future as needed.

“The rooms’ aesthetics and design were each thoughtfully crafted. We chose soothing paint colors in each patient room,” said Richard. “We also wanted to have a unique and local design to the rooms, so native North Dakota flower graphics will be incorporated.”

The medical center’s construction is on budget and on time to be completed in late 2016/early 2017. Due to the building’s size and complexity, services will take several months to fully move in to the new facility. The first patients will be seen in 2017.