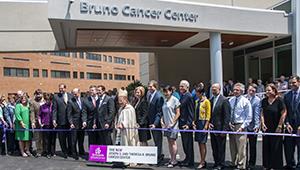 A blessing and ribbon cutting ceremony was held to mark the opening of the New Bruno Cancer Center, which was relocated from its previous location on 10th Avenue South.

Designed with a patient-centered focus, the new Bruno Cancer Center will include features for improved comfort, convenience, easy access and privacy. The facility will also house the newest Varian TrueBeam Stx, offering the latest in radiation technology that enables several radiotherapy treatment options with pinpoint accuracy and precision.

Serving as general contractor, Brasfield & Gorrie partnered with architect Kahn South on this project, which began in June 2013.