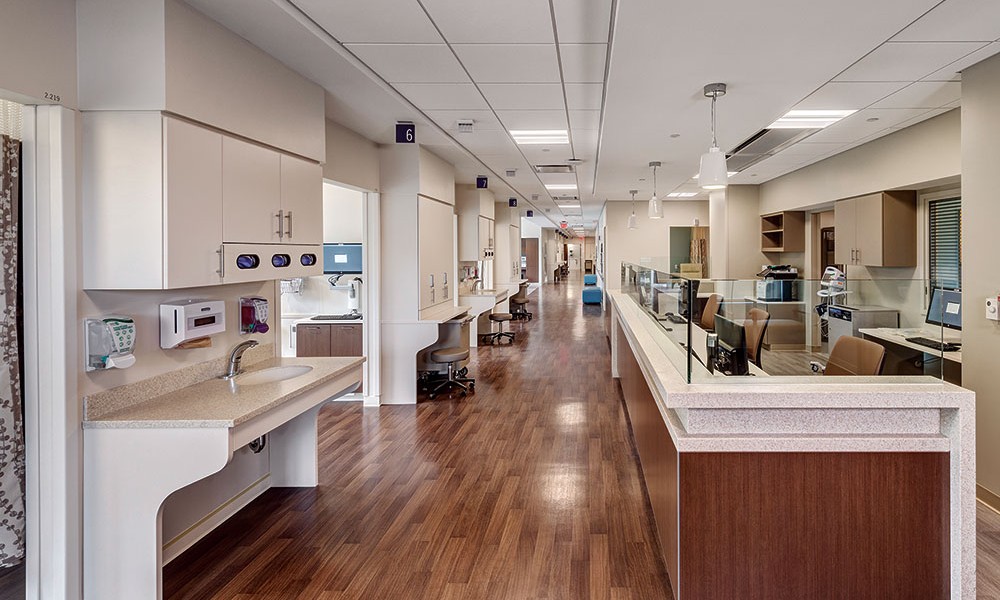 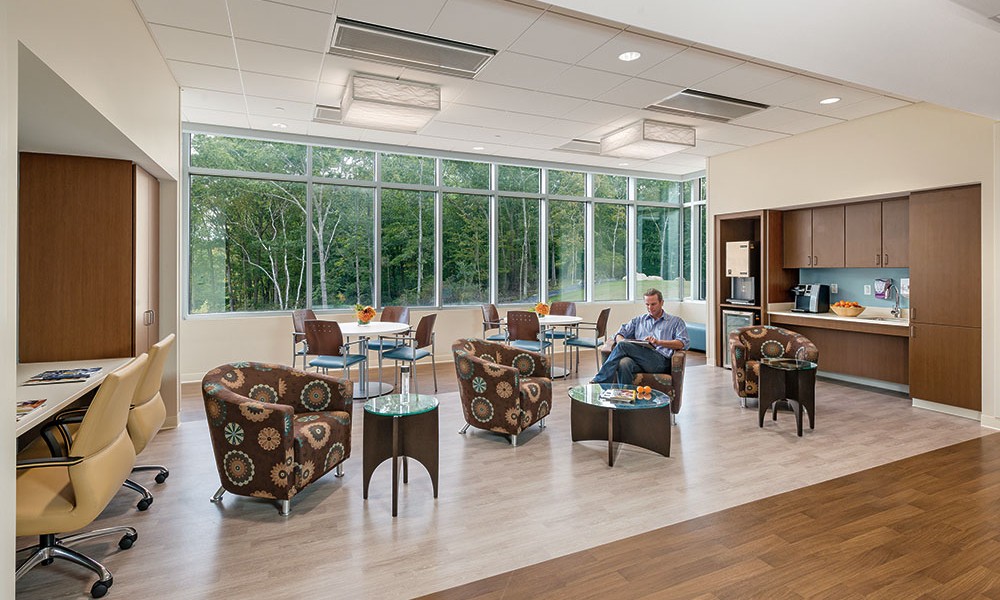 The café and lounge area offers a quiet respite and natural woodland views. 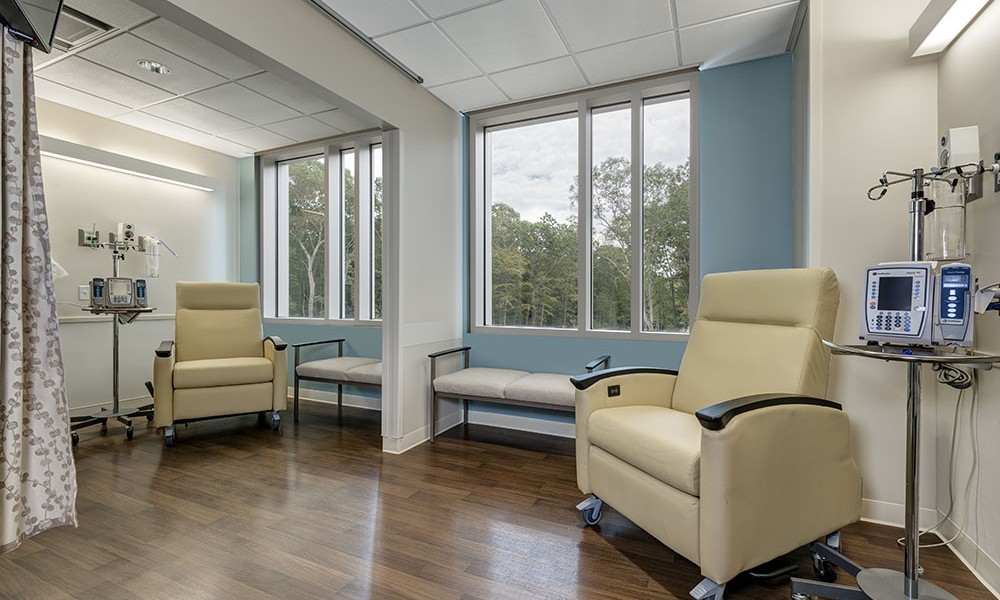 Infusion bays offer a range of privacy options and shared interaction space, all with abundant natural light and outside views. 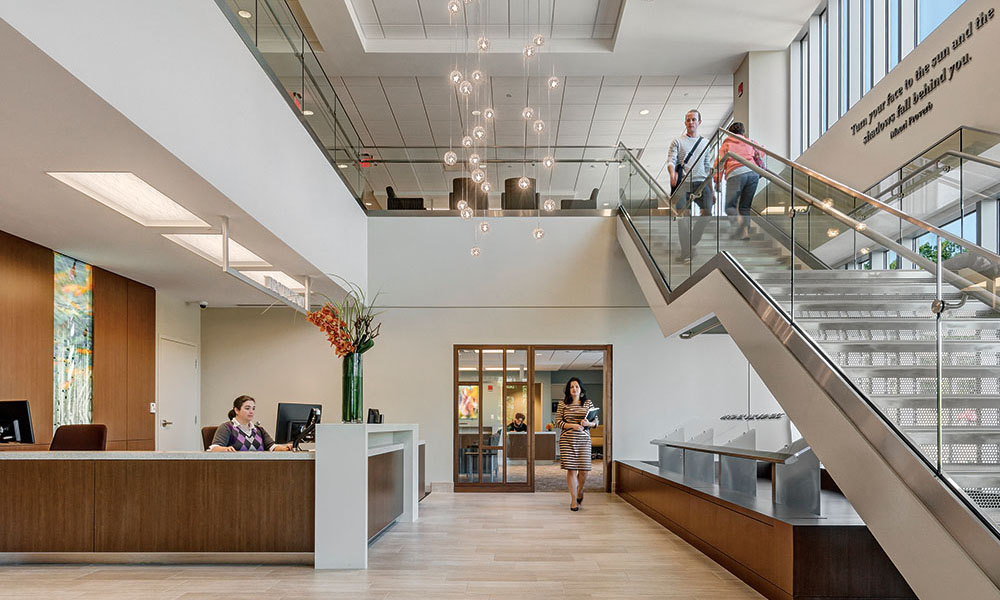 The lobby and reception area connects the main entrance and the stairway to a second floor lobby and forms a link between radiation oncology and medical oncology treatment spaces. 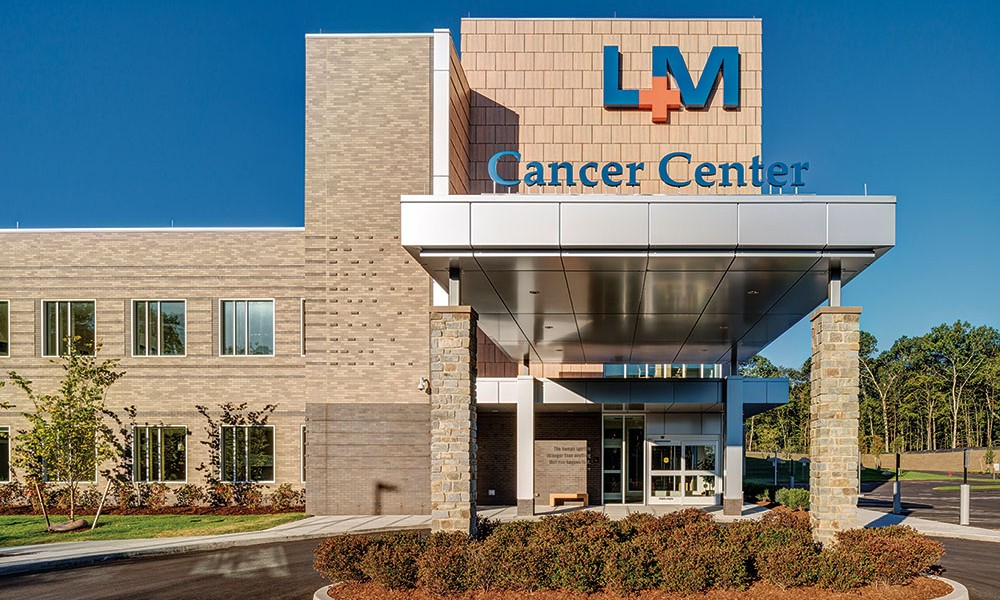 Rallying around shared objectives and the power of collaboration, the team behind the new Lawrence+Memorial Cancer Center benefited from an Integrated Project Delivery process for decision-making and a design informed by hands-on stakeholder advice. The team’s journey offers a roadmap for others considering IPD for future healthcare projects.

The programming, design and construction of the $34.5-million L+M Cancer Center in Waterford, Conn., relied on Lean principles and a unified team commitment to create a world-class cancer care environment.

Opened in October of 2013, the center was developed in affiliation with Dana-Farber Community Cancer Care, internationally renowned for research and clinical excellence. Gynecologic oncology is provided by Women & Infants Hospital of Rhode Island and Yale School of Medicine radiation oncologists provide radiation oncology services. Through these affiliations, cancer patients remain close to the comforts of home — and the healing support of family and friends — while receiving care in a single location.

L+M Hospital staff, well versed in Lean practices and the benefits of process improvement innovation, decided to use IPD to achieve crucial cost, quality and schedule goals and take on a more direct team role in the project.

A single IPD agreement among TRO JB, L+M and Suffolk Construction outlined project objectives and defined how the team members would share risks and rewards. A system for shared savings among project partners was written into the contract, and included the provision that savings would only be dispersed if L+M was satisfied with the final outcome.

Although the contract was important, the team knew early on that the contract was the framework for the process, a starting point for what became a deep commitment to the spirit of the agreement by each individual person striving for project success. The significance of this shared mission and purpose on the project outcome is one of the most significant lessons coming from this collaborative IPD experience.

The basic parameters of the design were established in a three-day production preparation process, or 3P workshop. Sixty participants, including patient advocates, physicians, nurses and staff from every level and discipline, worked side-by-side with TRO JB, Suffolk and L+M’s process improvement team to determine the ideal floorplan, circulation flow and patient care spaces of the new facility.

Breakout session teams worked to evaluate options and develop site organization models, bubble floorplans and string diagrams that were critiqued by the entire group. Consensus on key issues, such as the choice of a two-story versus one-story structure, was based on broad input and on the practical insight of patients and staff.

As the group produced its selected options, TRO JB staff worked each night to take the diagrammatic information and produce 3-D plans and images for review. By the end of the third day, a working schematic plan became the basis of the design team’s ongoing work.

The plans produced from the workshop became the first building information modeling files and were taken through to construction in the virtual models. Lessons learned from this 3P event include confirming the integrity and usefulness of an ambitious stakeholder collaboration. By capturing such a comprehensive amount of input early, the need to make changes downstream or implementing value engineering was essentially eliminated.

“We find ourselves going back to the concepts and consensus produced that weekend even now, three years later,” said Brenda Bullied, director of facilities innovation and planning at L+M.

Following the 3P event, the team moved quickly into detailed design. Working side-by-side with Suffolk and L+M, TRO JB’s architects and engineers were able to accelerate the design phase. “Working together in an IPD process takes everyone out of their own silo,” said Keith Jones, AIA of TRO JB. “Suffolk’s project leaders were aware from day one of what we were trying to accomplish with the design. With Suffolk providing continuous pricing information, we were able to validate the decisions together and confidently move ahead in sync with the budget.”

Co-location of the team members provided tremendous advantages by removing barriers to communication and allowing a shared base for reviewing schedule progress together, updating the virtual models and suggesting ways to create additional cost efficiencies.

The cancer center opened a year earlier than originally projected, a stretch goal of the IPD team.

Because there were no handoffs from one team or phase to another, and because the integrated model enabled overlapping schedule tasks, the typical timelines for hospital construction were recast. Design and construction were completed in 17 months; corresponding sitework took two months.

The project was also delivered at a significantly lower cost than projected. Only two changes were made to the original contract scope — both requests by the hospital as value-added additions. The team had the flexibility to resolve any increase in cost with immediate adjustments elsewhere to keep on track.

Sustainability to produce a healthy environment

Sustainable design elements of the project include: abundant natural light throughout, a geothermal system for heating and cooling and use of chilled beams to reduce energy consumption. A LEED Silver certification is expected.

Interior finishes were selected according to criteria that maximize indoor air quality, essential for immune-compromised patients, and require less maintenance than traditional healthcare finishes. A geothermal system was added into the project design after the team conducted a study on value, cost and payback at the hospital’s request. Chilled beams recalculate air; adding these eliminated 50 percent of the ductwork and reduced the amount of space required for mechanical equipment.

Taking ownership: IPD and the culture of transparency it fosters demand an “own it” mindset from every individual on the team. The absence of silos and finger pointing produces an environment of creativity, trust and innovation.

Committing time and resources: IPD requires a significant commitment of time compared to more conventional project delivery methods. The owner and its IPD partners need to invest the time together at the table and in decision-making to be successful. The building team members also need to commit more time and resources and offer a level of engagement that inspires others.