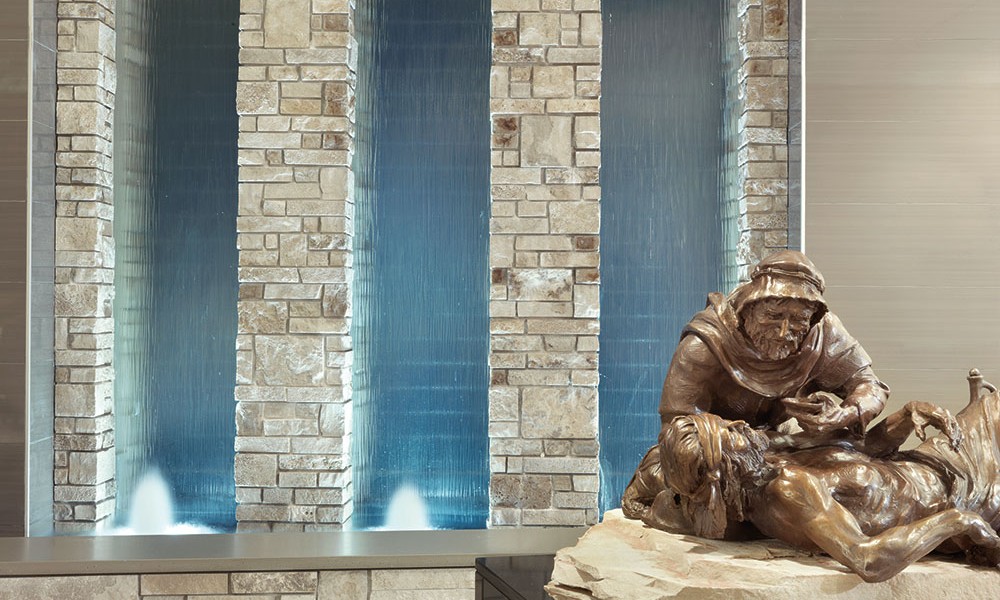 Over a dozen regional artists were commissioned to provide artwork that helps promote a healing environment. 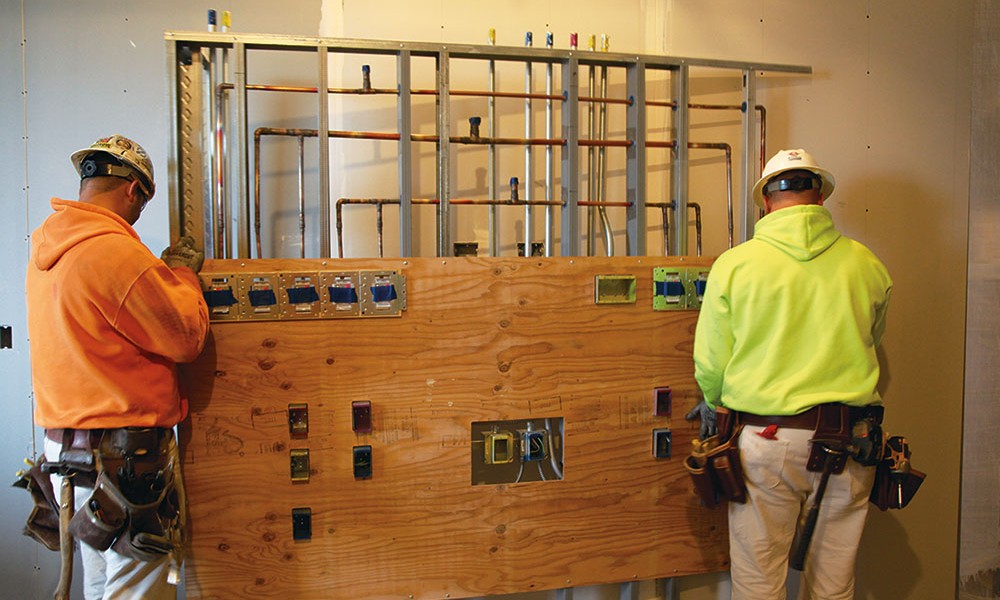 Prefabricating components of the new facility helped the team to stimulate local trades. McCarthy rented warehouse space close to the jobsite, where 135 headwalls and 134 panelized patient restrooms were constructed well ahead of when they were needed on the project site. 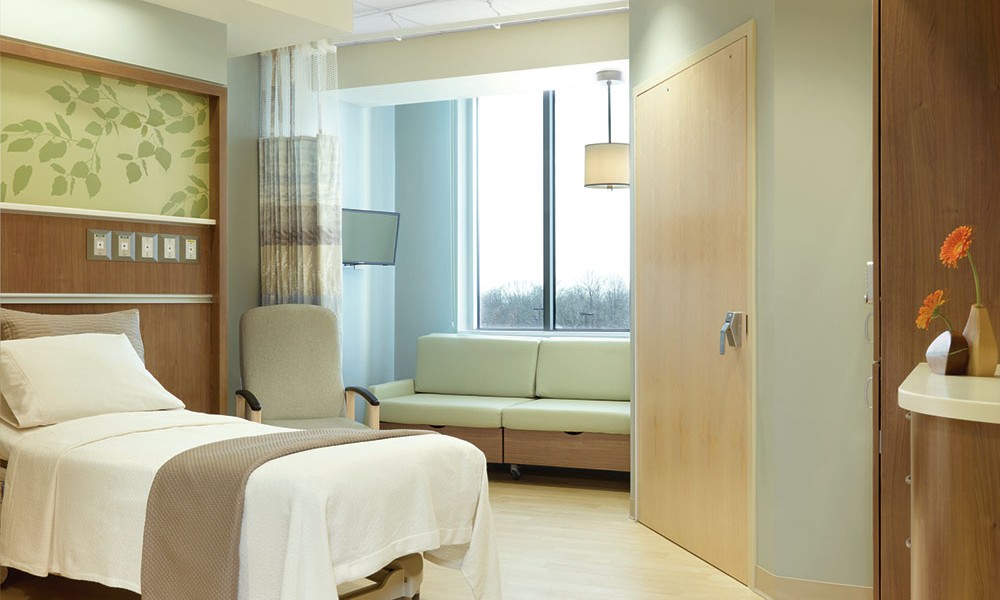 The patient room headwalls and restrooms were constructed in an offsite warehouse where those components were assembled to increase productivity and quality. 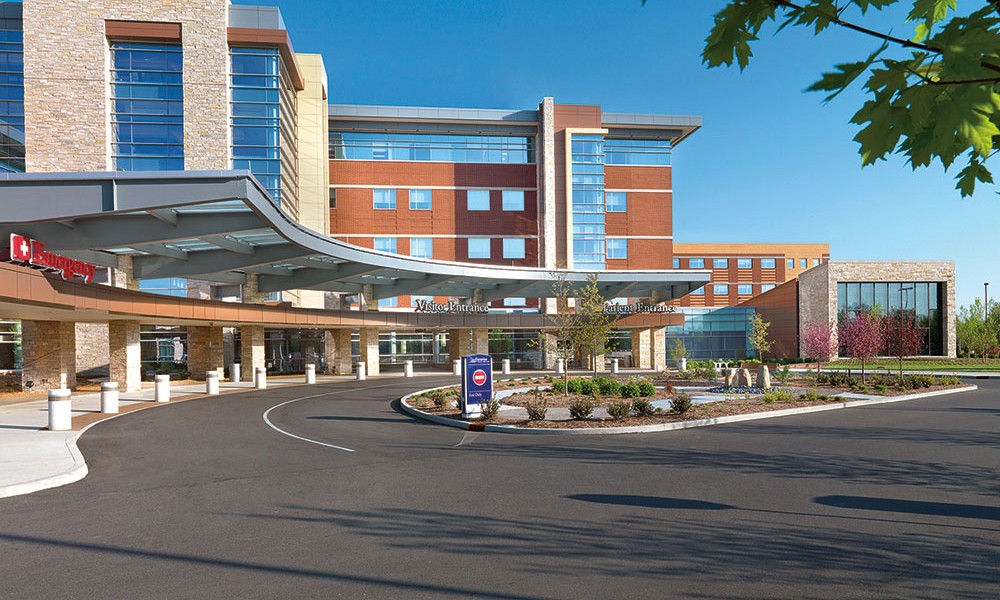 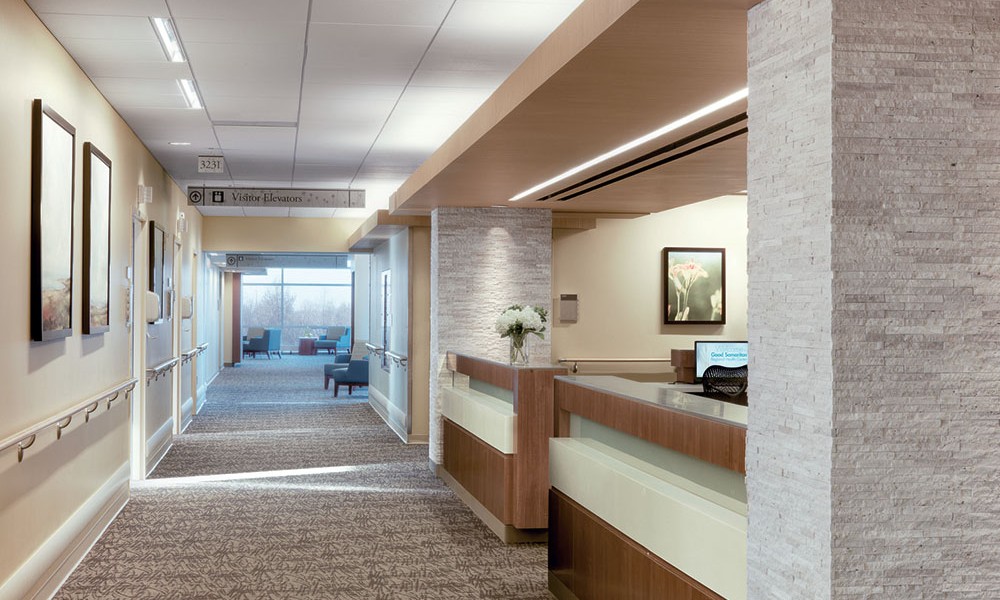 The configuration of the caregiver stations provides constant interaction with the patient and allows support functions to be located in the core of the nursing unit. These decentralized caregiver stations also reduce noise and promote a collaborative work space that is proximate to each patient room.
◀ ▶

A healthcare project designed before the economic downturn that then stalled for several years is not news. But by using a creative and community-focused design and construction team, the extra time the downturn provides can be capitalized to incorporate innovations and to strengthen relationships in order to produce a project that exceeds everyone’s expectations. Such was the case with the recently opened, 382,000-square-foot Good Samaritan Regional Health Center in Mount Vernon, Ill.

The success of the project starts with the team. BSA LifeStructures was on board first and set the tone for the project, along with the owner. McCarthy Building Companies, Inc., in partnership with Lipps Construction Company Shores Builders, were hired as construction managers at-risk in 2006.

Work on the design began with input from the community. Throughout the design, the community was invited to tour mockups of the hospital. Based on feedback from those sessions and meetings with patients and hospital staff, design advances were incorporated. For example, to help reduce falls, patient lifts were added to most patient rooms and rooms were designed with reduced distance from bed to bathrooms, where 90 percent of patient falls occur.

Then, the financial market took a turn for the worse, and the economic environment made it necessary to delay construction for a period of time. The project team continued to build relationships with each other and the community. The time was used to strategize additional ways to involve more local firms, eliminate waste, improve productivity and create positive outcomes for the project once it was underway.

Because of the downturn, there was more time to get to know one another. A highlight of the project was the delivery system, which operated more like an Integrated Project Delivery project or IPD lite. All members of the project team worked together as one entity in the best interest of the hospital and the community. The team interacted and collaborated with an IPD approach without an official tri-party arrangement in place.

In November of 2009 the team received approval to proceed with the project. Construction would start in spring of 2010. The replacement hospital, co-sponsored by SSM Health Care and Felician Services, would nearly double the size of the current hospital, taking it from a small community hospital to a regional medical center serving the larger southern Illinois community. The project would also include a 141,000-square-foot medical office building connected to the hospital.

McCarthy took a phased bid package approach early on in order to allow the project to break ground by April of 2010 and still obtain the proper project reviews by the Illinois Department of Public Health. McCarthy self performed the concrete foundations in order to kick-start the project and infuse it with a sense of urgency. As the contract documents were created in 2006, before 3-D drawings were commonplace, the construction team redrew many of the drawings in 3-D to aid with the coordinated effort.

The construction team used document control software for collaborative electronic document management and mobile kiosks in the field to enable all field staff to have access to updated project information in real-time. Team members utilized iPads to view drawings while walking the job. Periodic changes were tracked and documented as they were developed with the design team and implemented in the field to minimize rework and improve overall project efficiency.

The hospital consists of a garden level and five floors with 134 all-private rooms with multiple flat-screen TVs and free Wi-Fi. Design features include decentralized nurses’ stations to reduce the distance between patients and caregivers, music and art throughout the facility to promote a healing environment, green concepts for energy savings and a family zone in patient rooms for loved ones to stay overnight.

The design of the facility also strives to improve patient safety and outcomes using the latest medical technology and equipment. It is the first hospital in southern Illinois to offer robotic surgical technology.

The hospital additionally features electronic medical records, a sophisticated security system to ensure the safety of all newborns and operating rooms with video integration.

Each operating room features a video monitor that can display patient information and an X-ray, scan or video when cameras are used during a medical procedure. Most patient rooms feature patient lifts and are equipped with advanced call systems.

“The hospital’s design combines a holistic healing approach with Evidence-Based Design,” said Derek Selke, director of architecture and lead designer on the project for BSA LifeStructures. “The configuration of the caregiver stations provides constant interaction with the patient and allows support functions to be located in the core of the nursing unit. Decentralized caregiver stations also reduce noise and promote a collaborative work space that is near each patient room.”

The health center features an expanded emergency services department, a women’s center offering a full-range of women’s health services, a one-stop procedure center and three entrances to get patients and visitors in and out in the most efficient and convenient way possible. The connecting medical office building includes a surgery center and numerous outpatient diagnostic services.

Prefabricating components of the new facility also helped the team to stimulate local trades. Warehouse space was rented close to the jobsite, where 135 headwalls and 134 panelized patient restrooms were constructed well ahead of when they were needed on the project site. Using prefabrication in this manner increased productivity and quality.

A substantial amount of project costs and time were saved as a result of these prefabrication efforts. Job safety was also improved, because of work being performed in a climate-controlled warehouse in lieu of the jobsite, which prevented subcontractors from having to work on top of each other in such close quarters for that portion of the work.

A relationship was maintained with the Illinois Department of Public Health throughout construction, so there were no surprises during final inspections and the hospital was able to open on schedule.

“This new health center is the culmination of a vision and a tremendous amount of hard work on the parts of so many,” said Good Samaritan President Mike Warren. “Ultimately, we wanted to raise the bar for healthcare in southern Illinois and, in the end, I think we exceeded even our own expectations.”