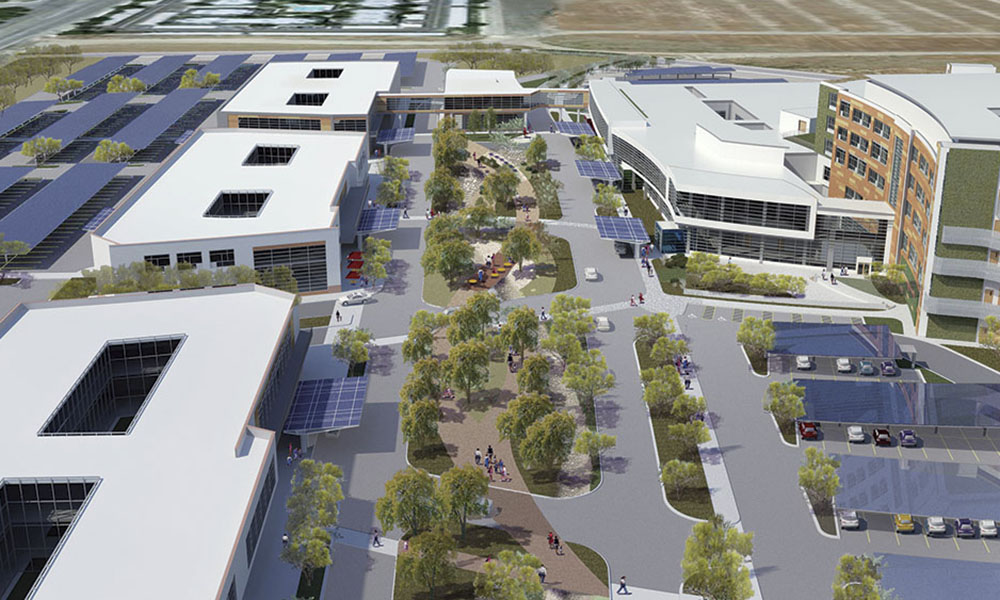 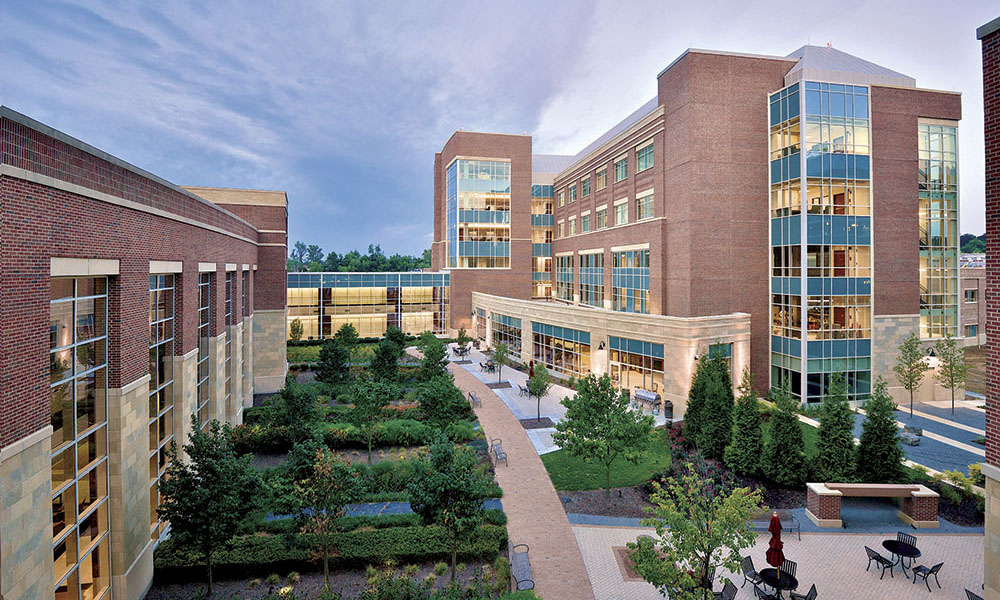 Extensive windows, light wells and gardens at Miami Valley Hospital South in Ohio improve daylighting and provide patients and staff with the healing benefits of natural light and views.
◀ ▶

We all love to discuss sustainable “hospitals of the future,” using renewable Energy to produce even more than they consume. And these are vital conversations. Healthcare facilities are tremendous energy consumers and generate about 8 percent of greenhouse gases worldwide. That’s a big deal when, in America alone, air pollution from each degree temperature increase caused by CO2 can lead to about 1,000 additional deaths annually and many more illnesses.1 Reducing those numbers even slightly can make a big impact.

Talk is cheap, however, and we must balance eco-friendly dreams with our clients’ fiscal realities as they work to accommodate the Affordable Care Act, lower healthcare costs and remain financially solvent. Return on investment is crucial as clients decide between high-impact green design and more conventional methods. It is our responsibility to make this choice easier for clients and beneficial for the environment by thinking creatively to holistically improve ROI and promote long-term fiscal, social and environmental health.

Despite early successes, changing market conditions have altered utility and solar relationships and more recent news indicates a parting of ways. Solar energy prices are dropping and becoming more directly competitive with electricity. One report by Swiss investment bank UBS predicted a boom in unsubsidized solar photovoltaics in Europe, a shift from marginal to mainstream.3 Sustained decreases in manufacturing and operating costs are driving that shift, with reports citing decade-long cost declines and a 75 percent price drop since 2009.4 The UBS report even cites cases in Germany where solar energy is cheaper than grid electricity. Under these circumstances, solar and utility companies are becoming more direct competitors and less likely partners, forcing consumers to seek alternatives.

Fortunately, falling solar costs have opened doors for new partnerships. These decreases have dovetailed with decreases in the cost of battery manufacturing, creating a mutually beneficial partnership opportunity with several prospects for improving ROI:

Battery-solar partnerships can provide what the UBS report terms “a partial hedge against increasing energy prices or general cost inflation.” Given market fluctuations and rising utility prices, that hedge could be a boon for long-term ROI.

While in the early stages of development, battery-solar partnerships are an important option as designers work to make renewable energy affordable. Additional options include solar-utility partnerships, in areas with willing utility companies, and Solar Power Purchase Agreements, with a third-party investor owning and operating a photovoltaic system hosted on a hospital’s property and selling energy to that hospital. These relationships can lower rates for hospitals while also providing income and tax credits for investors.

Each of these options brings advantages and disadvantages, and should be weighed against a hospital’s individual needs and local energy market. However, the willingness to think outside of the grid and creatively work around cost constraints should be a universal mentality, not just for the sake of clients, but for the sake of the patients and the environment.

Embracing renewable energy and renewable energy partnerships requires a more holistic definition of ROI encompassing environmental and social effects and the long-term costs of those ramifications. This definition of ROI should echo the World Commission on Environment and Development’s definition of sustainability — “meeting the needs of the present without compromising the ability of future generations to meet their own needs.” Many hospitals do not need solar power to meet the needs of the present generation — electrical power is available, and it is cost-competitive. However, in the long term, relying solely on electrical power could impair a hospital’s ability to meet future financial needs as utility costs rise, and to fulfill future environmental needs of the population at large, as hospitals continue to produce greenhouse gases with alarming rapidity.

Beyond the numbers, there is a social and moral duty to consider how decisions impact the overall health of the community and environment. That responsibility encompasses the pursuit of renewable energy sources to decrease CO2 emissions and attendant health complications. While working to lower CO2 emissions, however, there is a second responsibility — keeping costs down and making healthcare more affordable. Decisions based on ROI affects the financial bottom line, the patient healing environment, hospital staff environment and the environment, healthcare or otherwise, that future generations must live with. It’s time to think more creatively.

Author: Michael Compton
Michael Compton, LEED AP BD+C, is a designer in Gresham, Smith and Partners’ healthcare market. He is a strong proponent of sustainable design practices and teachings and has taught university-level classes on sustainable architecture and design.