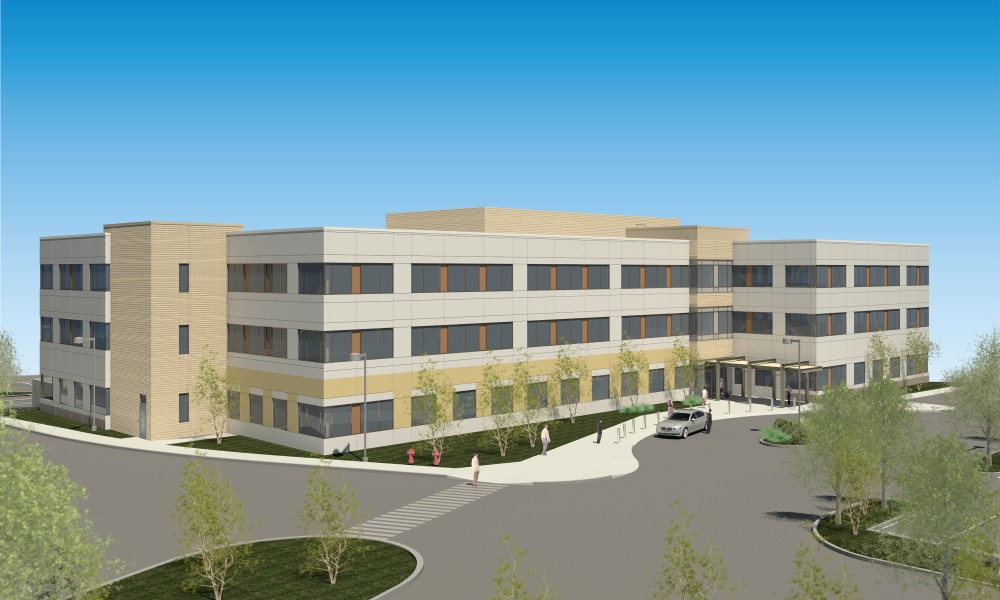 Denver-based NexCore is developing the three-story MOB in collaboration with Saint Alphonsus Health System, a four-hospital, regional Catholic ministry that serves 700,000 people in Idaho and Oregon.

The Garrity MOB will add Class-A physician office space to the new campus and will be located only a short walk from the existing Health Plaza. The MOB and all associated site work are scheduled to be completed in the fall of 2014.

“This medical office building will provide our patients with easy access to quality healthcare and will complement the inpatient and outpatient services at the I-84 and Garrity Campus, which provides, among other services, ambulatory surgery, maternity care, heart care, emergency and urgent care, breast care and lab and imaging services,” says Karl Keeler, president & CEO of Saint Alphonsus Medical Center – Nampa.

Medical Office Building Design
“This new MOB is being developed around many innovations in architecture and construction sequencing to optimize land utilization, shorten the build time and lower overall project costs,” says Jarrod Daddis, executive managing director of development & acquisitions at NexCore. “We have also strategically positioned the MOB on the campus for high visibility along Interstate 84 and convenient adjacency to the existing Health Plaza.”

By working closely with Saint Alphonsus, the civil engineer and the architect, NexCore designed a three-story MOB that is being constructed into the prominent hill on the site. The MOB will be placed on top of a one-story, open parking level to take advantage of the site topography and to create covered parking for physicians.

The MOB façade was designed to complement the look and materials of the existing Health Plaza, as well as the Emergency Department, Heart Care Center and Maternity Center. The 22,000-gross-square-foot floor plates were designed in an L-shaped configuration to provide a centralized entrance into the MOB, limit patient walking distances and maximize the buildable area onsite. The floor plate design creates operational efficiencies for physician tenants by providing larger contiguous lease spaces than are possible with a traditional rectangular floor plate.

“The NexCore team has designed an efficient outpatient facility that incorporates patient-centered environments, a component of healthcare delivery that’s important to Saint Alphonsus,” says Mike Chidester, regional director of real estate for Saint Alphonsus Health System. “The new facility will be a significant addition to our campus.”

Medical Office Building Program
The first floor of the MOB contains 4,900 rentable square feet of physician office space and approximately 16,500 RSF of clinic space. The first floor will include Orthopedics and Physical Therapy with a therapy pool. The second floor also contains 4,900 RSF of physician office space and approximately 16,500 RSF of provider space. The second floor will include Obstetrics & Gynecology and Cardiology. The spaces on these two floors were designed with Lean principles, such as shared waiting room, flexible exam rooms and shared physician office pods.

The entire third floor is dedicated to physician office space.