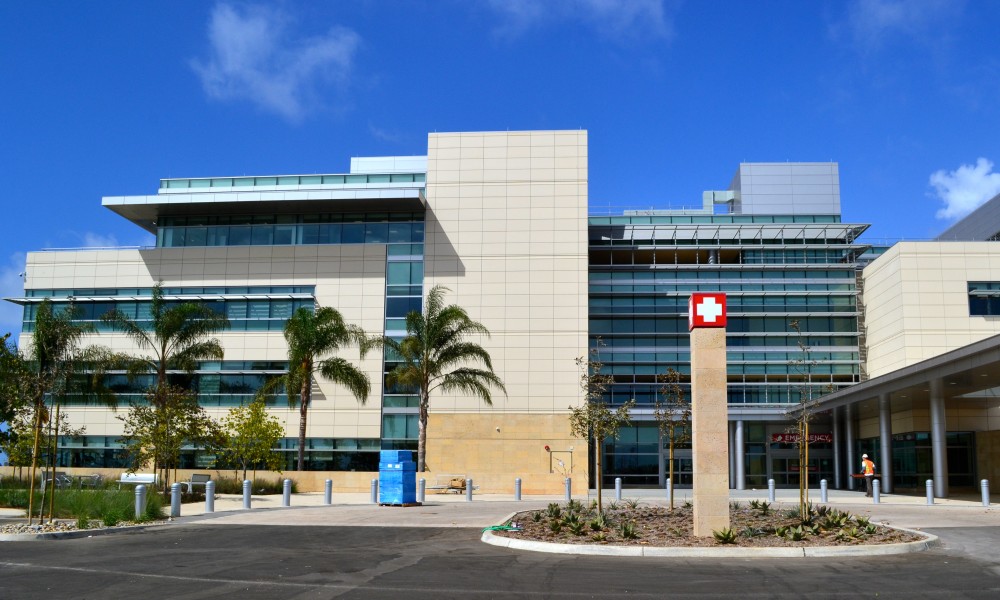 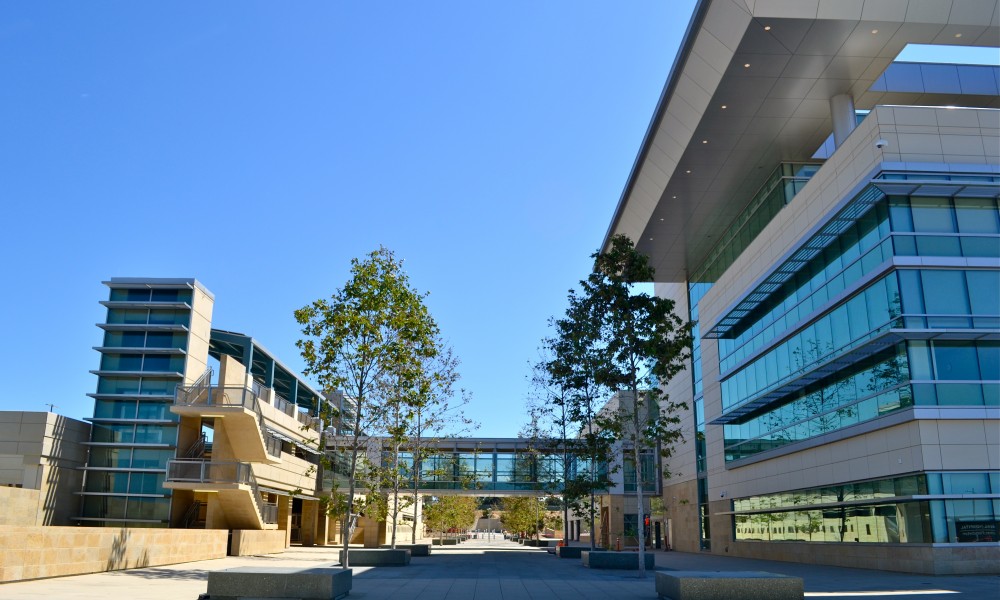 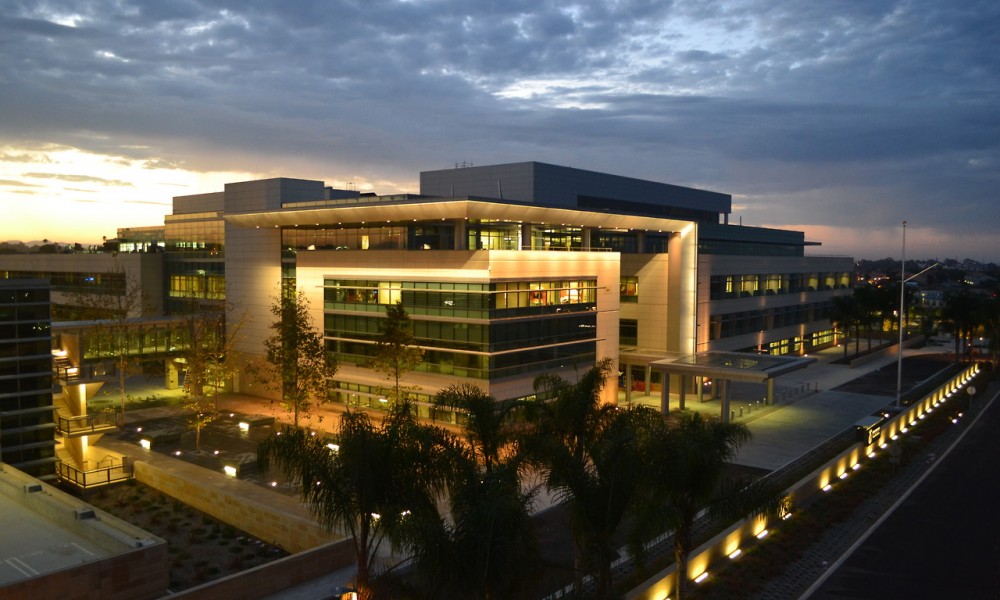 SAN DIEGO, Calif. — Delivering the project six months ahead of schedule and more than $100 million under budget, the joint venture design-build team of Clark Construction Group, LLC, and McCarthy Building Companies, Inc., has completed construction of the new 1,000,000-square-foot (total campus) Naval Hospital at the Marine Corps Base Camp Pendleton.

“The replacement hospital is a facility ‘catch-up’ for the progress of modern medicine, since the last facility was built in the early 1970s,” said Capt. Mark A. Kobelja, commanding officer of the Naval Hospital Marine Corps Base Camp Pendleton.  “The new facility utilizes Evidence-Based Design to enhance healing for patients, as well as efficient and effective design to conserve water and energy, protect from earthquakes and optimize the work environment for staff.  Designed as a like-for-like replacement of existing capabilities, the new facility will greatly enhance those capabilities with the newest facility and equipment technologies. Add in the ocean view, large windows, greenery and pleasing finishes and textures throughout, and it’s little wonder our staff and patients are ready to move in.”

Situated on a 70-acre site near the south entrance to the Marine Corps Base Camp Pendleton, the new Naval Hospital will employ a staff of around 1,100 physicians, nurses and support personnel who will serve around 70,000 active-duty and veteran members of the military and their families.

Providing emergency, primary, intensive and specialty care, the new hospital will have 96 outpatient procedure rooms, 205 exam rooms, ancillary departments, support spaces and 54 patient rooms accommodating up to 60 beds for non-ambulatory patients who require stays in excess of 24 hours. Reflecting the mostly young military population it serves, the hospital will also have eight labor and delivery rooms, together with 16 post-partum suites.  Outpatient care alone is expected to reach around 2,000 visits per day.

The hospital is expected to earn LEED Gold certification and features numerous sustainable elements, most notably an energy system that will outperform baseline standards by 30 percent.

The new Marine Corps Base Camp Pendleton Naval Hospital is replacing an older facility built in 1974 near Lake O’Neil that no longer complies with current seismic, anti-terrorism and general force protection standards for hospitals, and will instead be used for administrative offices and storage.  Patients from the existing hospital will be transferred to the new hospital in mid December.  A ribbon-cutting ceremony is scheduled to take place on Jan. 31, 2014.

The scope of work by the JV team also included construction of a central utilities plant with 3,100 tons of cooling and redundant utility systems to allow the hospital to remain independently and fully functional for three days in the event of a power outage. It also included construction of a 1,500-space parking structure and 1,000-space surface parking area, which will double the parking capacity of the existing hospital.

In addition to the Clark/McCarthy JV’s $394-million base contract, the U.S. Navy adopted two modifications.  The first included the purchase of conservation banking credits to mitigate and increase the amount of endangered coastal sagebrush within the project boundary.  The second modification incorporated roughly $42 million worth of medical equipment, furniture and artwork.  In collaboration with NAVFAC and the Navy Bureau of Medicine and Surgery, the Clark/McCarthy JV team developed a medical equipment package utilizing the Basis-of-Design specifications and the experience of user groups to select more than 20,000 pieces of equipment and coordinate the building infrastructure to accommodate it.  Best Value Determination was used for every item, allowing the Navy an opportunity to compare models, options, maintenance contracts and lifecycle costs.

“This later modification was a first for the Department of Defense and NAVFAC, and significantly added to the typical design-builder requirements by calling for a team that was well-versed in medical equipment planning, procurement, installation and training,” said Carlos Gonzalez, P.E., project director for the Clark/McCarthy JV. “This turnkey delivery method had a positive impact on the project outcome, allowing the team to maximize quality, minimize added costs and expedite the construction schedule.”

The design goal was to create a world-class, timeless, landmark facility fitting of the prominent site overlooking the Pacific Ocean that would reflect the timeless values of the U.S. Navy and Marine Corps while accommodating the latest in Evidence-Based Design best practices in healthcare services. Another primary goal was to achieve LEED Gold certification – an ambitious aspiration for a state-of-the-art hospital that operates around the clock.

Sustainable design features include green roofs, healing gardens and an atrium open to the sky. The building’s energy performance is 30 percent better than baseline standards set by the American Society of Heating, Refrigerating and Air-Conditioning Engineers.  The team went above and beyond efforts needed to achieve all five Innovation in Design credits by using more than 20 percent recycled content, reducing water usage by more than 50 percent, restoring vegetative open space that is more than twice the footprint of the building, and implementing a campus-wide education program that highlights the hospital’s sustainability.

The design team fully integrated with the construction team from the beginning through construction, working closely with members on each design submittal and package to ensure constructability, expedite work and control quality and costs. No major construction was started until 65 percent of the design was finalized.

Since jobsite safety is a high priority for NAVFAC, the project team implemented numerous safety initiatives that resulted in zero lost-time incidents through more than 2.5 million man-hours – an astonishing record rarely achieved within the construction industry.

“The Navy had very specific, high standards for the project’s safety plan and requirements,” said Gonzalez.  “The project team not only exceeded expectations, but the processes used were readily embraced by the client and the greater NAVFAC community.”

To date, The Naval Hospital Replacement project at Camp Pendleton is the largest project funded by the American Recovery and Reinvestment Act.