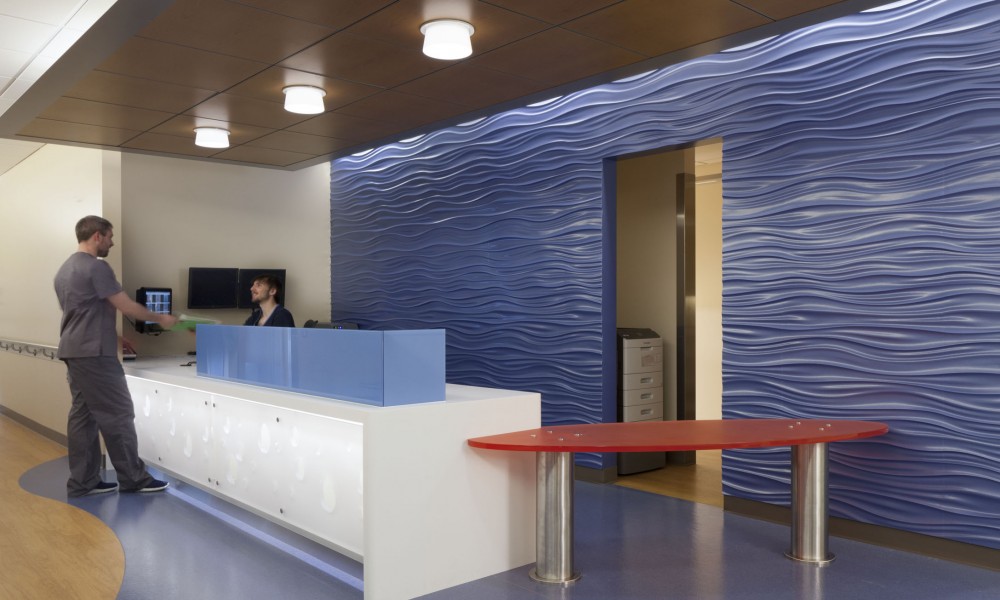 Each floor features a desk that acts as “front door” of the floor. The area features a wave wall that mimics the movement of water. 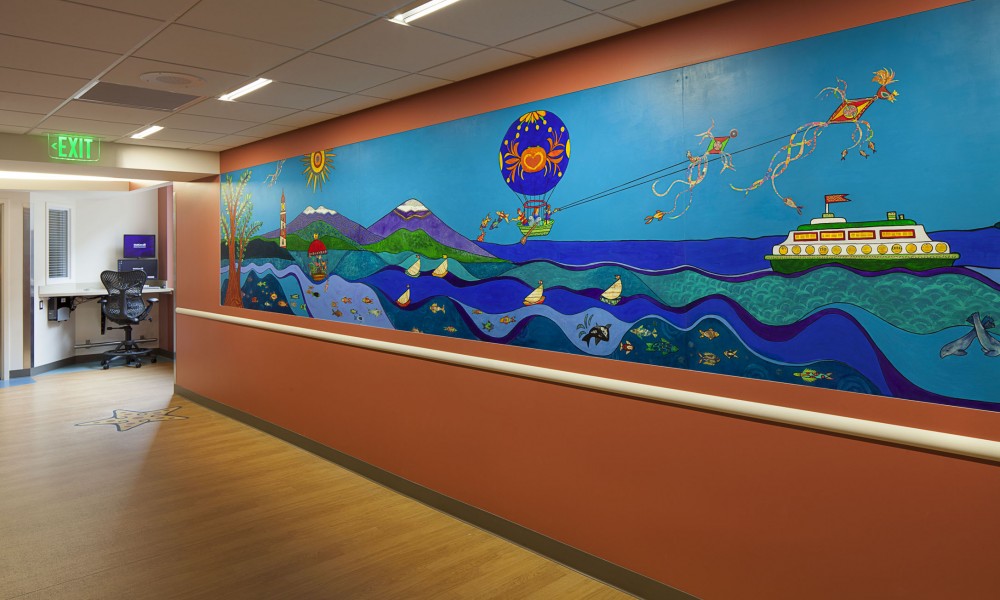 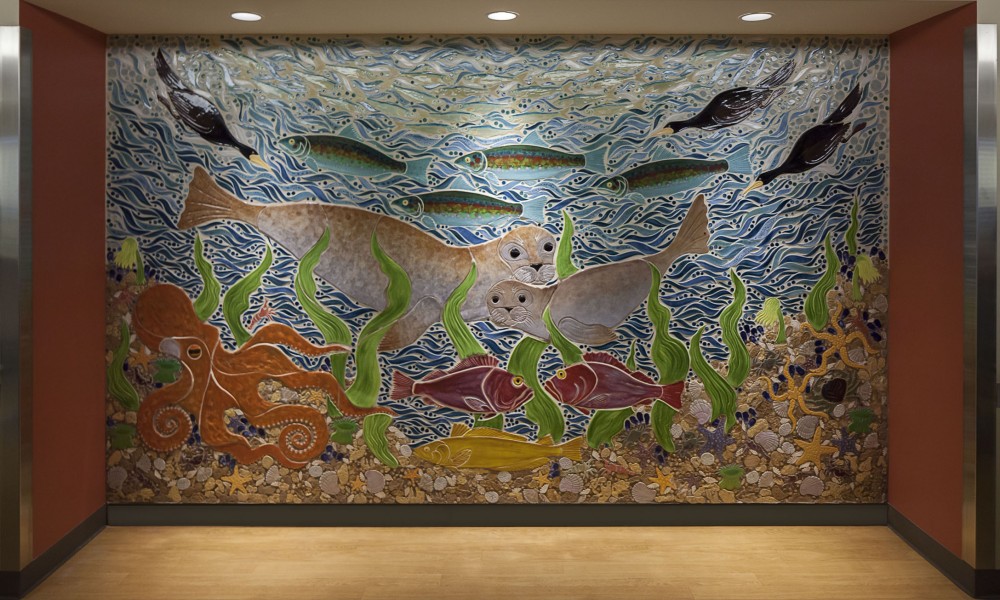 Art was used throughout the expansion to draw patients out of their rooms. This mural by Toms Bugbee Royal, titled “Octopus’ Garden,” depicts the loving relationship between parent and child. 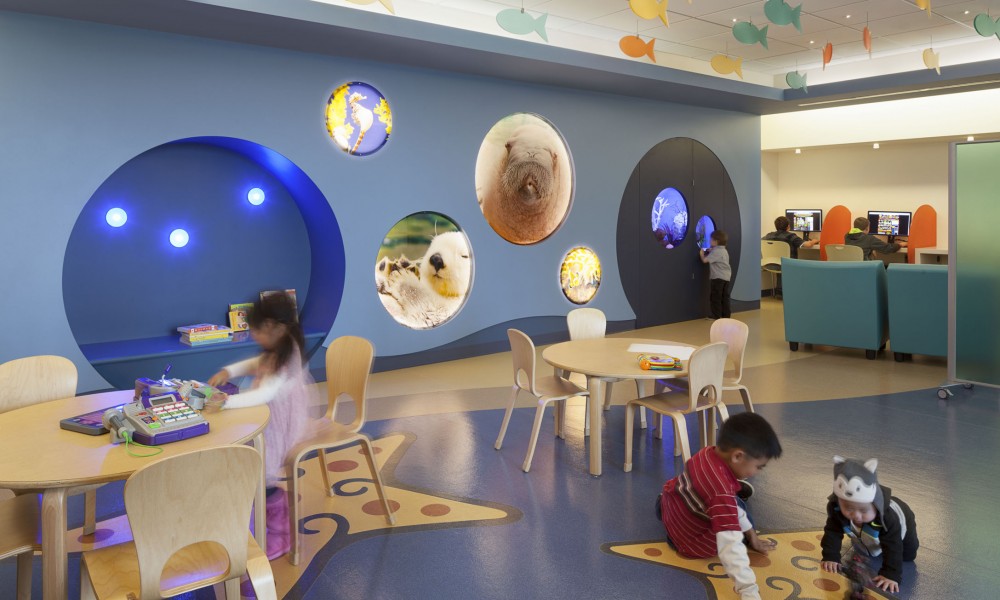 The children’s play area provides a lively getaway for patients and family members. Keeping true to the expansion’s nautical theme, fish figures dangle from the ceiling tiles, images of local sea life are found in cutouts in the wall and starfish decals adorn the floor.
◀ ▶

Art galleries and hospitals aren’t usually compared to each other. But when walking the halls of the new expansion of MultiCare Health System’s Mary Bridge Children’s Hospital and Health Center in Tacoma, Wash., it’s easy to forget which one you’re standing in.

The 52,000-square-foot addition—designed by HDR Architecture with interior architecture developed in collaboration with Bainbridge of Portland, and built by Sellen Construction— opened its doors to patients in June. Built atop an existing five-story structure and surrounded by the greater Multicare Health System campus, the client challenged HDR to deliver a children’s hospital expansion that blended in with the surrounding buildings, and, well, didn’t look like a children’s hospital.

“The expansion is a part of an existing building that serves both adults and children, so the design needed to be appropriate for all ages,” said Peter Damento, senior designer in HDR’s Seattle office. “Instead of creating a whimsical exterior, as is typically done when designing children’s hospitals, we created a playful interior that highlights the landmarks and life found in and around Washington’s Puget Sound—a theme people across the age spectrum can enjoy.”

The Puget Sound, which is an inlet of the Pacific Ocean, is home to a wealth of coastal life, from the giant pacific octopus to harbor seals, sea lions, Dungeness crab and orcas. Although this theme is seen in all areas of the expansion, from colorful fish shapes dangling from the ceiling to photographs of sea animals living at Tacoma’s Point Defiance Zoo, the theme is most evident in the hospital’s expansive art program.

“Though the artwork found in the expansion would be stunning anywhere, its place in a children’s hospital is extremely significant,” said Andrea Bainbridge, principal at Bainbridge. “It acts as a positive distraction for children and parents who are enduring high-stress situations, and whose spirits are often low. Even though most patients are restricted to staying inside the building, the artwork—in a way—transports them outside to spaces they know and love.” 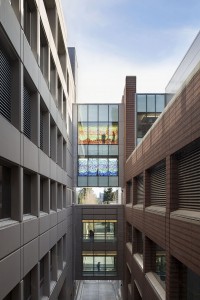 The most architecturally significant piece of art is the glass float installation titled “Chiya,” which is the Japanese word for healing. The installation consists of more than 1,300 hand-blown glass floats placed within the double-paned windows encasing the expansion’s two sky bridges. The floats were created by students in the Hilltop Artists program, a program that uses art as a means to reach out to at-risk youth.

“The Chiya installation is beautiful to look at, but it also serves a purely functional purpose,” noted Damento. “Although many of the patient rooms have views of Mt. Rainer and the city of Tacoma, some rooms face an interior ambulance driveway. Chiya’s glass floats give these rooms a one-of-a-kind view, while also blocking views into the patient rooms and providing visual appeal to people walking over the sky bridges.”

Similar glass floats are found in two colorful installations titled “Bella Nautilus,” which suspend from the ceilings in the “diving boards” — two cantilevered viewpoints offering a panoramic look into the outdoors. The floats seen in both installations were inspired by the glass floats once used by fishermen to keep fishing nets afloat.

While walking the halls of the expansion, passerbys come upon four large mosaics made of elemental tile shapes emulating local marine animals. “The Storyteller,” by Mauricio Robalino, is inspired by Native American storytelling and depicts the generous bounty found in the Puget Sound. “Orca Bay” and “Octopus’ Garden,” both by Toms Bugbee Royal, show the loving relationship between parent and child, and showcase the elusive giant pacific octopus and playful harbor seals. “Octopus and Friends,” by Jennevieve Schlemmer, also features the giant pacific octopus and other creatures found in the air and water.

All of the artwork throughout the expansion includes elements aimed at altering people’s frame of mind. For example, when children are taken to treatment areas to undergo uncomfortable and often painful procedures, strategically placed artwork, such as the vibrant mixed-media painting “Dreaming of Fish” by Mary Ennes Davis, gets imaginations reeling and provides a positive distraction. Each piece also includes hidden “I spy” elements. Patients are encouraged to find the hidden elements—a fun activity that also strengthens visual motor and perceptual skills.

The artwork was carried into each patient room in an effort to create a sense of “place.” Rooms follow one of eight themes, from starfish and sea lions to orcas, crabs and salmon. This theme is depicted in each room with a very stylized illustration on the footwall and on the room signage. “We wanted children to be able to identify with their rooms by saying, ‘I’m in the salmon room or the orca room,” noted Bainbridge. “It also provides excitement for children who visit often—each visit in a new room feels like a new experience.”

Since the opening of the facility, the design team has been showered with praise from the client, noting that “the building and artwork has truly changed the way we all feel about our work environment.” The most heartfelt and moving reaction came from a nurse who shared a story about a child who was apprehensive about moving to his new room. When the child walked into the new expansion, his eyes lit up and he started to sign ‘fish, ball, octopus, bird, etc.’ Every new feature brought him delight.

“That story is a reminder of why we—as healthcare designers—do what we do,” added Damento. “We’re not just designing beautiful buildings. We’re designing buildings that matter—places where patients heal, families grieve and staff provide lifesaving care. Everything in this expansion, from the artwork to the design of the patient rooms and caregiver areas, contributes to creating a wonderful place of healing for an extremely special patient population.”

Author: Marjorie Brown
Marjorie Brown, AIA, LEED AP B+C, NCARB, is a vice president with HDR Architecture and the managing principal of its Northwest offices. She is based in Seattle, Wash.