LA JOLLA, Calif. — Scripps Health recently celebrated the completion of the exterior “skin” of the new Prebys Cardiovascular Institute’s building and the unveiling of the landmark sign. Former San Diego Mayor Jerry Sanders also agreed to serve as the chairman of the institute’s Campaign for Cardiovascular Care. 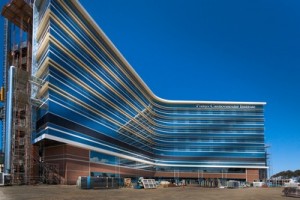 “With the completion of the exterior of the Prebys Cardiovascular Institute, we are one step closer to completing a center for innovation that will bring together leading physicians and premier cardiovascular services in San Diego,” said Scripps President and CEO Chris Van Gorder. “And we are honored that Jerry Sanders, one of San Diego’s most respected and dynamic leaders, has volunteered to serve as the chair of our capital campaign.”

“I am honored to be part of this crucial development phase in what will be a landmark in San Diego,” said Sanders, who currently serves as president and CEO of the San Diego Regional Chamber of Commerce. “The Prebys Cardiovascular Institute will provide our community with access to world-renowned heart specialists, exceptional specialty and cardiac services and lifesaving research.”

The $456-million hospital tower is being financed through a combination of operating revenues, borrowing and community support. To date, approximately $120 million in philanthropic gifts have been raised toward the $180-million fundraising goal. As chairman of the Campaign for Cardiovascular Care, Sanders will spearhead efforts toward raising the final $60 million.

The institute was made possible in part by a generous $45-million gift from noted San Diego developer and philanthropist Conrad Prebys. Prebys will serve as the honorary chairman of the capital campaign.

The 383,000-square-foot building, located on the campus of Scripps Memorial Hospital La Jolla, is scheduled to open for patient care in 2015. Rising seven stories, the exterior of the facility is a combination of glass windows, bricks and steel – all designed to complement and blend with the architecture of the existing hospital. The new facility will feature 108 inpatient beds in private rooms, 59 intensive care beds, six state-of-the-art operating rooms and as many as six cardiac catheterization labs with the most advanced medical technology.

The Prebys Cardiovascular Institute is the cornerstone of a 25-year master plan that will transform the Scripps Memorial Hospital La Jolla campus. Scripps Health is replacing the existing hospital with new facilities to meet state earthquake safety mandates.

“The best way we can prepare for a disaster is to prevent it from ever happening,” said Van Gorder. “That is why the Prebys Cardiovascular Institute is being built using state-of-the-art SidePlate design to withstand up to an 8.0 magnitude earthquake.”

Jacobs Engineering Group Inc. is serving as the construction management firm. McCarthy Building Companies, Inc. has been retained as the design-assist general contractor and HOK Architects is the project designer.

The Prebys Cardiovascular Institute and the overall Scripps Memorial Hospital La Jolla expansion are part of improvements being made throughout the Scripps Health system. Projects include a new emergency department and critical care building, medical office building and parking structure at Scripps Memorial Hospital Encinitas, and the new Conrad Prebys Emergency and Trauma Center, a new parking structure and central energy plant at Scripps Mercy Hospital San Diego. Other facility improvements include seismic upgrades and investment in new information technology.