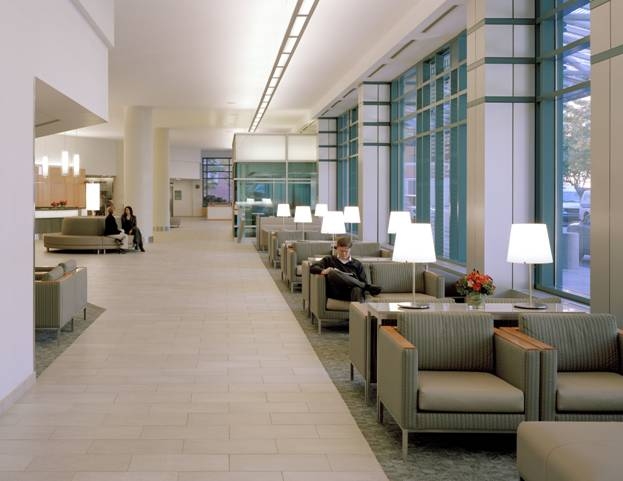 New patients approaching a healthcare campus for the first time — and usually running late for an appointment with a new doctor — expect to quickly and easily find the closest parking spot near the right building, and then travel the shortest distance to a comfy chair in the right waiting room of the right department.

When a receptionist who greets the frustrated patient hears “Phew! I thought I’d never get here! How am I ever going to find my way back to my car?!,” the chorused response is often, “We hear that a lot. Sorry. It would be easier if you just follow me.”

Whether the campus is new or renovated, patients and visitors shouldn’t have to pack a sack lunch in preparation for a visit that is more of a travel adventure than a straightforward task.

All too often, wayfinding problems stem from environments that have been expanded, are too symmetrical (e.g., two identical-looking buildings standing side by side), or have ineffective separation between public and private areas. Poor wayfinding is also reflected in unclear destination routes, the lack of an intuitive hierarchy of pathways and the appearance of complex signage at every turn.

Clear navigation results when the physical design of the environment addresses the need for intuitive wayfinding from the start of the initial campus master-planning process and throughout the campus’ life. Effective wayfinding strategies not only help patients and visitors find their destinations; they also reinforce the healthcare organization’s brand and support staff efficiency.

Unify the environment with clear orientation
For a new campus, the master plan should consider directional orientation and optimal views of the outdoors, providing intuitive cues to position and routes. For example, on one side of the building is a view of a nearby landmark structure, such as a war veteran’s memorial. On the other side of the building is a view of natural landscapes like a mountain, river or garden. As people traverse the structure, they easily associate the memorial with one direction and the mountain with another.

It is imperative that the master plan consider the orientation and potential design of future annexes and additional buildings to incorporate clear transitions. Prevention is much easier and certainly more logical than trying to sew it together later.

Consider a common situation on an existing healthcare campus: there are two neighboring buildings, each constructed in a different phase of campus development, yet housing similar programs. Now the plan is to connect the two by a new corridor or pedestrian bridge to unify the two structures. But the floor-to-floor-heights differ, the elevator cores are in different locations and the interior designs are altogether different. As a result, visitors can become easily disoriented.

The initial objective with the design solution is to understand the problem as a “singular” pathway, or environment, from the appropriate entry to a clear destination and back again — despite the markedly different physical structures.

Determine routes by circulation patterns
With points of access to public spaces, a person usually finds the way without an escort. From non-public environments, a staff member escorts a patient on foot, on a stretcher, or in a wheelchair, where the staff member knows the way. Non-public circulation also includes routes for materials management, food service, and so forth, which take place out of the public’s view.

For new campus plans, the wayfinding designer must scrutinize all perceived routes. While this might sound obvious, overlooking even one route can cause quite a tangle later. With this task, the designer should consider the following:

Then, a map should be created of the ideal circulation pattern among and between these points.

Campus circulation should clearly identify, if not segregate, loading docks, emergency vehicles, staff parking and deliveries. If possible, campus wayfinding can also benefit by a clear separation of inpatient from outpatient or ambulatory services and visitors. Some services, such as the oncology clinic, would benefit by dedicated adjacent parking.

Design all routes with an assignment of character schemes, lighting and finishes to produce cohesive, patterned visuals that subliminally propel a person in a forward motion toward one direction or the other.

In an attempt to create pattern and consistency, such as with symmetrical environments or campus buildings where the only difference is a building number buried in the recess of the main entrance, the duplication can cause visitors to enter the wrong building or make a wrong turn internally.

Differentiate among similar buildings and circulation routes
On some healthcare campuses, a dominant architectural style can create excessive symmetry — many of the buildings may look alike to new patients and visitors, leaving them feeling confused about their destination. The architectural character itself may be fine, but there is no apparent hierarchy for destination and the wayfinding experience is often a disaster.

Externally, the solution may simply require contrasting the buildings with landscaping and lighting treatments at their entries. Internally, wayfinding decisions should be limited but reinforced by a memorable character or event. Like other symmetrical environments, such as an airport or an apartment complex, a clear path must first be obvious, and then decisions supported by appropriate signage that is visible from every approach.

Clarify unclear destination and return routes with visual portals
Imagine the confusion that results when a patient who arrives at the hospital for an X-ray is walking along a corridor looking for “Radiology,” not realizing that “Diagnostic Imaging” is the same place.

The patient may have been told it was “down the hall and to the right,” but can’t differentiate among the seemingly endless series of brown doors along a hallway painted in solid blue. While each door marks the entrance to a particular imaging department, adjacent doors for utility closets and restrooms also look the same. After passing several doors, one tends to stop and check direction.

Although there are signs, they read “MRI,” “CT,” “Nuclear Medicine” and so on. The patient is looking for the sign that reads, “Radiology,” which isn’t there. The design should reflect obvious public portals or entryways with simple signage in large text using a nomenclature that patients and visitors can comprehend. The use of graphic symbols, as well as Braille on the underside of corridor handrails and on signs, improve navigation for the widest range of people.

Most people are so focused on the goal of arriving to their destination that they forget to think about the return trip. For example, at the lobby level near the elevators, a directory is often displayed, but not on each of the other floors. Visitors often pause in the elevator in an effort to recall whether G is the lobby “ground” level or the “garage” level, and whether “1” is the first floor or the lobby floor. If public entrances are on multiple levels, this only adds to people’s confusion when they try to remember the level on which they parked their car.

Rearrange or reassign ineffective existing circulation
When existing facilities have been expanded over many years, ineffective separation of public and private circulation often results. To correct this, a new plan must be created where the design includes rearrangement or reassignment of interior spaces to re-enhance this separation, including elevator cores that provide dedicated cars for public separate from non-public use.

If that is not feasible, another way is to reroute staff away from public areas, even if the new route is longer. For example, assign public access to one level and non-public access to a level above or below.

Ultimately, the designer should look at the problem from about “30,000 feet” to gain the best view of how to overlay a simple and clear wayfinding system on the campus. This could include relocation of the main entry, insertion of new corridor systems or introduction of a new “public environment” aesthetic theme carried throughout the campus.

Dilute signage clutter with increased subtle visual signals
Signage alone is insufficient for wayfinding. In fact, most people rely more on compelling signals from the environment than on signage to find their way. Unfortunately, many facilities overestimate the value of signage and rely heavily on it, 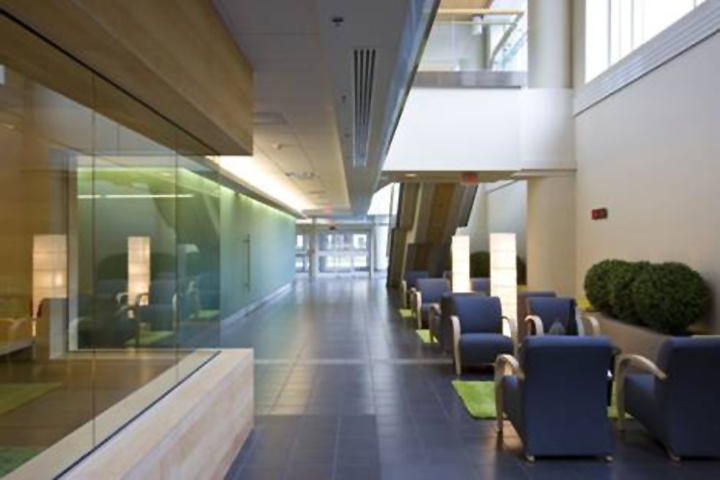 especially as a quick fix in an existing building.

The best design solution includes a cohesive palette of styles, finishes, lighting, colors and furnishings developed according to a hierarchy of spaces from major public spaces, to inpatient rooms and clinical treatment areas, to delivery and staff entrances.

The design must provide subtle wayfinding reminders everywhere along all routes, inside and outside elevators, and at entrance and exit points. The reminders should be blended into a scheme of overall continuity through color, wall and flooring accents, and well-planned architectural segues. Directional cues placed at intersections using memorable objects can help with orientation, such as small groupings of unique furniture, a fish tank or stained glass window, exterior views, plant groupings that include a tree, or patient artwork.

The design should also use bold accents that mark entrances to departments, such as striking granite columns or abrupt changes to wall finishes and flooring type.

Flooring is very important to wayfinding, as most people glance down as they walk. Applying one type of flooring to a main circulation path, despite the transitions from one wing to another and from one building to another, provides a “yellow brick road” sense of direction.

Lighting variations are crucial to wayfinding signals, especially with the added value of energy-saving daylighting techniques. Artificial lighting must be consistent in level and type along public circulation paths, with changes indicating intersections and destinations.

The same hierarchical, consistent approach can be applied with wall coverings, trims, draperies, furniture and artwork. Existing wayfinding problems and the call for branding enhancement can be cost-effectively improved through a thoughtful renovation of interior finishes.

The value of the interior design is not only its application to branding and wayfinding, but also a cost-effective way to manage maintenance and operational costs. Designing consistency of interior finishes warrants initial purchasing power. Consolidation of interior finishes reduces the associated inventory and storage requirements for replacement materials and parts.

The Romans had a civic planning concept based on the Nolli map, so named after an innovative Italian architect who created a map of Rome in 1748. Nolli’s techniques reflected architectural contrast, direction orientation, separation of public and non-public spaces, and clear paths along, between and within structures. This ancient solution remains an ideal benchmark for wayfinding strategies today. When effective wayfinding strategies are applied in the healthcare environment, finding the way “from here to there” can be a pleasure, rather than a stressful experience, for patients and visitors.

Editor’s Note: Stay tuned for the March/April issue of MCD, which highlights signage.