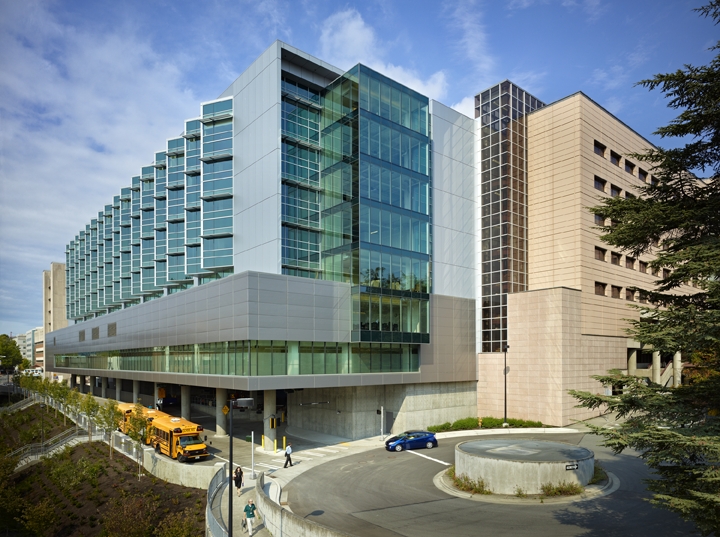 SEATTLE, Wash. — The Montlake Tower addition to the University of Washington Medical Center recently opened. The eight-story, $215-million expansion will provide additional space for premature babies, cancer patients and the latest in radiological imaging technology. Oncology, radiology and a neonatal intensive-care unit each will have a floor in the tower; two other floors will serve computer-service functions and three floors are slated for future clinical use.

The tower is one of the most energy-efficient hospital additions in the Pacific Northwest, outperforming Seattle’s energy code by approximately 30 percent and the national baseline code by an estimated 33 percent. It is among the first facilities to employ recommendations of a 2010 energy-reduction study by the UW’s Integrated Design Lab and a consortium of architects, engineers and builders. Reduced power requirements brought by LED lighting, solar shading and other advantages are projected to save UWMC approximately $276,000 in energy costs annually.

The tower was designed by NBBJ and built by Skanska USA. The project was funded by a mix of UW Medical Center cash and debt. Planning began in 2005 and construction started in 2007. Contractors completed the project on time and on budget.

Patient rooms are located along the tower’s periphery to allow natural light to stream in through large windows and spill into corridors through the rooms’ frosted-glass doors, which slide rather than swing open. In addition, patient rooms and corridors have cushioned flooring for safety and sound absorption. South-facing rooms maximize solar shading and views of Portage Bay, Lake Washington and Mount Rainier, while north-facing rooms overlook a landscaped courtyard of bamboo groves and river cobblestones that glow with colorful lighting at night.

In addition to abundant natural light, patient areas have wheelchair-accessible hand-washing sinks and “front porch” benches along the corridors for patients and their families. The new fourth floor NICU can accommodate 47 infants in 39 single rooms and four rooms for twins. Each room’s lighting is customized to protect the neural development of premature infants. Two isolation rooms have different air pressurization for infants with infectious disease.

The oncology unit on the eighth floor features a 30-bed expansion. To accommodate families, patient rooms on this floor are slightly larger. Bedside portals include plug-ins for laptops and video-game consoles, while dialysis connections on both sides of the bed allow patients to receive IVs in either arm. A nearby conditioning room provides patients with easy access to physical and occupational therapy. Other safety measures include lifts above each bed to help hospital staff move patients, and dual sinks in each room. Both the oncology unit and the NICU have spacious lounges for families, who are often displaced from their homes for weeks or months. The lounges feature comfortable, contemporary furniture, floor-to-ceiling windows, a kitchenette, washer-dryer and a shower.

To accommodate further growth, the Montlake Tower project provides future expansion space for two more MRIs and up to eight operating rooms, as well as three more floors of patient rooms for either 24 ICU beds or 32 medical-surgical beds on each floor.