“We dedicate a 21st Century healthcare center of excellence with cutting-edge technology,” Secretary Shinseki said. “Even more than that, this is a promise kept.”

Designed by RTKL/JMA with the latest in healthcare technology, the facility provides multiple service lines including an inpatient hospital, an ambulatory care center, VBA services, a mental health program and long-term care. Planned with significant flexibility and expansion in mind, this complex will serve as the core for ever-expanding veteran medical services. The master plan for this large, 100+ acre campus will support the addition of multiple new services in the future, while the overall wayfinding system has been kept simple by creatively color-coding each of the major components and linking them with internal malls. The building technology is state-of-the-art, allowing for medical advancements to be seamlessly plugged in over time, and the base infrastructure has been designed to remain operational and secure even during a crisis event.

“The entire campus, from component planning to interior design, was focused on improving outcomes while providing a more holistic approach to treating our veterans. It was a privilege to work on this project and give something back to our soldiers. We honor their service to our country,” said Scott Rawlings, RTKL Vice President.

After almost a decade of design, construction and budget deliberations, the VA Las Vegas Medical Center is ready to start accepting patients August 14, 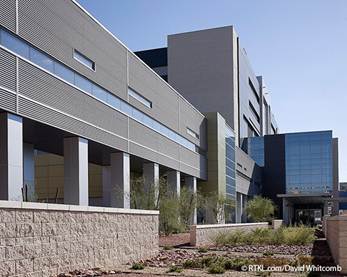 making it the first new VA medical facility in the country for 17 years.

“This is a state-of-the-art facility. I’m so happy that we can finally put it to work,” Senator Reid said.

Reid goes on to say that as the most advanced VA medical facility in the world, the VA Las Vegas Medical Center is the crown jewel of the VA Health System.

About RTKL
RTKL is a worldwide architecture, engineering, planning and creative services organization. Part of the ARCADIS global network since 2007, RTKL specializes in providing its multi-disciplinary services across the full development cycle to create places of distinction and designs of lasting value. RTKL works with commercial, workplace, public and healthcare clients on projects around the globe.  For more information about RTKL, visit www.rtkl.com.

About ARCADIS
ARCADIS is an international company providing consultancy, design, engineering and management services in infrastructure, water, environment and buildings. The company enhances mobility, sustainability and quality of life by creating balance in the built and natural environment. ARCADIS develops, designs, implements, maintains and operates projects for companies and governments. With 21,000 people and €2.4 billion in revenues, the company has an extensive international network supported by strong local market positions. ARCADIS supports UN-HABITAT with knowledge and expertise to improve the quality of life in rapidly growing cities around the world. For more information about ARCADIS, visit www.arcadis.com.