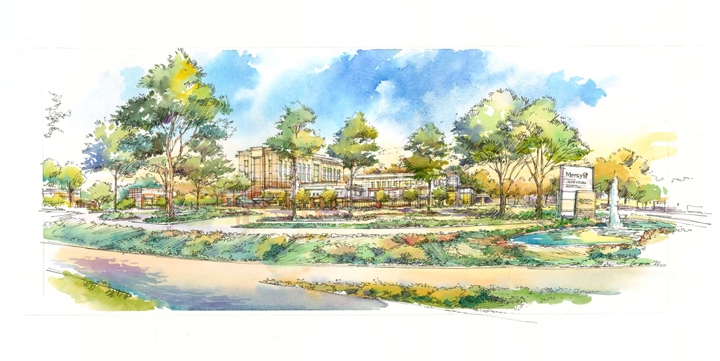 ST. LOUIS, Mo. — Mercy has selected McCarthy Building Companies, Inc. to serve as construction manager for a new 825,000-square-foot hospital in Joplin, Mo. to replace the former St. John’s Mercy Regional Medical Center demolished in the May 22, EF-5 tornado. The deadliest tornado in Missouri and the U.S since 1947 directly hit the hospital.

The new, larger hospital has a construction budget of $335 million and will initially have 261 inpatient beds but expand to 309. Plans include medical surgical, critical care, women’s/children’s (labor, delivery, recovery and postpartum rooms), behavioral health and rehab. The new hospital will be located at the intersection of Interstate 44 and Main Street in Joplin.

McCarthy has been working with Mercy planners to develop the functional program for the replacement hospital since July 2011. The architectural firms of Archimages and HKS are part of the integrated team effort, with Heideman & Associates serving as the MEP Engineer.

“We are making this commitment because it’s the right thing to do for Joplin,” said Lynn Britton, president and CEO of Mercy, which includes 30 hospitals and more than 200 outpatient facilities in a seven-state area. “The May 22 tornado devastated our community in Joplin and destroyed our hospital, but we’ve promised all along we would rebuild.”

McCarthy has worked closely with Chesterfield, Mo.- based Mercy since the disaster, arriving in Joplin just days after the massive tornado struck. The company worked alongside the National Guard and volunteers around the clock to help set up a temporary 60-bed field hospital so that Mercy could re-establish medical services to the Joplin community as soon as possible. The tents have since been upgraded to insulated panels to better endure the winter. The facility is still in use and will serve patients until spring 2012, when a more secure temporary solution, a modular “component hospital,” will take its place.

“McCarthy is honored to serve as a trusted partner with Mercy throughout the years and specifically through this process,” said McCarthy Central Division President Scott Wittkop. “We were passionate about helping Mercy replace its battered building with a temporary field hospital only one week after the tornado devastated the city of Joplin.  We are just as passionate about replacing the temporary hospital with a ‘component hospital,’ and finally a bigger and better replacement hospital to serve the Joplin community.”

In addition, Mercy is accepting donations to help those affected by the tornado: Mercy Foundation for Health Innovation Joplin Relief Fund:  https://ssl.4agoodcause.com/mercy/donation1.aspx?id=1