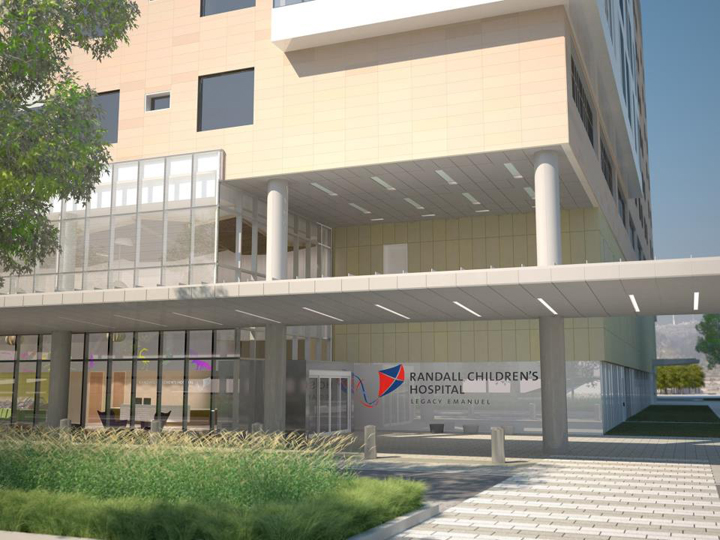 PORTLAND, Ore. — The Robert D. and Marcia H. Randall Charitable Trust has donated $10 million to support and name the new home for The Children’s Hospital at Legacy Emanuel.

“The mission of the trust is to improve and enrich the lives of people of the Pacific Northwest by supporting organizations that provide opportunity to at-risk children and the underprivileged,” said Marcia Randall, donor and co-trustee of the trust.

The new state-of-the-art, nine-story and more than 334,000-square-foot tower will be designed exclusively for the special healthcare needs of children. When the doors open in February 2012, the Randall Children’s Hospital will feature:

• A children’s emergency department, separate from Emanuel’s adult ED, will be twice the size of the current CED: 22 rooms, including four rooms for trauma patients;
• A 25-bed Children’s Day Surgery Unit;
• A Neonatal Intensive Care with skybridge access to labor and delivery and the Family Birth Center on the second floor. The NICU will feature 31 single private rooms, and seven double private rooms for twins;
• A 24 bed pediatric intensive care unit with large private rooms so parents and family can remain with their children and work closely with physicians and other caregivers during treatment;
• Four additional floors of private patient rooms for services such as Oregon’s only inpatient rehabilitation program, as well as: cardiology, hematology/oncology, neurology, orthopedics, trauma and other pediatric specialties.

The gift was announced by George J. Brown, M.D., president and chief executive officer of Legacy Health. “The Randall Charitable Trust’s incredible generosity will help build our new home for The Children’s Hospital and create a 21st-century facility for our clinicians to provide the best in pediatric care for generations to come,” Dr. Brown said.

Randall spoke about why she and the trust chose to support the new building for the Randall Children’s Hospital. “My late husband, Robert and I started from humble beginnings and now, thanks to the hard work of everyone at The Randall Group, we are able to help children to ‘grow well’ and receive the care they need in order to positively move forward in life,” Randall said.

The $30-million fundraising campaign began with an employee effort that raised $2.7 million from Legacy’s six hospitals.

“We are grateful for this generous support from our employees; their level of giving served to inspire the Randall Charitable Trust and several other key benefactors,” said Maureen Bradley, Legacy Health senior vice president and chief development officer.

Take a virtual tour of the hospital at www.legacyhealth.org/kidsonly.