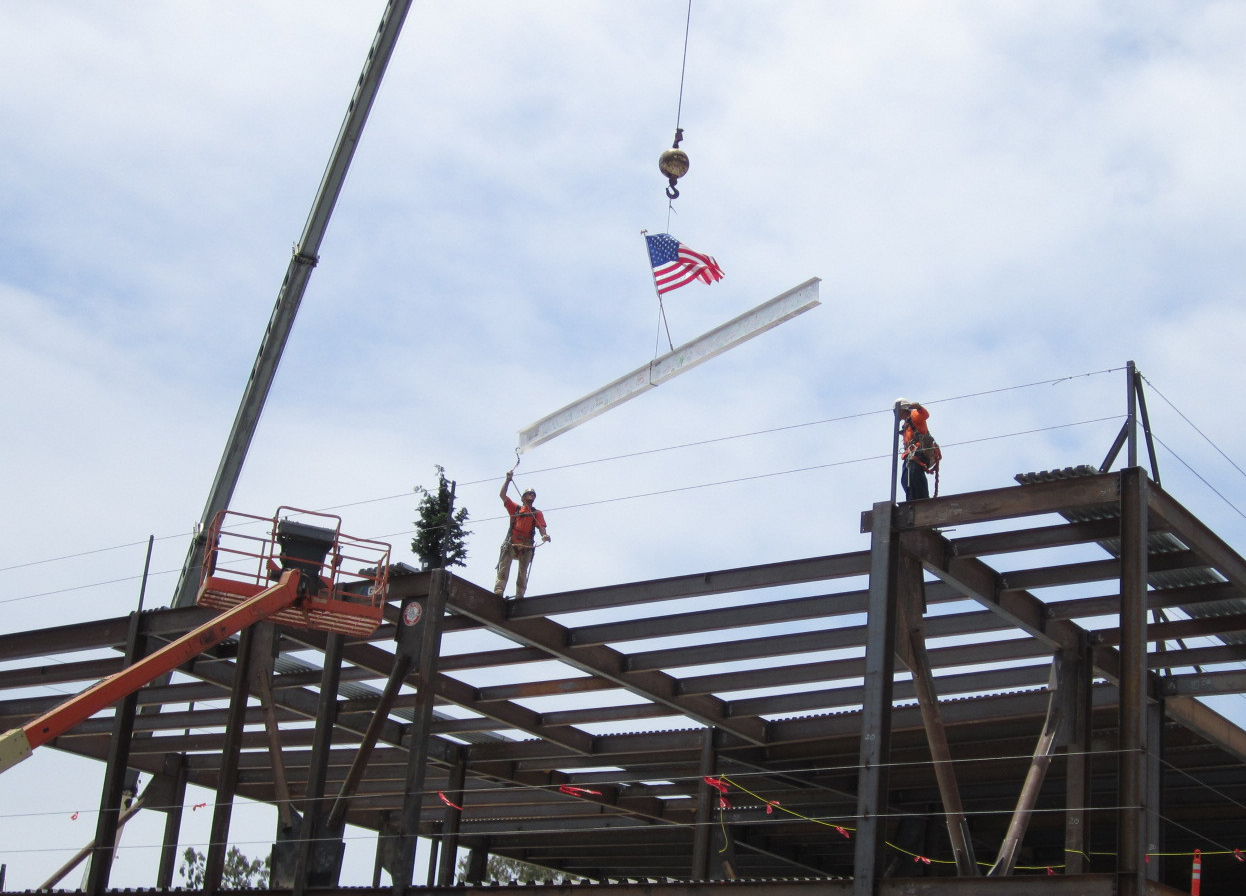 ST. LOUIS, Mo. — A topping-out ceremony was held July 27 at the site of the new Goleta Valley Cottage Hospital in Goleta, Calif. HBE Corporation crews laid the last 26-foot, 500-pound steel beam at the top of the future hospital’s steel structure. An American flag and an evergreen tree symbolizing good luck and prosperity were attached to the topping off beam, which also donned signatures from workers and donors.
More than 100 guests, including representatives from HBE, city of Goleta Planning Commission , Goleta Valley Cottage Hospital Foundation Trustees and Cottage Health System Board of Directors attended the topping-out ceremony and luncheon. HBE Corporation is providing architecture, engineering services, construction and sitework on the project.
“I am honored to be here today to represent HBE Corporation during this important target milestone in the construction process, which represents placement of the last piece of 1,000 tons of structural steel,” said Jim Moore, HBE vice-president, during the ceremony. “We are proud of our longstanding working relationship with Cottage Health System since the early 90’s and we appreciate the opportunity to design and construct this new facility that will serve the future needs of the growing community of Goleta Valley .”
Construction on the 148,000-square-foot hospital is expected to be complete in late 2013 and will replace an adjacent 46-year-old hospital which will be demolished after the new one is finished.
“This $114 million project is one of the most ambitious construction efforts ever seen in the Goleta Valley, and here we are gathered on the first floor of the future Goleta Valley Cottage Hospital to celebrate this important benchmark in its construction. This also marks an important milestone for the health and vitality of Cottage Health System,” said Gretchen Milligan, chair, Cottage Health System Board of Directors.
The new facility will have 20 emergency room beds, the number of surgical suites will increase from four to six, and it will have 44 private medical/surgical rooms, eight intensive care rooms, a dedicated endoscopy suite and four hyperbaric oxygen chambers.
ABOUT HBE:
HBE is the nation’s leading designer and builder of hospitals, including replacement hospitals and hospital renovations and additions.  The company has completed more than one thousand health care projects across the United States, and was recently ranked by Modern Healthcare magazine as the number one hospital design-build firm in the nation.  Headquartered in St. Louis, HBE ranks as one of the largest privately held companies in St. Louis with a staff of 400 people including architects, engineers and construction professionals. Visit www.hbecorp.com.