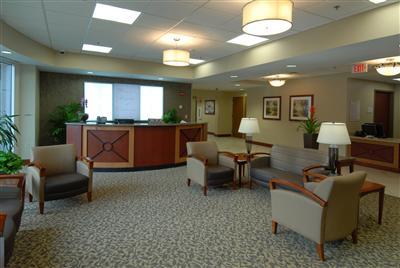 NASHVILLE, Tenn. — As Middle Tennessee’s only freestanding hospital dedicated to the care of women and babies, The Women’s Hospital at Centennial could not afford delays in renovating the devastation incurred from the 2010 Nashville flood.

“As a Nashvillian, I witnessed first-hand the devastation and renovation woes that the flood created for homes and businesses,” said Joann Ettien, administrator and chief operating officer of The Women’s Hospital at Centennial. “We did not let the flood affect hospital operations and used it as an opportunity to update and relocate various hospital spaces.”

“We moved quickly so the renovation would be as seamless as possible for The Women’s Hospital,” said Pam Faulkner, senior designer of Inner Design Studio and head designer for the Centennial project. “Since it was essentially a flood restoration, the construction moved at a faster pace. Within a day and a half, the construction crew had all the drywall cut out and prepped for us to come in. We completed this renovation in under a year, which is unheard of. Most renovations of this size take much longer.”

Within the renovation process, Inner Design Studio’s main task was relocating the OB/GYN emergency department—previously located on the eighth floor—to the first floor, which is also the main entrance. Relocating this area was a top priority for The Women’s Hospital in order to make the department more accessible to patients. 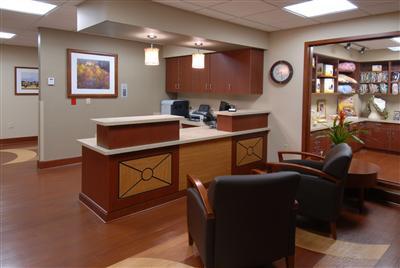 Originally, the first floor was an admission area, but flood-prompted renovations allowed Inner Design to create additional areas within the first floor including the OB/GYN emergency department as well as a new lactation area with consultation rooms and physician sleep areas on the second floor that now allow Centennial to have OB/GYN staff available 24/7.

In addition, the main lobby was revamped with customized elements, including: a laminate cherry- and marble-top desk, light installation behind the reception desk that illuminates a new Women’s Hospital at Centennial signage, feature wall that mimics water instead of using an actual water feature, which poses potential health hazards and furniture that meets LEED qualifications for upholstery and wood.

Further improvements to the first floor, such as an enlarged IT area and upgrades to staff workstations, help create an improved work environment for the staff. Workstations were positioned to be adjacent from each other instead of separated throughout the building. The workstation’s furniture layout encourages group workspace, but features the option for private workspace as well.

“Unexpectedly, the flood allowed The Women’s Hospital to make improvements to the hospital and created a more efficient layout,” said Faulkner. “Centennial’s new space improves accessibility for patients and makes the first floor a single point of entry for patient care.”