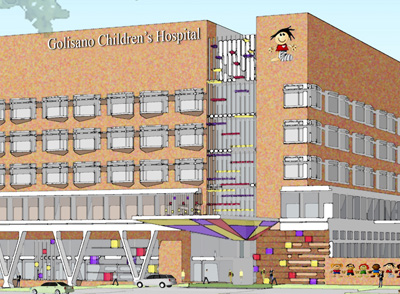 “A new facility is necessary to keep pace with medical and technological advancements and meet the modern standards of a children’s hospital,” said Tom Golisano. “I am pleased to provide this gift to help construct a new, next-generation hospital to provide the highest quality care to children throughout the region.”

“Tom’s gift will transform the way that children are cared for in upstate New York and it advances our ability to modernize Golisano Children’s Hospital for the 21st century,” said University of Rochester President Joel Seligman. “His generous decision follows a thoughtful review of construction alternatives and reflects Tom’s uncompromising desire to ensure that every dollar given goes to help our region’s children. In fact, Tom has helped us evolve the plan for a new Golisano Children’s Hospital into something more remarkable than we initially envisioned.”

This latest pledge brings Golisano’s total giving to the Children’s Hospital to $34 million, making him the University of Rochester’s most generous living donor. In addition, the Golisano Foundation has given $1.6 million to the University of Rochester’s Strong Center for Developmental Disabilities to establish the Institute for Innovative Transition.

A Better Plan
URMC’s original expansion plan called for construction of a tower that would house a combination of adults and children, and would include space for imaging services. The plan was modified in November of 2009, in favor of adding adult beds above the Wilmot Cancer Center and expanding imaging services into existing space vacated by relocated programs. That left URMC leaders to determine how to deal with the Golisano Children’s Hospital’s crowded, semi-private rooms, services that were spread throughout URMC, and facilities that did little to attract new pediatric physicians and specialized staff.

Golisano’s original $14 million gift to name the Children’s Hospital in 2002 helped URMC recruit outstanding faculty and expand programs in cardiac care, general surgery, neuromedicine, and more. But, as a hospital-within-a-hospital, the Golisano Children’s Hospital has lacked an identity and facilities that match the caliber of its programs.

“The new Golisano Children’s Hospital is the ideal setting in which to practice patient- and family-centered care for our youngest patients,” said URMC CEO Bradford C. Berk, M.D., Ph.D. “This amazing facility will ensure that children will not have to leave our community for care and that families can always remain with their hospitalized children. Plus, it will help us recruit, train and retain the very best caregivers. We are grateful beyond words.”

The new Golisano Children’s Hospital will become a single building adjacent to Strong Memorial, consolidating units that care for admitted children. It will include a new, 60-bed Neonatal Intensive Care Unit (NICU), pediatric imaging and 56 private pediatric rooms. Rooms in the new building will be one-third larger than current private rooms, ensuring greater comfort for patients, families, and caregivers. The new design will allow patients to be grouped by disease or injury, giving the hospital more opportunity to specially train nurses and other staff members to become experts in common ailments, such as asthma.

A dedicated entrance and lobby will provide easy access directly from Crittenden Boulevard. The building will be connected to Strong Memorial Hospital on the third floor, maintaining a strong link between Strong Beginnings obstetrical services and the NICU. The expanded NICU will give families more space and privacy while also providing more opportunities for families to learn to care for their fragile children before being discharged.

In the spirit of keeping the pediatric inpatient units together in one building, the Pediatric Intensive Care Unit/Pediatric Cardiac Intensive Care Unit (PICU/PCICU) and the Ronald McDonald House-within-the-Hospital will also move to the new building. The House will be rebuilt alongside the PICU/PCICU so parents staying there will be only steps from their seriously ill children. Locating the PICU/PCICU near other pediatric units is not only more convenient for families, it is australian pokies online essential to the safety of children staying in the hospital’s other units.

“When I came to Rochester in 2006, we had top-notch faculty and staff with expertise unparalleled in communities our size,” said Golisano Children’s Hospital Pediatrician-in-Chief Nina F. Schor, M.D., Ph.D. “What we were missing was the facility to match, and now, thanks to Tom, casino online we’re going to have a hospital built expressly around the needs of our patients and families.”

Timeline
Because the new construction plan differs from what the New York State Department of Health originally approved in early 2008, URMC will submit the new plans for review. URMC hopes to begin construction as early as August 2012, pending state approval, with an estimated completion of February 2015.

About Tom Golisano
In 1971, B. Thomas Golisano founded Paychex, Inc., which specializes in payroll and human resources services to small and mid-sized companies. Today, Paychex serves over half a million businesses nationwide, and Golisano continues as Chairman of the Board of the company. In addition to numerous civic, entrepreneurial, business, political, and philanthropic activities, Golisano is also the founder of the B. Thomas Golisano Foundation, one of the nation’s largest private foundations devoted exclusively to supporting programs so that people with developmental disabilities achieve their maximum potential by integrating independence, self-determination, and productivity into all facets of their lives. In April of 2002, he donated $14 million to URMC to name the Golisano Children’s Hospital.

About URMC’s Golisano Children’s Hospital
The current Golisano Children’s Hospital encompasses the fourth floor of Strong Memorial Hospital while the Neonatal Intensive Care Unit is located on the hospital’s third floor alongside obstetrical services. Today’s facilities require many patients to share a room, which is not ideal for family involvement, for infection control or for privacy.

As a regional referral center, Golisano Children’s Hospital was asked to accept 674 children from other hospitals throughout the Finger Lakes region in 2010. Because of high occupancy and the need to match patients in semi-private rooms by gender and condition, at least 20 of those children had to be diverted to other hospitals. Even though the new Children’s Hospital will not add incremental pediatric beds, switching to all private rooms will ease admissions by eliminating the inefficiency of semi-private rooms. Thus, it will help avoid the need to divert youngsters to other facilities.

As the only pediatric hospital in the Finger Lakes region, Golisano Children’s Hospital cares for 74,000 children each year. The Child Neuromedicine, Pediatric Orthopaedic, and Neonatology programs are ranked nationally by USNews & World Report and they attract children and families from across the country. Several of the hospital’s programs are unique to upstate New York, including the allogenic bone marrow transplant program and the pediatric cardiac surgery services – drawing patients from the North Country to northern Pennsylvania.