LOS ANGELES, Calif. — More than 200 community leaders and supporters celebrated the historic dedication of the nation’s most technologically advanced children’s hospital by cutting the ribbon on the new patient care building at Children’s Hospital Los Angeles. Since its humble beginnings in a small house in Chinatown 110 years ago, the hospital has evolved into a 317-bed, seven story, state-of-the-art structure that will serve generations of children in need of highly specialized care for decades to come. 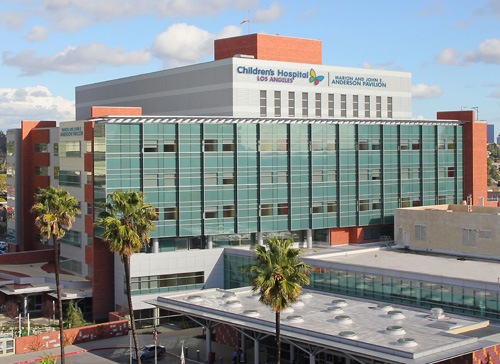 “This is an amazing day for our community that has been more than a decade in the making,” said Richard D. Cordova, FACHE, President and CEO, Children’s Hospital Los Angeles. “As a community we have designed and constructed the perfect building which is truly a work of art and certainly a precious jewel for the City of Los Angeles.”

The $636 million hospital building will usher in a new era of pediatric and adolescent healthcare not only for Angelenos but for the many patients who come from around the world to seek care. The new 460,000-square-foot structure is a family-centered care environment with every aspect of the new building designed with families in mind and nearly all patient rooms being private. The building was recently named the Marion and John E. Anderson Pavilion in honor of the philanthropists who provided the transformative $50 million gift to the project.

“What’s more important than the steel, bricks and mortar is what occurs inside with the work of our wonderful doctors, nurses and clinicians,” said Cordova. “Our team provides outstanding medical care, hope and compassion to our young patients and their families to give them the best chance at winning the many battles they face against illness, injury and disease.”

Fulfilling a Community Need
Civic leaders and hospital administrators identified the need for the new hospital building more than a decade ago. With the growth of Los Angeles and patients traveling from throughout the world to seek care from the expert physicians, demand for services exceeded the current hospital capacity. The new Anderson Pavilion allows for increased access, expanded patient-care services and the ability to recruit new physicians in key specialties.

When fundraising efforts were launched nearly 10 years ago, the original goal was to raise $350 million. Along the way, skyrocketing materials costs and a difficult economy forced the hospital’s Board of Trustees to increase the goal to $500 million in 2006 and again to $750 million in 2008. Despite these and other obstacles, hospital leadership as well as donors throughout the region rose to the challenge.

The dedication and support of Southern California residents eventually led to more than $1 billion being raised for the new building and other critical programs and research, which is the largest-ever single fundraising campaign in the nation by a freestanding, independent children’s hospital. Known as Living Proof: the Campaign for Children’s Hospital Los Angeles, an unprecedented 737,743 individual gifts were received.

Just the Facts
Architectural firm of Zimmer Gunsul Frasca Architects designed the award-winning building, while Rudolph & Sletten, Inc., constructed the facility. Key elements of the new pavilion include:
•    It is licensed for 317 beds, 85 percent of which are private rooms;
•    To meet growing demand, more than one-third of beds will be intensive care beds, which is a 63 percent increase over current hospital capacity;
•    Design is based on the varied California landscape with each floor featuring a different region of the state: from the desert to the ocean to a child’s own backyard;
•    Designed with families in mind with each patient room featuring a daybed to allow parents or caregivers to stay at the patient bedside;
•    Patients, families and staff will dine in style at the HBO Café, a Hollywood-themed dining space featuring large windows, indoor skylights and outdoor seating;
•    Patients and visiting children will enjoy the Jane Vruwink Palmer Healing and Play Garden.

Past and Present
Children’s Hospital Los Angeles opened in 1901 amid humble beginnings in a small house on Castellar Street in what is now Chinatown. The hospital’s lone physician made house calls on horseback and its “surgery suite” was formerly the house’s pantry. It was the first children’s hospital in the region and admitted 14 patients during its inaugural year.

Today, the hospital is one of the nation’s top-ranked children’s hospitals. The hospital cares for more than 10,000 inpatients, 300,000 outpatient visits and more than 65,000 patients in the emergency department annually. It has been named the best children’s hospital in California and among the best in the nation for clinical excellence with its selection to the prestigious US News & World Report Honor Roll for 2011-12. It is also one of America’s premier teaching hospitals, affiliated with the Keck School of Medicine of the University of Southern California since 1932. The Saban Research Institute of Children’s Hospital Los Angeles is known internationally as one of the largest and most productive pediatric research facilities in the United States.

A New Beginning
As the hospital began celebrating its 110th anniversary this year, Children’s Hospital Los Angeles launched a major re-branding initiative that includes a new look, new message and the missing apostrophe in “Childrens,” which was left out due a faulty typewriter key in 1901. The institution — which is the first children’s hospital in Los Angeles — recently unveiled a new logo featuring a symbolic butterfly to represent the incredible transformations that take place every day within its walls, as well as a new tagline that drives to the heartbeat of its mission: “We Treat Kids Better.” The hospital also initiated a city-wide ad campaign —including billboards, print, radio, bus wraps and other multimedia — to educate the community on its expanded services with the new pavilion.
For more information, visit www.CHLA.org. Follow on Twitter, Facebook, YouTube and LinkedIn, or visit www.WeAreChildrens.org.