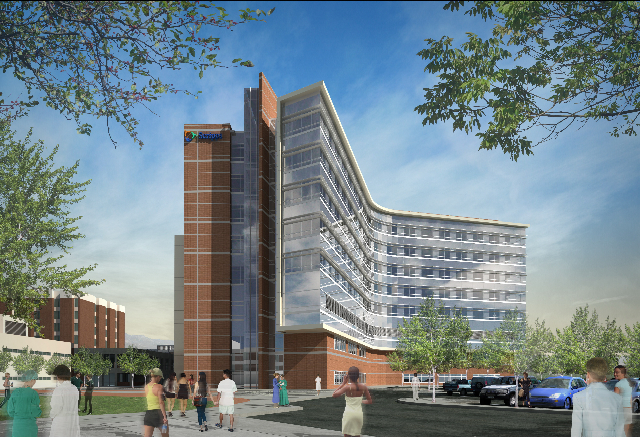 Scripps Health retained McCarthy as the design-assist general contractor in early 2009 and, since then, the firm has been working on preconstruction for the new $456 million facility.  Jacobs Engineering Group Inc. is serving as the construction management firm on behalf of Scripps Health.  HOK Architects is the project architect.

“We’re privileged to partner with recognized healthcare facility specialists like McCarthy and HOK to build this innovative, patient-centric facility,” said Rich McMahon, executive construction manager for Jacobs. “We’re looking forward to delivering a facility that reflects the most advanced healthcare design principles, while serving as a model for specialized heart care facilities across the country.”

The Scripps Cardiovascular Institute is the first of three new towers planned at the Scripps Memorial Hospital La Jolla campus as part of its 25-year master plan, unveiled in November 2010.  The new towers, which will eventually replace the existing hospital, will meet state earthquake safety mandates, while forming the most comprehensive medical campus in the region. The campus also will include research and graduate medical education facilities, an outpatient treatment center and medical offices.

Unparalleled in its kind, the new Scripps Cardiovascular Institute will serve as a destination hospital for cardiac care on the West Coast. The facility will offer the highly respected cardiology programs of Scripps Memorial Hospital La Jolla, Scripps Clinic/Scripps Green Hospital, and Kaiser Permanente to provide patients with cardiovascular diseases the most advanced treatment options available, while also serving as a center for medical research, clinical trials and graduate medical education. Scripps and Kaiser recently agreed to a 10-year extension of their 30-year partnership.

The brick and glass, steel-framed tower will encompass 10 levels, including a basement, intermediate mechanical level and rooftop mechanical level. The building will accommodate 60 beds on two ICU levels, 108 beds on three medical surgery levels, six state-of-the-art operating rooms, four CATH/EP labs, one sterile processing department and one imaging department. A tunnel will be built to connect the basement and ground levels to the existing hospital.

The building design, which incorporates numerous sustainable design principles, was developed with input from physicians, nurses and clinical staff to ensure efficiencies that will foster exceptional care in a safe, comforting environment.  Large expanses of windows will take advantage of natural light, and water- and energy-saving systems and devises will be incorporated wherever possible.

Situated 1,600 feet away, the new Central Energy Plant will be a cast-in-place concrete structure encompassing three levels, with two of the levels located below grade. The energy plant will provide air conditioning, heating, medical gas, steam, fuel storage, waste storage, and emergency generators for the hospital.

“The location of these projects, right at the Genesee off-ramp on I-5 and in the middle of a crowded hospital campus, will pose logistical issues in terms of material deliveries and general access by workers,” stated Steve Van Dyke, project director for McCarthy. “Another significant challenge the project team faces is the distance of the energy plant from the new tower. A utility corridor is being built to facilitate connection to the operating systems one-third-mile away.”

Van Dyke went on to explain that the exterior building skin system that utilizes brick and extensive curtain wall will be another important aspect of the project. A mockup was built and is currently being tested at Smith-Emery Laboratories in Los Angeles to ensure that the building materials and methods withstand specific weather conditions.

KPFF, Inc. is the structural and civil engineer, X-NTH is the mechanical engineer, and MWPA is the landscape architect.

About McCarthy:
McCarthy is the nation’s 10th largest domestic general contractor (Engineering News-Record, May 2010) and has been ranked among the top five healthcare builders in the nation and among California’s top five green contractors (California Construction, May 2010). In Southern California, the firm has completed over $2.4 billion in healthcare work for the region’s most elite healthcare institutions.  In addition to San Diego, McCarthy has offices in Newport Beach, Sacramento and San Francisco, Calif.; Phoenix; Las Vegas; Dallas; Houston; St. Louis and Atlanta. McCarthy is 100 percent employee owned. More information about the company is available online at www.mccarthy.com.