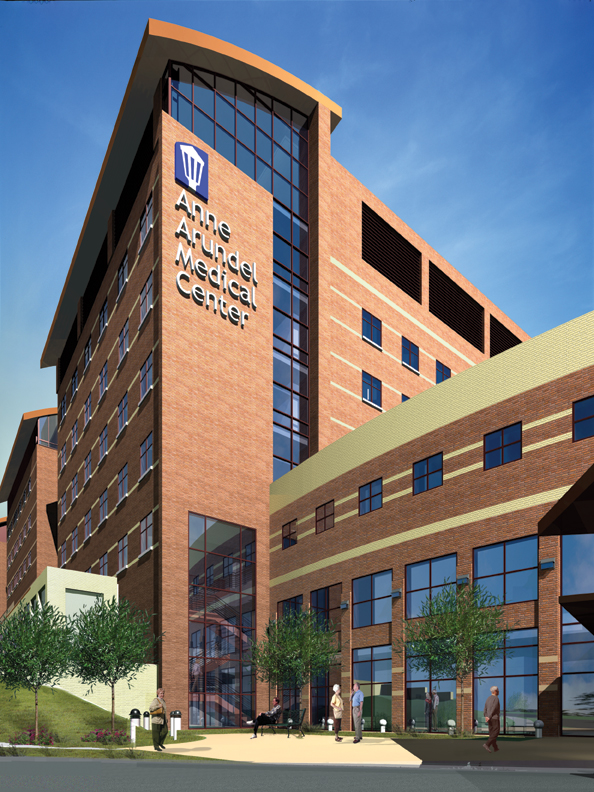 The tower opening is the culmination of a six-year $424 million expansion which has doubled the size of AAMC’s existing space by adding new medical facilities, buildings, walkways and parking garages to its Medical Park campus in Annapolis. At the event, before an audience of some 400 guests, the AAMC Foundation announced the success of its $44 million Care Like no Other landmark capital campaign.

The new tower includes an expanded emergency room for adults designed to treat some 100,000 patients annually, a new, dedicated pediatric emergency room and pediatric in-patient unit, 50 new private patient rooms, eight new operating rooms and a new 1,600-space garage for more free parking. In addition, the pavilion is on track to be the only acute care facility in Maryland to achieve LEED silver certification (Leadership in Energy and Environmental Design), as set by the U.S. Green Building Council.

“Anne Arundel Medical Center has been growing to meet the community’s needs since 1902,” said Martin L. Doordan, chief executive officer, Anne Arundel Health System. “We took a huge leap when we moved from downtown Annapolis ten years ago, and this latest expansion is one more step to ensure that we continue to be the premiere healthcare destination for this region.”

The ribbon-cutting ceremony marks the conclusion of AAMC’s Vision 2010—an undertaking which has resulted in expanded patient care service and programs and the facilities to contain them. On the Medical Park campus, the expansion includes a Level IIIB Neonatal Intensive Care Unit, a recently-opened Health Sciences Pavilion, two pedestrian skyways, four parking garages, and now the new patient pavilion. It also has included regional facilities, such as the community-based center on Kent Island providing both primary and specialty care services.

“As Vision 2010 draws to a close, we are reminded of how rapidly we have grown to serve the people who need us,” said Victoria Bayless, president, Anne Arundel Health System. “While this stunning new building is a point of pride for all of us, it’s the dedicated staff who work here that will make it successful. Finally, we have the right spaces for them to do what they need to do to take care of all of us.”

“As the third busiest hospital in the Baltimore-area, this additional space is critical to ensure we can continue to deliver the extraordinary level of care our patients expect,” said Doug Mitchell, president, Medical Staff, Anne Arundel Medical Center. “This is a very exciting time to practice medicine at AAMC.”

“Anne Arundel Medical Center has a very clear vision for its future and the success of this campaign ensures that it has the ability to see it through,” said John Belcher, chairman of the AAMC Foundation Board of Directors, and chairman and CEO of ARINC, Inc.

“This has been a remarkable campaign, especially during these times,” said Lisa Hillman, president of the AAMC Foundation. “It is a true testament to the important role our hospital plays in this community.”